Stephen Graff's River Dawn (Amazon, Amazon U.K.) is a post-apocalyptic novel set a few generations after a generalized collapse caused by global warming.  The story is set along what is referred to as the "Black River", and with sparse technology still available,  reminds one a little of an evil counterpart to Huck Finn's Mississippi River.  The odd ending of the story implies that there is was at least originally the intention of a sequel. 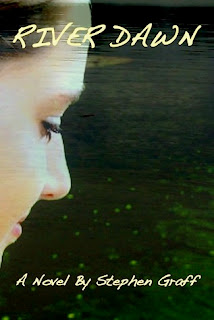 Steffen Graff is an elementary school teacher, playwright, musician, and fledgling bee keeper who lives in the Philadelphia, PA, bedroom community of Woodbury, New Jersey with his wife and pre-teen daughter who all play at family events in their musical group, Kids at Heart.
The novel was not intended to fit within any specific genre, but to my mind shares a common dystopian-apocalyptic, somewhat fanciful, view with Summer of the Apocalypse, and Soft Apocalypse, all written by educators.

From the blurb at Good Reads:

Two teenage girls--one living in the present, another living in a bleak distant future--make contact across time and space in this coming of age dystopian. In the present, 15 year old Alice and her family are on a journey of discovery, traveling through a vast tidal marsh. She notices the fading beauty of a natural world starting to fray--just as her own family falls apart. In the distant future, another Alice is on a journey through a dark, flooded world on the verge of dying. It is a savage landscape of forest, black water, and death. River dwellers struggle to survive, and despots roam the flood plain looking for followers to brainwash and victims to kill.

The blurb almost sounds straightforward, the novel is an interesting mix of ideas jumbled together to the point of incoherence.  There are various time stream issues as the plot flashes back and forth in a confusing fashion between a world at the very edge of collapse, and the primary portion of the story that deals with the post apocalyptic world.

There is a fair amount of magical realism, with the magical stretching more toward incoherence than any particular magical feel.  The author seems to take particular glee in making the one religious figure an evil figure, along with the mostly ineffectual remaining scientists.  Since the author has great fun taking shots at "Russell Limbaugh", and the evil minister is one of the few people who still remembers and admires him, you can take a guess at the author's politics.  Yet oddly enough, most of the women are relatively docile.  I say relatively docile, because the general incompetence and confusion displayed by almost all the books characters, combines with the chaotic storyline to make for a long story line of personal disasters all across the board.  The woman are docile in that they are mostly watching it happen, and following along with the lead set by their husbands, fathers, river guides, et cetera.

As noted at the top, the story appears to have  a sequel.  The way the author choose to break off the story is at a rather abrupt and unsatisfactory point in the storyline.  Truthfully the last few chapters read more like the common "teasers" you see highlighting the next book in a series, and would have been better treated that way.  If this is the actual intended ending, than the simple conclusion is that the author is inept.  I am familiar with cliff hanger ending, where the final fate of the protagonist is unknown, but this isn't it.  It would be more like if Tolkien had ended the Lord of the Rings in the middle of Sam and Frodo talking about making lunch, rather then if he had Golumn grasping at the ring perched at the lip of the volcano and left you guessing there.  One point is a place of tension, one is not.
We now come to our two descriptive (not qualitative) ratings: 1 to 7 with 4 the mid-point and 7 high. Realism does not include the cause of the collapse or apocalypse, but is otherwise an assessment of how close to today's world is the setting. Could you imagine your friends, or families living through the situation. Readability is not literary merits, but literally how quick and painless of a read.
Magical realism tends to have the sort of realism associated with a dream state.  The images may be realistic, but events don't naturally fall from one another in a logical sequence.  There are no elves, or dragons, but what occurs within the "normal" post-collapse setting is odd, and hard to follow.  That there are time travel elements to some of the novels sequence doesn't help much either.  The element of small groups wandering around, with a fair amount of friction between them is fairly plausible, but it doesn't go much beyond that.  It is a 2.
Magical realism also infects the books readability.  Although initially a way to inject the magic into the mundane, and to make a greater story out of lesser events, magical realism in its hackneyed version takes mundane, uninteresting stories, and disguises them by making them hard to understand.  I have never seen a story that used this methodology not get at least one positive review from someone. That the same someone can't always seem to tell you what it was about is beside the point. There is an obvious audience for this confusion.  It does not make for easy reading.  This is one of those novels I dropped for a while, and only with effort picked up again to finish.  It is a 1.
Posted by russell1200 at 7:00 AM

Educators, male or female, are all focused on the female, period. They can only see the world through one gender specific lens.

Even in their fiction I guess :)

Pioneer: Oddly enough, although the author would likely deny it, the women here tend to be a pretty weak bunch. Oddly, it is not a dystopian situation (Handmaid's Tale) where they are forced into weakness. It's just that they all seem pretty wimpy.