Ryan Henry's Omega Zero (Amazon-Kindle) is  a pandemic  apocalypse-in-progress that takes place in the vicinity of Waynesboro, Virginia at the edge of the Appalachian Mountains.  Our "hero" is an ex-U.S. Marine gone bad:  a meth. dealer.  An undercover buy has our hero to fleeing into the mountains causing him to miss the first wave of the die off.  When he comes down from the mountains, it is to a different world. 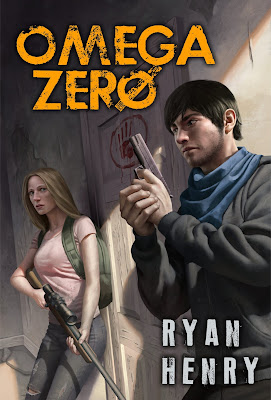 Ryan Henry is musician, featuring in a doom/death metal bands including Necare, and  Reclusiam.  He had a previous zombie survival novel "Six" (mostly lost online as a pdf,  with some rpg tie-ins Lucy pdf and Zack pdf).  He currently lives in Virginia Beach, Virginia with what he describes as his patient wife and spirited daughter.

The novel is relatively short in length with the author noting that he was trying to write a short Western Style novel in the vein of Louis L'Amour.  To my mind, it's like Louis L'Amour on acid.
As we noted our hero above, our hero comes down from the mountains and find the world has changed.  Something like 90%+ of the people are dead, or going to die soon. He fairly quickly teams up with a young lady of about his age, and they attempt to make a go of it.  Unfortunately, some of the people surviving work for the government, and since they are not all "immunes", their methods are a little heavy handed.
Both of the two are stubborn, the young lady is actually (and admittedly by both) more competent at some survival skills.  Although the meat of their story takes place over a relatively short, and violent time period, they might under normal circumstances have been able to make a go of it.  But just as in the normal world we live in, this apocalyptic world has people in it, and these people mess things up.  They make bad decisions, wrong decisions, and sometimes evil decisions, and those decisions effect our couple.  Just as we eventually come to see that the couple decisions come to effect others.

Did I like it?  It is an odd novel of this type in that the ending is stronger than the beginning  Most of these novels start with a bang, and then fall apart.  This one I would say is more the reverse.  It is within a grim world, were all our hopes, memories, and aspirations, for good, or evil, are fairly pointless.  Fate rules all in the end, and here Fate is a pretty grim figure.  Through the middle portions of the story it looked like it was going to turn into a tiresome, good guys-bad guys story, but the ending reframed much of the earlier story.  So in the end, I did enjoy the story.

We will move on to our two descriptive ratings Realism and Readability: 1 to 7: 4 is the mid-point and 7 is high.

The plague is almost magically virulent. As described, it is not clear that the effect would actually work as described.   Even the very deadly Spanish Flu of 1918 rolled around the world in much slower waves.  It is unclear if the author understands the true population density of the U.S.  Even a relatively small suburban development (100 homes) is going to have 3 to 5 survivors normally.  Although I don't generally take a knock at the "cause" of the collapse in this category, in this case it has an ongoing effect on the story.

The primary timeline does deal with some survival issues in a realistic fashion, but they are not at the heart of the story.  That the virus strikes much closer to home than in many of these stories, is realistic.  In a lot of pandemic stories, the clever few can stay a step ahead of the beast.  Not here.  Hard to put an exact finger on it, but giving it a slight bonus for at least worrying about some elementary survival issues, we will call it a 5.

Readability:  Not its literary merit, but how literally how quick and easy to comprehend.

It moves fairly quickly.  It is not an overly lengthy novel.  Some of the middle portion of the plot line start looking a little like a militia style story, and gets to be a little tiresome, but the plot is generally straight forward.  You are not kept waiting for the next course of action.  Just shy of a true page turner, and without to much obfuscating symbolism to interrupt the action, it is a 6.
Posted by russell1200 at 7:00 AM

Interesting. What is weird enough about it for you to say "On acid" though?

Good review but I'm not sure myself.

Pioneer: I wrote that shorty after reading it, and my mind is a little fuzzy on the specific line of thought. But everything from a meth-dealing hero, to the very jumbled up nature of who are the good guys and who are the bad guys makes it very un-Cowboy Western. This is not a Western morality tale, or even a Spaghetti-western anti-hero sort of movie. It is definitely a bit twisted with even some of the moral situations becoming twisted around with new knowledge.

Francis: Thanks - to some degree I find it is as much a matter of how much time high have as anything else which determines what gets read.

As a general aside- punk rocker types writing apocalyptic fiction always seem to write some very different, interesting stories, even if they don't always pan out in the end. Seems like this is the third, and all three were at least noteworthy.