John Varley's Slow Apocalypse is an apocalypse-in-progress featuring an extreme version of peak oil:  an oil eating bacteria.  The novel is set in Los Angeles and a variety of Southern Californian potential catastrophes are thrown into the mix. 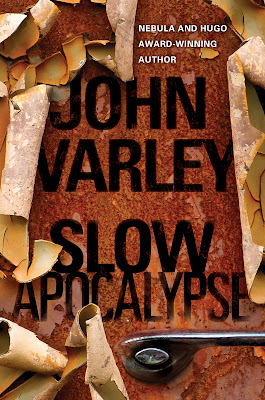 John Varley (1947) is a fairly well known hard-science fiction writer.  He was born and grew up in Texas, but for a little while lived in Los Angeles and tried to make a living as a screen writer.  Some of this book's back story, no doubt, comes from that experience.  He has stated that while this novel has a science fiction plot device (engineered microbe eats oil), that it is an attempt to reach a broader market beyond the hard sci fi crowd.

The story is set in the general area of Los Angeles.  It starts with a bang.  The narrator has been interviewing an ex-CIA spy type, and after the spy type gives him an inside warning about what is to come, he witnesses the defenestration of his informant.  The information had already been convincing, but witnessing the connection of source with ground at velocity punctuates the immediacy of the situation.

In effect, someone in a bio-terror lab in the United States, on their own initiative, works to extract revenge against the Arabs for 911.  It works, but too well.  The microbe that they insert into the Saudi Arabian fields that eats and destroys the subsurface oil, mutates, becomes airborne, and relatively quickly begins to spread to the rest of the worlds active oil fields.  At the point that our protagonist learns what is going on, it is obvious that there is a news black-out, and the U.S. government, along with others in the know, are not telling the truth about what is going on.  This means there is no real way to alert the general public, but also means that our non-prepper Hollywood script writer has a jump on most people with regards to what is coming, and better, has a pretty clear time line (within a few months) of when it is coming.

Varley went out of his way to make the scenario "real".  I imagine those who know Los Angeles will find it an odd trip through the scenery.  The author notes in an interview at Clarkesworld:

All the locations in the book are scrupulously accurate. Much of that was enabled by actually driving and walking around in the areas I covered and taking pictures. The only location that was fictionalized was the Marshall's house. I used an actual house on an actual site in the Hollywood Hills as the model, but I placed it elsewhere. There is a Mockingbird Lane in that area, but it's in a different location from where I have it.

It would have been much harder to write the book without Google Street View.

Although the apocalypse is described as slow, the slowness would be in comparison to the typical nuclear or pandemic story; The entire body of the story is only about nine-months long with the main disaster sequence seeming to run from early Spring to sometime in Autumn.   Some of the disaster story is peculiar to the Los Angeles area.  The microbes eating the oil generates heat, and tends to cause fires, and the shifting around causes seismic issues.  With Los Angeles sitting right on top of some oil fields neither feature is good for LA.  The main difference between this story, and say the Lee Goldberg's The Walk is that the rest of the country is not in a position to come to Los Angelos' aid.  If LA is shaking and burning, the rest of the U.S.A. is out of fuel.  For the main characters in our story, the slow collapse comes from the increasingly untenable position that they find themselves in.  Prepping in place doesn't work in the middle of the Los Angeles Urban zone. So prepared or not, they eventual need to leave.

Varley buys into some ideas common to the modern secular apocalyptic genre:  a government remote, and frequently working at cross purposes to the governed, the over-extended nature of modern society, the isolation of people from their neighbors today, and that getting out of the big city is not a bad idea.

As a main stream author, his approach is a little more balanced than your typical genre "enthusiast".  Although sceptical of modern technology, he does not have a problem with the social changes that have occurred with the modern age: independent women, gay relationships, a more secular view of the world.  But he is not a polemicist for these changes either.  He fully notes that in a collapsed society, single women on their own are going to have special risks, in relation to the various bad guys trying to take advantage of the situation.  The main bad guys our group runs into are caucasian bikers, but other racial groups do make an appearance, and they are not always behaving well either.

The characters are very real. They have their weaknesses and strength. Varley is known for strong women characters, and the women are active participants in this novel.  They are not the lead hero, and they are not the superheroic ninja bow fighters killing many multitudes before breakfast types.  But they do their share of rising to the occasion.  Our group is a variety of normal folks, a few of whom of relevant skills (one is ex-military, another is a doctor). The good folks waffle around, run into obstacles, and unusual for this type of novel, do a lot of back tracking rather than fighting. They feel bad about all the hungry people, and even try to help a few occasionally. They get into a few brief, but rather severe fights with bad guys. The bad guys aren't using overly sophisticated tactics, nor are our heroes.

There is a bit of a cozy ending.  The author, even with the hippi-like buy-in with the new social paradigm of today, has issues with the modern world, and like many authors coming from a very different world view, sees value in the values of older, more communal styles of living.  He does not wave away all the future threats, at times actually sounding a little militia-like in his concerns, but he does the typical cozy thing of dwelling as much on the positives of the new life.   You may hear about the enormous fatalities, but you experience the new lifestyle.  Since the prepper families are accepted in by a community, they are not one of the statistics.

On a note before we start wrapping up.  The device off an oil eating bacteria getting loose is not at all a new one.  Kevin J. Anderson and Doug Beason used it in their apocalyptic  Ill Wind,  Bob Reisss in the rather odd thriller Black Monday, and Kyle Mills in his semi-apocalyptic thriller Darkness Falls. Amy Roger's Petroplague is even set in the Los Angeles area.  And for those who are a little curious about the plausibility of the scenario, there are real petroleum metabolizing bacterias out there being researched on (one example).  I had no idea there was such a wealth in goo gobbling little guys: fictional or otherwise.

Did I enjoy the story. Yes, it was interesting.  After the initial rush (or drop) into the scenario, there were a few times that it seemed as much like the poky-apocalypse rather than a slow one.  A lot of detail is covered in trips around town, describing various points of note that have been crushed, that doesn't seem to move the story along particularly well.  Some of the traveling scenes are actually rather plodding, which is an odd fate for portions of the story where much of the action is going to occur.  So while I liked it, I temper my enthusiasm.

We move on to our descriptive (versus qualitative) ratings:  Realism and Readability.  Rating 1 to 7 with 4 as the midpoint, and 7 is high.

Realism is straight forward.  It is near future science fiction, and we don't count the cause of a collapse against this rating: a stand-in for peak oil issues will do.  There are issues of supply, distance, appropriate skill sets, inter-group cooperation, risk from predators, etc.  There are a couple places the activities plausibility gets a little fuzzy to me, but the good guys are not completely bullet proof.  It is a seven.

Readability is not literary merit, but a description of how easy it is to read.  It is not a quick read pager turner, or comic book for that matter, but there is not a lot of obscure symbolism to weed through either: no magical realism to be found here.  Somewhere I saw Varley's writing style described as being "sparse" and that holds true here.  I am going to be cautious and say it  is a 5.
Posted by russell1200 at 7:00 AM

I do like the sound of it especially because it's different!

Francis: One nice thing about the "apocalyptic" genre is that while there are a few different storylines (Road Warrior, Militia novels, Bugout from the city/civilization, barbarians in a pa wilderness for examples) that can get beat to death. There is still a lot of room for creativity.

There is a minor subset of novels that cover in-place riding out the apocalypse, but they are usually in suburbia, not LA.