Vanessa Veselka's Zazen is a an soft apocalypse in progress.  Extrapolating on current (negative of course) trends, the United States is suffering a slow grinding social and economic collapse.  The story is told from the viewpoint of an over educated waitress with punk-hard left sensibilities living in (likely) Portland, Oregon. 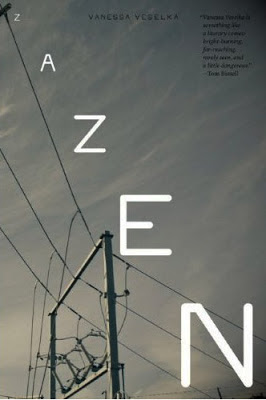 Vanessa Veselka, now a resident of Portland, Oregon. has slightly confusing.  The various biographies you pick up on line (here and here) don't piece together all that well.   She identifies herself as having  been a teenage runaway, an expatriate, a union organizer, cab driver and a student of paleontology.  At some point her biographies added train jumper and sex worker (teenaged more than a stripper-less than a hooker), but those items appear to have been dropped. She is a mother, was a punk  musician (and quieter under own name), and now writer. This novel, her first, won the $25,000 PEN/Robert W. Bingham Prize that  "represents distinguished literary achievement and suggests great promise."
The novel has made a splash in the main stream media circles.  Which is likely why it hasn't had much notice from the dystopian/apocalypse niche folks - pushed through different marketing channels.  It is a grab bag of entertainment.  As Levi Asher at Literary Kicks put it:

The book has all this.  Because he is "literary", Mr. Asher downplays the dystopia and the apocalyptic elements that are the central glue of the story.  It is a coming of age story for the slightly older quarter-life crises set.  The title, Zazen, is the meditative position used in Zen Buddhism.  This mixed grabbag of realities is the meditations of an aging left leaning feminist punk rocker.
Because this is a punk-anarchist view of the world, the left is skewered at least as much as the right is.  Our anti-hero Della, the paleontologist trained waitress, has some leftover hippy parents with extreme views.  Nothing makes them happier in life than to see their son marry an African American woman, or their daughter show up at a family occasion with her girlfriend- multiculturalism as message.  For someone who has been a union organizer, the author takes some surprising shots at the way which unions support the status quo within a dystopian society so as to be able to work within the system.  This of course highlights the anarchist-punk arguments of being captured by the system when you try to work within it.  The slow Republicanizing of the Tea Party, would be the analogy from The Right.

The greater point of the book seems to be the attempt of an individual to not only make sense of the chaos that is our world, but also to have a meaningful purpose.  Various wanna-be architects of change consistently fail to have any effect what-so-ever while a case of mistaken blame/death leads to major social upheavals.  The very beginning of the book has Della  wondering at the Buddhists who set themselves on fire in protest and are able to remain still and calm while they burn alive.  Near the end, in a discussion with a young delinquent -skate boarder that Della runs across somewhat at random:

I took one more beer and let him have the rest.  The sun was setting and I wanted to say something helpful but I know he wouldn't understand so  I said something stupid that made no sense because I had been thinking things all day and there was no way I could explain them and I shouldn't even have tried.

"Everythings on fire," I said . "The guy who won't sell you the beer, your dad, the Ravage all around us, your feelings about the music you like, it's all on fire."

"Well I wish it was fire for real," he said and kicked his board down, "because this all sucks."

"Yeah, well, me too. I wish it had all burned away so I wouldn't have to watch."

At one point Della is asked?

I understand your a scientist?

I am a waitress.

What do you study?

The authoress (as told in the acknowledgements) describe Della to her five-year old daughter as:


someone who was afraid that the world was full of sadness and that everything beautiful just got hurt.  Violet looked at me for a second than said, "Yeah, but Della's Wrong."

Although the excerpts might make it seem like a post-modern Buddhist text, the proceedings are not that heavy handed.  There is far too much farce and humor, and it doesn't come off as particularly pedantic.

So based on the fact that I have quoted from the text and was not picking it to pieces, I think it would be fair to say that I liked the book.  Della is a bit detached from her surroundings, and it is rather obvious that she is herself recovering from some unknown trauma, but her detachment is a very common type of detachment in our modern world;  Her desire to make sense of the world, and have some real stake in it is met with the wall of confusion and difference that makes up our modern world.  She tries to map it out, but the interconnections all loop around back on each other, and in the end it is just all too chaotic.  While very much a left leaning tract, the deadliest barbs are directed at the follies of the left, both the establishment left, and the anarchist left.  The more general themes about the nature of reality, or understanding of it, and our place in it, are universal themes.
We have our descriptive (versus qualitative) ratings: Realism and readability:  1 to 7, 4 the midpoint,  7 being high.
Realism is a little difficult because satire to some degree is intentionally unrealistic.  It overplays its hand.  But the world is a strange place when get off your couch and turn off the television, so a lot of the satire here is not all that far off mark.  The setting is a natural extrapolation of today's trends not that far off in the future.  There is actually some technical matter, if not exactly a how-to manual, buried within.  It is a six.
Readability is literally how easy of a read is it.

It's not a comic book.  The story is a little meandering and confused at times- confusing in the way that life can be confusing.  It's mostly mundane life with odd little bits that begin to add up to a more menacing situation.  Matters of deep philosophy lurk throughout the undercurrents so there is some effort at literary execution.  Call it a literary 5.
Posted by russell1200 at 5:00 AM

I've just downloaded iStripper, and now I can watch the sexiest virtual strippers on my desktop.