Adrift on the Sea of Rains: A Review

Ian Sale's Adrift on the Sea of Rains (Apollo Quartet 2) is a longish short story (50 pages) that depicts the aftermath of an all out nuclear war as seen by a small group of U.S. astronauts that are conducting top secret experiments at their base on the moon.  Stranded on the moon, they face inevitable death if they cannot find a way to safety:  and no rescue is coming from Earth.  The second book in the series, The Eye with which the Universe Beholds Itself is due out in the Fall of 2012. 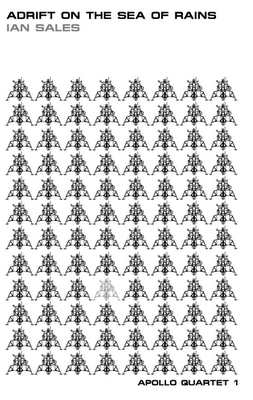 Ian Sales (alternate blog) is a British writer that has been published in a number of science fiction anthologies.  From our point of view, most notably in Catastrophia an anthology of catastrophic, apocalyptic short stories.  He is also a well known science fiction reviewer/critic.
Since it is a relatively short story I am not going to delve too much into the heart of the story.  Two points are key.  It is quickly clear that while they are not from "our Earth" they are from a very close cousin.  History has gone through the various Apollo missions, but both the space-travel part of history has been somewhat different - thus the moon base - and the political history has taken a slightly different turn - thus the catastrophic nuclear war.   The other point, is that they do have a long shot way to try and get out of their predicament.

The story is very good at giving a hard science, you are there,  feeling to a possible post-Apollo world.  The narrator is the of the mission, a United States Air Force Colonel, who unlike the real world Apollo astronauts (who were also in the Air Force), has seen a little more activity in the more combative world situation.  The story does have a good feel for the tension and paranoia of the cold war.
What the story is a little light on is activity.  There is a fair amount of bickering, and as they come up with a desperate strategy and an eventual coming together of the disparate personalities, but the story is at heart a very simple one.  The technical jargon, and frequent retrospection by the narrator make for a somewhat long 50 pages.  The ending is a little odd for a story that is supposed to go on for three more parts, and the slow pacing makes me reluctant to precede on with the series.  However, if you really like hard science, present day to near future space travel, you will love it.

Realism:  normally we don't expect ourselves, or our close loved, ones to head off to the moon, but if a singer (Sara Brightman of Phantom of the Oprah fame) can go, maybe you can as well.  The escape plan does involve a little bit of mad-scientist hand waving, and it is in a different (if close) timeline than ours, so it is does have some fantastical elements.  I will stay say it is above average:  a five.
Readability is straightforward.  It is a short story, with relatively slow pacing, and some slightly above average technical jargon.  It is not a difficult read, but its not a comic book either.  Again, it is above average at 5.

I am posting pretty much this same message on the blogs I frequently comment on.

We were not voting against Americans yesterday except for the 60% of women which have abandoned us.

These Femocrats have been inviting every "noble Savage" they can find into this country and handing them a voter form and EBT card as they shuffled through. Just to satisfy their "Avatar" wet dreams and Gina-tingles.

Voting is Force plain and simple but force that requires no skill, no courage, no honor and no strength to wield.

We have one choice now and that is to strike back starting with succession. We can either do that or go quietly into the night.

The Camp of Saints in on us.

Camp of Saints (a French Novel) as I understand it, has invited immegrants pooring into France, and then changing/destroying the very culture which was so inviting.

To my mind, if you don't like immegration to the United States, you would have to blame the U.S. businesses that bring them in to provide lower cost labor. Today at least, most of these businessmen lean Republican. It is one reason why the Wall Street Journal toes the line on the Republican line except on immegration. Around here I know many many small contractors who are fanatical Fox news watchers, and buy into the Fox News party line - except on immegration.

So while the Democrats certainly get most of the immegrant vote, and they also support immigration, I don't see this demographic change as being driven soley by them.

The Arch Druid has been having is own U.S. succession fantasy going on. He of course is coming at from a very different angle. Maybe if the first war of succession hadn't been fought by a group of slave states it would get more support.

Russ - I disagree. The companies and corporations certainly also benefit from the cheap labor but the feminist give them the political power to get away with it. We would have put a stop to it and did for years but once the fems started in with their scheme to ally every non-white male with their cause we were doomed.

There have been nativist (anti-immegrant) riots since at least the 1840s in the United States. This implies that the immegration issue is not a new one. That various groups use or abuse the newcomers to other purposes is certainly not new either. Many hard core feminists do try and make common cause with these groups. But from what I have seen, many of these groups are rather reluctant allies at best.