The Shelter: A Review

SunHi Mistwalker's The Shelter is a short story set in a dystopian apocalypse-in-progress set in contemporary America somewhere in (what appears to be) the Southeast United States: possibly Atlanta.  The tale is set from the vantage point of the newly homeless who have lost the ability to keep the roof over their head in a severe version of today's economic collapse.  The shelter in question is a seven-level parking garage that people pay rent to stay in. 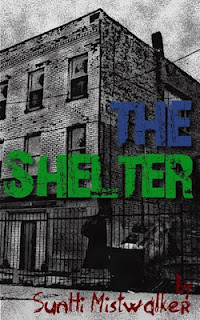 Born and raised in Chicago, SunHi Mistwalker (an online role playing handle for the anonymous author) has been specializing in writing about social collapse.  In her own words:


I made the decision to not sugarcoat some of the darker sides of childhood. I wanted to explore how poverty and societal collapse can drastically alter a child's life in ways most of us never imagine... my stories take a very intimate look at the relationships between individuals living in these corrupt societies. How does the individual and family respond to economic collapse, oppression and other nastiness created by unbelievably rotten cultures?

She appears to be currently living in Seattle, Washington.

The initial impetus for writing this short story, and the novel that is to follow, appears to have come from the author playing in an online dystopian sym-world Second Life.


Since it is a short story, we can be relatively brief.  A little girl Sunni Brown (a character, not the author) lives with her mother in an apartment building.  The story starts with the Sheriff showing up to evict them, and the two of them left fighting with the scavengers over the scraps of their belongings.  A couple days later they make their way to a low budget shelter for rent. A seven story parking deck where people live in the variously numbered parking places.  Sunni and her Mom share space number 202 with another family.  It pretty much goes downhill from there.  Sunni's Mom does not take the fall from grace well.  And Sunni is pretty much left to her own defenses in a world where the people in charge take a personal and perverse interest in little girls.  The telling is not overly graphic, but it is not a mystery as to what is going on.
The story is very dark and gritty.  The emphasis on urban homelessness reminds me of the American Apocalypse series in its (better) earlier portions.   It is missing some of the telling details of poverty.  If Sunni and her mom are so broke, how come the T.V. still has power, and the phone is still hooked up?  In what world have the bad guys ever been able to visibly molest young children without worrying about a severe fall in social status?  The author's description of the sequel I think is telling:

After four years of hellish cruelty in a sex trafficking gang, Sunni Brown moves to a southern city mired in poverty and despair. Her mom disappears and Sunni must fend for herself. But when the jaded teen meets a disillusioned cop, will hatred, rage and the burning desire for bloody revenge morph her from a helpless victim into raging vigilante?

This is realism?  I am sorry, this is wish fulfillment.  Poor children left on their own, who fall into "dystopian" hands wind up in very sad straights.  Very few of them become anything other than miserable adults.  They certainly don't become crusading vigilantes.  It is interesting that this little wishful wormhole, is that same one that Nova fell into with his urban collapse fantasy.  He added in some cowboy action gun play, but also seems to have found that the easiest story telling route to take.
Its a shame because a much more subtle telling, would make for a much deeper story.  The urban collapse novel has a lot to offer.  For one, our urban environments have been collapsing for some time, and various third world mega-cities, have squatter settlements that also could make excellent background material for what actually happens in these settings.  A clue: its not pretty, but its not what happens here either.
As far as it goes, the short story is reasonably interesting.  The idea of the parking deck squatter settlement is an interesting one.   Based on her descriptions, I probably won't be looking at the follow on novel, but this story is fine.
For our descriptive ratings: Realism and Readability: 1 to 7 with 7 being high.
With such a short story length (30 pages) it is hard to get too far off the reality course.   There are a few miscues that I noted above, but it is mostly a pretty grim telling of where your place is in the world when you have no income, and no place to stay.  What exactly is working in the economy is a little unclear.  There is still a currency that people value, and still some form of government, and government enforcement.  If the author is comfortable using a virtual roleplaying handle as her "name", I suspect she is a little clueless with regards to how the economics of these situations work.  Based on what little we see in this story, I will call it a 6.
Readability is easy.  Its only 30 pages.  It is told from the viewpoint, and language level, of a young girl.  Maybe a comic book would be easier to read, but not much else.  It is a 7.
Posted by russell1200 at 5:00 AM