David C. Waldron's Dark Road is the second in the Dark Grid series of novels.  We are two months into a massive power shutdown of the electrical grid caused by a solar storm, so I think it is still safe to call it an apocalypse-in-progress.  We are at the stage were a lot of homes have burned down, and a lot of urban-suburban folks have already died, but the folks who somehow pulled together, but were otherwise unprepared, are just about out of food.  Our review copy was provided by the books author. 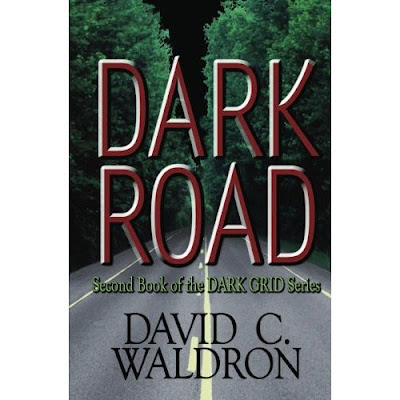 We profiled David C. Waldron earlier, when we reviewed the first book in the series. Born in 1972, lives with his wife and children, has a son involved in scouting, and is into camping, fishing, et cetera. He is self-described as a Star Wars-computer nerd.

The story starts with a split plot line that merges back together somewhere shortly after the midpoint.   One group is the main group from the first story, the Turner family,  and are camped out in Natchez Trace State Park with remnants from the Tennessee National Guard.  This group is trying to stabilize their local area.


The new plot line is a small family, Dan and Marrissa Clark, and their two pre-teen daughters who are back at the suburban neighborhood outside of Nashville, Tennessee that the Turners left a little over two-months previously.  Although the Home Owners Association (HOA) is as dictatorial as ever, they have managed to fend of unwanted intruders.  Even so, life is not so good for them. Power is still out, and water is being carried in protective foot-convoys from the distant river.  Dan, a paramedic, helps out at the ad hoc infirmary.  He can do little about the increasing suicides, and worse is unable to prevent the death of his youngest child from an unknown fever.  Food, forcibly collected by the HOA, is running short.  The couple decides to leave in search of a better place.  Through plot-driving coincident they find the key to the Turners gun safe and grab up the guns and ammo that were left behind (why?).  Additionally, they see a few clues as to where the Turners went, and decide to head off in that direction.  The story of them joining the Turners takes up much of the first half of the novel.


The moral tension of leaving a group behind, a group that had kept the family safe in their home while the worst of the mayhem was occurring, is resolved by having the chairman of the HOA and his minion-strawmen bad guys displaying no personal redeeming values.  Granted their lack of preparation had only left them with bad choices, but there doesn't seem to be a realization that this couple is simply trading off one protective group (without whom they likely would not have survived) for the very unknown potential of a nicer protective group.  Healthcare spending in 2011 was something like 18% of the GDP.  Is the need for patchup medical care going to be that scarce on the ground that the wandering paramedic with family in tow is going to be a net asset?

As with the first novel, the  pacing early on is slow.  It is not just that there are discussions, but that the discussions seem to have a lot of the windy asides.  That real life conversations are often slow and off focus, doesn't mean that reading the same type of conversation in a novel is interesting.   The dialog lacks a bit of snap. Everything is well talked over before any action occurs.  I realize in today's writing world they say to show rather than tell, but there has to be a better way to push along the story line.
Most of the second half of the novel is a not too stressful post-catastrophe survival exercise. A militia-fantasy element is introduced, which adds a little excitement, although clearly the full resolution is to be in later volumes. Given the amount of firepower, time, and equipment on hand, the National Guard units seems to do very little digging-in/fortifying in preparation for these events.


A lot of post-disaster novelist seem to fall in love with their cozy creations.  Usually there is some long drawn out Christmas scene where  everyone tries to figure out what simple gifts they can give and wax maudlin over old times,  realizing how all of this has brought us together...blah...blah....blah.  Well here, we don't have a Christmas, we have the wedding of two of the, not terribly interesting, characters from the first novel.  Which I'll grant you is a little different, but much like the faux-Christmas scenes, we get to live through all the little details.  Only the scavenged nutmeg is missing.  All the two little hamlet's children go off to find flowers.  We sit in on the pre-marriage counseling session (really! LOL).  Someone finds a wedding dress. We even get to imbibe in the post wedding toasting.  Only steely resolve kept the tears from my eyes.


Did I like it.  I am ambivalent.  The characters are generally likable if far too talkative.  Although not action packed, some of the scenes where they are scrounging around for unobvious, unnoticed supplies is interesting.


You have the slow start in getting the action going, and then a long drawn out journey to the village, which pretty much sums up to a big zero to moving along the original storyline.  Once at the village, the  situation is probably a little understressed given the circumstances.  There are all sorts of people still floating around out there, including other little surviving hamlets, yet they don't seem to have much interest in knowing what is going on out there outside of their odd little militia plot.  Given the time taken to prepare the wedding, maybe they could have gotten some scouts down to South Carolina.  It would have given an excuse for a little post-apocalyptic skirmishing, which is generally the type of writing the author pulls of best.


On the plus side the rabid patriotic fervor is not as extreme as many militia-fantasy novels of this sort.   NATO, who in real life can't even bomb Libya without our help, doesn't show up to take over Fort Knox on its way to fighting those dastardly Patriots in North Dakota.  China, with the entire Far East at its disposal, hasn't yet decide it wants San Diego and San Francisco instead.  Eco-Freak terrorists (really) decide that the loss of the power grid is sufficient to satisfy Mother Nature (video). The best writing in these novels is often in the combat scenes, and other points of tension, it is a shame there is not more of it, or at least a more efficient set up of these themes.
We now move on to our descriptive (versus qualitative) ratings:  Realism and Readability: 1 to 7 with 7 being high and thus the midpoint at 4.
Realism should be straightforward.  It is in a near future setting.  There aren't any real problems with the idea that a massive solar flare could seriously damage the grid, and that lack of food supplies will be a problem.  The author does not make the mistake of having people hiding behind barricades two-months after the disaster trying to ambush passerbies.  Two months after a disaster like this, and anyone on the road has either nothing, or too much to be safe to take on.  There is a lot of scrounging, and discussions of balancing supply loads on a (late in the day) bug out.


The biggest knock on realism is that the supply of all these interesting military units, the units that are going to be involved in either fighting for or against the take over of the remnants of the good old U.S.A. isn't discussed in any serious way.  Our little unit in Natchez State Park isn't very big.  But how are you going to supply the 101st Airborne, the 5th Special Forces Group, the 160th Special Operations Aviation Regiment, and unstated amounts of ordinance (artillery) and mechanized infantry said to be nearby.   If in very loose parlance a division is historically about 10,000 people, we are looking at about 15, 000 to 30,000 people that need to be supported out of the Fort Hood area.  I am not saying it is impossible, but it isn't very likely.  Traditionally, when units had to live off the land, they had to break up into smaller groups and also, just as importantly, they had to keep moving.  With the information, and electrical grid down, it is hard to see any of these larger sized units not atomizing into their constituent pieces.  The typical infantryman requires about 100 pounds of supplies a day if they are doing nothing.  We are going to need 750 tons (or more) of supplies a day to keep these larger units operational.  It's why only the United States has ever been able to pull off the massive scale World War 2 style invasions - you have to be amazingly wealthy.  A post-collapse, no power grid United States is not wealthy.
So while we had ranked the first novel a 7, this time we will drop it down to a 6.
Readability, which litterly intended to mean how painless is the reading process, is a bit more straightforward.  There is again the slow, and often uneven pacing.   If you take the story to be a slow moving, detailed account of the reconstruction of a couple of small towns in Tennessee, rather than some sort of action adventure tale, the plotline is pretty straight forward.  It is a non-literary 4.
Posted by russell1200 at 5:00 AM

By using BullionVault you may obtain physical gold & silver by the gram at current spot exchange rates.

Create your free account now and get 4 grams of free silver as a welcome bonus.