The Pulse: A Review

Scott B. Williams' The Pulse is a solar flare derived apocalypse-in-progress novel set in both the area in and around New Orleans, and on a sailboat on the Caribbean Sea and Gulf Coast.  It at least partly fits in with the sub-genre of post apocalyptic nautical adventure tales. 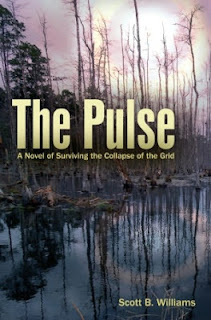 Scott B. Williams is an outdoorsman writer who has turned to the survivalist/prepping niche.  His recent works include "how-to's" on Bugging Out, and Survivalism.  He is a relatively opinionated fellow, having also produced a book of essays, Astray of the Herd,  involving his opinion on 75 topics.  Marketers call this outdoors, lets-do-something personality, an experiential.  It is a very modern concept - previously only the wealthy had the option of choosing this lifestyle. Although he is somewhat low key about it, his book is sufficed with this type of outlook on life.
Topic 3 in Astray of the Herd (on jobs) illustrates this point:

Those two weeks and the usual paid holidays were all I had to look forward to there. The rest of my life was dedicated to work.  Selling my time. Time is the only thing we really poses in life, and no one know how much he as left.  Why can’t people see that?  Life is short. Finite. It ends.  But still, they gladly sell their time, and for what? For money…