J.G. Ballard's High-Rise (Kindle) is  novel of a very focused social collapse with an a high-rise apartment complex at the edge of London.  The novel is obviously highly allegorical in nature, and takes pointed shots at the English upper middle class, and their lifestyle. 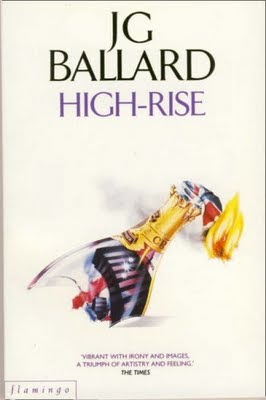 J.G. Ballard was born in Shanghai in 1930.  He, along with his family, was put in a Japanese civilian prison camp during the war, and returned to England in 1946.  He rose to prominence when he began writing for Micheal Morcock's avente garde Science Fiction magazine New Worlds in the mid-1950s.  He is generally considered to be one of the established figures of the 1960s "New Wave" movement. He rose to prominence as a novelist with a destructive cycle of novels, that showed the ruination of the world with the four classic Aristotelian elements Air, Water, Earth, and Fire:  The Wind From Nowhere (1961),the Drowned World (1962), The Burning World (1964), and the Crystal World.  He has never been popular with the hard-science science fiction audience, which may be why he never won any of the field's major awards (Hugo, Nebula).  He has a long history of reversing the normal heroic paradigm, and his hero's often are self-immolating, and often work to further along the disastrous scenarios of his fiction.

On the backside blurb of my copy of Ballard's The Drowned World it comments:

Camping in the abandoned, mouldy Ritz Hotel, the temperature rising, [Dr. Robert] Kerans dreams the strange dream, delving deep into the wells of humanity's remote biological past.  Penetrating man's eternal psyche, Kerans asks whether man must slip back to antediluvian consciousness as the earth returns to its primordial panorama.

The back blurb on High Rise has the following:


...from innocent beginnings it reduces people to murder, incest and above all a passionate lover for chaos.

The high rise is a self contained forty-story apartment building built on abandoned dockland a convenient commute from London.  As the story goes on, additional sister buildings can be seen to be going up across the vast separating parking lots. There are about 2,000 residents, and there is shopping, entertainment, and schooling for the children all in place.  The novel opens:


Later, as he sat on his balcony eating the dog, Dr. Robert Laing reflected on the unusual events that had taken place within his huge apartment building during the previous three months.   Now that everything had returned to normal, he was surprised that there had been no obvious beginning, no point beyond which their lives had moved into clearly more sinister dimension.  With its forty floors and thousand apartments, its supermarket and swimming-pools, bank and junior school - all in effect abandoned in the sky - the high-rise offered more than enough opportunities ofr violence and confrontation....


High-rise was written in 1975.  It is looking at a society that was turning more and more to the gated community, and an isolation of the mid-upper elites within their own society.  Not even anticipating the ability of the internet to allow people to roam far and wide with the most tenuous connections to everyday real tactile world, it anticipates an eventual societal collapse through self-atomization.

A new social type was being created by the apartment building, a cool, unemotional personality impervious to the psychological pressures of high-rise life, with minimal needs for privacy, who thrived like an advanced species of machine in the neutral atmosphere. This was the sort of resident who was content to do nothing but sit in his over-priced apartment, watch television with the sound turned down, and wait for his neighbours to make a mistake...people who were content with their lives in the high-rises who felt no particular objection to an impersonal steel and concrete landscape, no qualms about the invasion of their privacy by government agencies and data-processing organizations and if anything welcomed these invisible intrusions, using them for their own purposes. These people were the first to master a new kind of late twentieth century life. They thrived on the rapid turnover of acquaintances, the lack of involvement with others, and the total self-sufficiency of lives which, needing nothing, were never disappointed...By its very efficiency, the high-rise took over the task of maintaining the social structure that supported them all. For the first time it removed the need to repress every kind of anti-social behaviour, and left them free to explore any deviant or wayward impulses...

The very remote control nature of society.  The very protective cocoon that shields us, will eventually remove the social mechanisms that keep our society intact.

I won't go into the escalation of squabbles that brings about the complete breakdown of culture within the building.  They are somewhat surreal and not that specifically important.   What is very interesting is that the author views the people within the building being drawn to the excitement and chaos once they are exposed to it.  Having lived without it for so long, they have lost their self-control, their immunity to anti-social impulses.

Did I enjoy the novel?  It was interesting, it was entertaining, but it was not the master work one would like to see from such a famous author.  Although there is an attempt to show the slow shift into collapse, and by implication the slow collapse of our own society into collapse, the progression is not particularly compelling.  The novel, written at the tale end of the societal changes of the 1960s has themes that were likely more compelling to that time period.  The not particularly graphic sexual looseness is more a part of the pre-aids era.  The lack of concern about their collapsing outside careers, as the residents become more cocooned in their tower, is pre-1980s.

On to our two descriptive (versus qualitative) ratings:  Realism and Readability: 1 to 7, 4 is the midpoint, and 7 is high.

Realism is easy.  It is set in the modern world, but it is obviously satirical.  The activities are exaggerated to illustrative a trend.  There is some focus on collapsing infrastructure, and running out of food, but not in the nitty gritty survivalist fashion.  The tenants are psychologically chained to their situation, not physically forced into it.  It is a 2.

Readability is literal:  how fast and easy is this book to read.  There is clearly two levels of reality going on here.  The in your face collapse storyline, and the commentary on the situation of the modern world: an older, upper class, Lord of the Flies.  Much like Lord of the Flies, you can almost ignore the heavy handed symbolism and read it as a straight storyline.  The pacing is uneven, and while it is not a long book, I found it to be a bit plodding:  a literary 2.
Posted by russell1200 at 5:00 AM

Read this while on a training stint in Grafenwohr with the Coldstream Guards as a driver for the American liason. Must have been winter 1978/79.

It really does make a lot more sense when you are hanging around a bunch of Brits. I don't think that Americans can really appreciate the vibe that Mr. Ballard is trying to convey.

At the time, it seemed spot on.

Maybe we should get Demetrius to Give it a gander and get his take on the book.

I will concede to your expertise. Although, I vaguely recall that while it has its fans, it doesn't seem to be his most raved about work.

Oddly enough it reminds me a little of the Stepford Wives theme.