Collapse of Empires: The Maya

There is more evidence in as to what caused the collapse of the Classical Mayan Empire.
Tainter would say that they became to complex and were no longer able to adapt to increased challenges.  Diamond would say that they slowly degraded their environment until a modest reversal caused the whole house of cards to collapse.
Both of their theories are loose enough that they can claim that the evidence that a period of extended drought coincided with their collapse.  But the problem with such loose theories is that they have little real predictive value. How complex is too complex, and how much degradation is needed?
An ancient civilization's wet ascent, dry demise
Bruce Bower, Science News, 8 November 2012 (hat tip: Big Picture)

His team analyzed a stalagmite that grew in Yok Balum Cave from 40 B.C. to 2006 A.D. Rainfall estimates for each year of rock formation were derived from measurements of oxygen that accumulated in the stalagmite as runoff from rains entered the cave.

Yok Balum lies near a half-dozen major Classic Maya sites. The scientists compared the climate data with historical records, carved on stone monuments at these sites, of Maya warfare and political events.

Researchers have argued for decades about whether the Classic Maya collapse stemmed more from droughts or from warfare and weakened political systems. Kennett says the new evidence is consistent with climate changes interacting with social forces to pull Classic Maya civilization in different directions.


Population increases and the expansion of Classic Maya polities were favored by anomalously high rainfall and increased agricultural productivity between 440 and 660 C.E. High-density Maya populations were increasingly susceptible to the agricultural consequences of climate drying. We propose that a two-stage collapse commenced with the 660 C.E. drying trend. It triggered the balkanization of polities, increased warfare, and abetted overall sociopolitical destabilization. Political disintegration in the Petexbatun region foreshadows two multi-decadal dry intervals that further reduced agricultural yields and caused more widespread political disintegration between 800 and 900 C.E. This was followed by a second stage of more gradual population decline and then punctuated population reductions during the most extreme dry interval in the YOK-I record between 1020 and 1100 C.E.


It seems to my mind that the biggest problem is that people expand to the limit of the calorie supply.  It doesn't really matter how advanced, or complex the society is, be it the Homeric Greeks, the Romans, or the when the weather turns against them, they die off.  Even hunter gatherers had these problems.  They are just not particularly well recorded because most non-agriculturalists did not leave enough permanent remains to make their collapse very clear cut.
What makes the big collapse impressive, is the height from which the fall takes place. In the case o the Maya, all the way from the top of a very tall Pyramid. 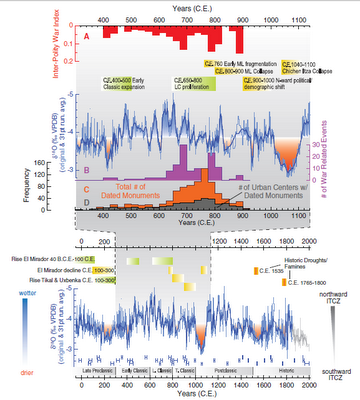 i agree with the simplicity of your conclusion.

fact is, humans almost never save for a rainy day (or in some cases - a non-rainy day)

we expand to the limit and them some, without a buffer, almost all civilizations wither.

i think hunter- gatherers adapted a bit better as they were in tune with cycles to begin with... agriculture only made us worse off in times of crisis.

Farming communities could sometimes safe up enough for a couple years of drought.

There really is no evidence at all that hunter-gatherers were better attunded to their cycles. There is rather strong evidence of them using wasteful massacre techniques in both hunting and fishing that left large amounts of game rotting on the ground. It is not a complete accident that everywhere humans introduced themselves, almost all the big game animals disappeared. Certainly a lot of it was climate change, but the big animals never recovered.

The hunter gatherers advantage is that their numbers were lower to begin with.

A drought could hurt their food supply, but with less of a build up in population, they had less distance to fall. The swing in food production on a farming community would be much larger.