L.C. Fiore's Green Gospel is a dystopia of the here and now with vague foreshadowing of some sort of environmental apocalypse presumed for the future.  Taking place in Oregon and Florida during a time period that brackets the 911 Twin Towers destruction it centers around the violence of the state, and through home grown  eco terrorism, the violence of individuals. 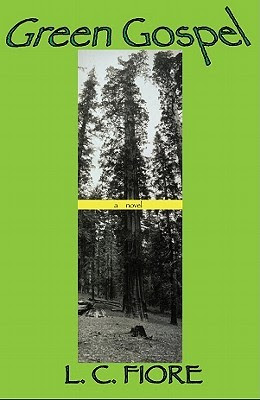 L.C. Fiore has published in a number of short format venues.  Green Gospel, his first novel, was winner of the Eric Hoffer First Horizon Award for superior work by debut author.  The author lives in Durham, North Carolina, with his wife.
The story takes the point of view of a number of disparate folk.  Most of them are the various inhabitants of balmy village on the coast of Florida.  The type of small town whose population multiplies every winter as the snowbirds come south to avoid the arctic climes.  The main character however is Eddie, a young waifish college age gal who has just escaped from the law on the West Coast.  Although the details are not made clear until the middle portion of the book, it is obvious she has some sort of connection to a group of eco-terrorists.  She staggers into town in rather poor shape.
In the flash backs we get a better sense of what her group iwa up to.  That the author has sympathy for their cause is made obvious from the way that none of the groups targets are portrayed with any sympathy.  In the case of Eddie, you have wealthy college student of little accomplishments, messing around with a number of peoples livelihood or possessions, and the general telling implies the justice of her cause.
Eddie herself is a rather cold fish.  She gets involved with the plight of all sorts of injured birds, or hungry cats, but generally acts rather aloof, or with great disdain toward the people she associates with.  There is  a little back story that appears to be an attempt at explaining her attitude.  That it is not particularly successful is, I am guessing, because it is somewhat the authors own persona coming through the pages.  In any case, while Eddie doesn't particularly try to hurt people directly, you wouldn't want to get in her way either.
One of the primary themes of the book is how societies maintain the status quo.  Even people working to take corrective actions, are often only willing to work within the confines of society.  Eddith, as the star of the "green faith" is contrasted with the less extreme lovers of natures,  true believers of the traditional Pentacostal Evangelical faith, and soldiers (through Gulf War flash backs) and police defending the current order.  There is a constant theme of how the context of violence greatly changes or perceptions of its nature.
In the end, while the novel does a fairly good job of poking holes at the myths we surround ourselves with, although the “Green Gospel” doesn’t appear to be so much an answer, as a nihilistic reaction.  As Eddie notes:

She considers the last few years wasted. She no longer believes in goodness.   The churchgoers  she's met take for granted the inherent goodness of very living thing.  She believes this is a fatal weakness (p. 102).

Some nights she lay in bed thinking about all that was wrong witht he world, the starvation, the irresposible  raping of the land, and she wept.  She wept at the devestation and pain and she wept at ther own helplessness in the vase of it all. She hadn;t known she could feel such depth of emotion for anything (p130).

In the end, only destruction is the really successful path.  The Reverend Dancer is more of a building sort, and has his own way of being environmentally proactive.  But he is such an oddly twisted soul, that it does not stand out as a particularly encouraging example. Further his efforts are literally bankrupt, and he must commit to Edie's methods to save his own efforts.
The book is an interesting one.  Mostly it is a relatively light exploration of the philosophies of power and subserviance wrapped up in an extended set of character studies. There are some highlights with some interesting methodologies toward mayhem, and it does wrap up with a nice crecendoing conclusion.  The lack of quotation marks is annoying, and some of the characters are maybe not as believable as others. But the author certainly cannot be faulted for putting forth an effort to flesh out some rather complex folk.  For those who have a taste for modern literary fiction, I would very much recommend it.  It reminds me a little of the moodiness Robert Edric's of Salvage.
We move on to our descriptive categories: Realism and Readability: 1 to 7 with 4 at the midpoint and 7 high.
Realism is pretty straightforward.  It is a modern day dystopia.  Or put another way, a pessimists view of the real world.  Eddie is possibly a little overly successful for her stated experience level, but it is a story after all.  It is a 7.
Readability is not the literary quality, but literally "how easy is it to read and understand."  The category was almost designed for the dystopian settings which run the gamete from the plain and simple La jetée ciné-roman picture book, to the very confusing noir Tobacco-Stained Mountain Goat.  In this case we have something in between.  It is not exactly a fast paced page turner, and it does have a certain amount of symbolic content (Eddie has the arch angel at the top of the Christmas Pageant Live Tree).  But the story moves along with most of the symbolism being somewhat obvious and can be ignored as you wish.  It is a literary 4.
Posted by russell1200 at 5:00 AM