Maybe some of the suspicion about the shale gas boom comes from the fact that many of its main architects act more like real estate speculators than energy providers.

Of course the eco-opponents of the whole idea will grasp and imagined straw in their opposition, but there is a certain general problem with the new fossil fuel prosperity.


Briefly, Food & Water Watch finds that (hat tip):
Along similar lines, there is a new book coming out:  Cold, Hungry and in the Dark

From its Amazon description:

Conventional wisdom has North America entering a new era of energy abundance thanks to shale gas. But has industry been honest? Cold, Hungry and in the Dark argues that declining productivity combined with increasing demand will trigger a crisis that will cause prices to skyrocket, damage the economy, and have a profound impact on the lives of nearly every North American.

Relying on faulty science, bought-and-paid-for-white papers masquerading as independent research and "industry consultants," the "shale promoters" have vastly overstated the viable supply of shale gas resources for their own financial gain. This startling exposé, written by an industry insider, suggests that the stakes involved in the Enron scandal might seem like lunch money in comparison to the bursting of the natural gas bubble. Exhaustively researched and rigorously documented, Cold, Hungry and in the Dark: 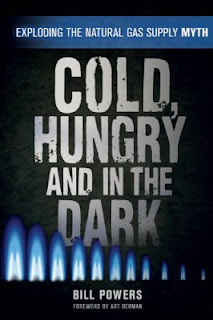 Aw crap, and I have gas logs and a gas stove.

Jane: Gas in most locals is your best bet for intermediate level disasters- thus the popularity of natural gas fueled whole house generators. Of course in the country were gas supplies are not available a lot of people use propane.

Let me tell you, this is no fictional-wealth speculative bubble like real estate, dotcom, or Enron, this is a genuine-wealth boom like the gold rush of 1849. I know, I'm in the smack dab in the middle of the Marcellus region, it's hard to drive far in any direction without seeing a well. And the people getting rich are the ones drilling them.

"100 years supply" is suspect from the beginning, just like a handwritten W2 that shows exactly "$40000" with "$10000" withholding. A genuine estimate rarely comes out to a round number like that.

If you look at the places that genuinely try to estimate supplies, you'll find that when they come up with numbers near 100 years, that not only assumes current demand, but also uses supply available "at any price". Of course as the price goes up, the demand goes down, so it may very well be 100 years before they shut down the last remaining gas well, pumping out a product far, far too expensive to burn.

John: Of course its a speculative bubble, you could almost name it the "Chesapeake Bubble". At the point that you bring so much supply online that you drive the price down to $0, almost to the point where you may have to give it away, you have something rather bubblelike going on. Since Chesapeake has changed management, possibly that part of the silliness will calm down.

The 100-year U.S. supply was founded on forward projections by accountant types.

When the U.S. geologists took a look at a few months ago they came up with a 30-40 year supply. It made news for about a week,and then everyone was back to the 100-years theme. 30-40 years drops further with increased demand of course.

Note that when the geologists weighed in the accountants who made the original 100-yard estimate had no problem with the new number.