Larry Kollar's White Pickup (smashwords) is an apocalypse-in-progress set in a gated residential development on the outskirts of Atlanta, Georgia.  In this first part of a continuing series, the white pickups are not entirely explained, but they are clearly part of greater scheme of possibly extraterrestrial, possibly metaphysical threat to all of society.
From the blurb:

At summer’s end, mysterious white pickup trucks take to the roads and compel nearly everyone to “drive off.” Some of those who remain gather in a suburban Atlanta subdivision, and struggle to cope with a world whose infrastructure is rapidly crumbling. 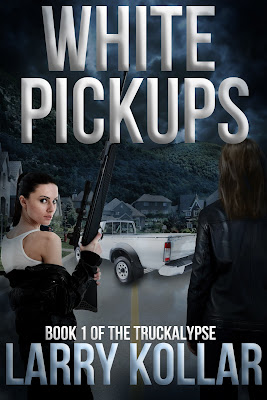 Larry Kollar, lives in the suburbs north of Atlanta, Georgia, is a technical writer who has gone public with his fantastical, and science fiction writings.  He has had a variety of short works published, but this is his first full length novel.   He has a blog-published longer militia-collapse piece online. I recently reviewed the novel, Enfold Me, also by a technical writer gone fiction-rogue, and noticed that the years of writing seem to make these first efforts less clumsy and relatively polished compared to the usual self-published efforts.
The story begins with people getting in, and driving off in the mysterious white pickup trucks.  It is all relatively fast, functionally, and a little coolly clinical.  There is some of the looting and mayhem of the typical fast-collapse novel, but all of this action occurs en cameo - briefly told in passing.  There is some discussion that it appears to be more independent minded folks that are best able to resist the siren call of the pickups.  Combined with the surreal nature of the disappearances, that may go a long way toward explaining the rather tempered grief at the loss of so many people.  Of course, the first thing that all the featured independent minded people do is band together to form a rather eclectic urban version of an ad hoc survivalist group.  As one would expect in the suburbs of Atlanta, there are a variety of skin tones, a few gays, and a general hodge podge of the mostly well off.

Initially the only children are teenagers.  But as time goes on some left behind youngsters at a local cinema (good drop off parenting there) and adopt them into the group.  Various couples pair up and they settle into a semi-communal group. They are an odd mix of brilliant endeavor, hooking up methane generator from their waste lines, and ad hoc half preparedness. Even though some of the people joining the group have run into bad guys on day one, and wild dogs latter, outside of a little target practise, they make very little real effort at defensive preparations until they get attacked.  In a world full of left behind firearms, only a few of them have long arms, and no attempt at even a simple strung wire fence to slow up, or at least funnel, any rush on their little enclave is made.  They are more thorough about the dogs, but only after a surprise in-your-face encounter.

Fortunately for them, the bad guys are, probably somewhat realistically, inept tacticians.  Finding them (easily) by following their smoke trail.  The bad guys march right up the main road in daylight so that they are seen approaching, and then clump together in their attack so that the wildly firing defenders have a target rich environment even though there are only a handful of bad guys.

Similar strange thinking occurs off and on throughout the book.  One item I particularly recall is their semi-serious efforts to see if they can destroy some trucks without any concerns what might happen if their is passengers of some sort inside.  I am not saying that it is not a sacrifice you might make, the trucks are fairly inimical, but it doesn't even occur to them- Even after 99.5% of the population has climbed into them.

On the positive side, as noted above, it is a very clever group.  Although you aren't bored with the blow by blow details (that's what the Internet is for) they have far more constructive ideas as to how to make a little post-collapse settlement work than most more dedicated survivalist fiction.  It is an empty world, so they have the resources, and they have sufficient people.  You don't get all to that "How should we modify the constitution?" discussions because...well let's face it why on earth would a tiny band of survivalists be worrying about how to modify the constitution.  Everyone pitches in because that is what happens in small groups.

It is a rather light hearted affair: a survivalist tale from a more modern liberal point of view. They do gardening. They have projects.  But they still take time off from their classes to have skate boarding lessons for the youngsters.  That's right, it is post apocalyptic America, and the kids want to learn skate boarding.  It makes a certain amount of sense, but this band of survivors don't take themselves nearly as seriously as most.  As with the much more serious in tone, Dark Road, that we reviewed recently, there is a little bit too much jaw-boning that doesn't seem to entirely lead anywhere. But within the much looser structure of this story, and a much smaller cast of characters, it does not weigh down the story nearly as much.

There are a few people that come along who have religious convictions, including a relatively open minded pastor, but the surreal nature of the disaster keeps some of the metaphysical speculations in check.  Whether the pickup trucks are alien, or metaphysical in nature, or both, is so completely unclear as to leave those types of issues unresolved. Based on the hints on the upcoming novel, those issues are to be explored later.
Heavily emphasised in some of the promotional blurbs, there is a plot thread that sounds very much like the "legend in the making" trope that you sometimes see in post-apocalyptic tales (Maleville, American Apocalypse, Earth Abides...).  It takes up a little space, and is not particularly convincing.  It would help if the "hero" in the making was a little less self absorbed, and  little more obviously competent.  Keeping your video games going, and taking time out to give skate board lessons to the kids, is not the normal activities of a driven leader who keeps things together in times of despair;  and the groups activities suffer for it.

Did I enjoy it?  Yes.  It was about as light hearted as a life and death, end of the world, situation, can be.  The low pressure narrative winds its way through the story in a rather leisurely pace.  This leisurely pace keeps the story from getting far with resolving the white pickup truck issue, which does leave you with the usual multi-part story dilemma.  While I am interested in knowing what is intended with this part of the story line, with the massive number of novels to read out there, the multi-part projects are very much at risk of loosing readership at each step along the way.
For our descriptive (versus qualitative) ratings:  1 to 7;  4 is the midpoint and 7 is high.
Realism is difficult.  I don't generally include the likelihood of the collapse scenario itself because that tends to get into very core arguments about the philosophy of reality.  It may not be likely that a meteor would knock the moon of course, or that a mediocre soldier would become leader of Germany and start a genocidal world war, but if you live in the improbable world where it happens:  well than it happens.  But the white pickups have a continuing effect on the story.  The unresolved nature of their threat, also keeps them from being a stand in for the more typical pandemic plague.   There are issues of supply, and group cohesion.  There are threats, and a lack of preparation does seem to slow up their efforts at times.  They huddle together, but there huddling is that of modern people used to their own space, and it makes supply issues (wood/fuel) a larger issue than need be.  It is a prepper novel with a very strange collapse scenario:  a 5.

Readability is very straightforward.  It is not a literary work, but the language is effective and direct.  The symbolism is generally portrayed in a rather straightforward manner, and if not entirely resolved, that is because it is a multi-part story.  A little too much chatting and navel gazing to be called a page turner.   Modern people are very in touch with the "inner" selves, and aren't likely to go off looting without thinking through their group motivations.  It is a 6.
Posted by russell1200 at 5:00 AM