Andrez Bergen's Tobacco-Stained Mountain Goat is a slow apocalypse-in-progress, set in Melbourne Australia in the somewhat near future. 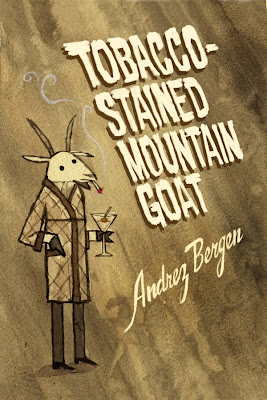 Australian Andrez Bergen has worked in a variety of musical and visual art fields -some of which I am not sure I understand - and as a journalist.  This is his first novel.
This novel takes a little while to get going. In my case, someone was cleaning up and moved it on me, and by the time I found it I had already started something else. So the old goat lay there gathering dust for a while. The fate of interrupted, slow-moving odd novels. But fickle fate can work in both directions, and after having read a number of monstrously long apocalyptic works, I was looking for something shorter. And it can’t get much shorter than a half-read short book.
Tobacco-stained Mountain Goat is a mashup a Soylent Green like post-apocalyptic Melbourne Australia, and noir detective movies: Sam Spade, Philip Marlow.   It's always raining, and the rain is toxic, its always gloomy, and everyone in a postion of power is a talking-head or corrupt - elements of Blade Runner- but less upbeat.
It is written from the point of view of Floyd Maquina looking back on events.  Floyd is a Seeker, a Seeker of Deviants who need to be rounded up.  The presumption is that once they are rounded up they are unlikely to see the light of day again.  These assignments are referred to as "Activities".  He has a doll (Laurel - a co-Seeker), an occasional partner-sidekick (another co-worker - Hank), and he has a lot of bad dreams.
As alluded to above, the book takes a little while to get going, and it is very confusing at times.  You have both dream sequences and dream-like test sequences interspersed with reality.  It gets to be a little much at times.  About half-way through the book, it begins to jell together enough that it begins to make sense.
A lot of apocalypse-in-progress novels end rather weakly.  I suspect it is because the author comes up with a really cool idea for a setting, and comes up with some interesting action to go with the setting, but than has a hard time bringing it all to a close.  That so many of them end up as  cozies I think is simply because the author is stumped for an ending, and so chooses: "They lived happily ever after."
Goat is very much the opposite.  The setting is rather derivative.  Derivative of about half a dozen genre settings maybe, but still derivative.  Although some elements of the ending are slightly telegraphed, the ending really does wrap up a lot of loose threads.  If it is a happy ending (if), it is the type of happy ending that is highly appropriate to a noir setting.
I found it enjoyable.  With the glossary and Encyclopedia in the back you can learn a little bit about the detective noir genre.  The apocalypse portions of the story are a bit contrived to make the setting fit the genre, and it works.  But of course that does not make it the predictive sort of apocalyptic novel.
For our descriptive (versus qualitative) rating (1 to 7 with 7 being high) of its grittiness  (realism) and readability, I will start by saying that its grittiness is a 2.  Note that our grittiness is not exactly the same as what a fan of the noir genre would call grittiness.  It is plenty gritty in that way.  In fact I would almost give it a one, except for that element.
Readability is hard.  If you are a fan of the film noir/private detective genre it is probably in the range of a 6 or 7.  For the rest of us mere mortals it is a 2.  Two different types of dream sequences, a lot of allusions to obscure genre movies, and a certain amount of symbolism (the goat) to further confuse the issue it is rather tough going until the second-half to two-thirds of the novel.  It is not James Joyce stream of consciousness retelling the Iliad, and it is relatively short, so we will not put it at the bottom.
Posted by russell1200 at 5:00 AM