Jim Crace's The Pesthouse is set in a post-apocalyptic Eastern United States possibly around 500 years into the future.  Far enough into the future that any memories of the old United States (generally referred to as America) are only the vaguest memory of people once living in very large buildings and using metal machines. 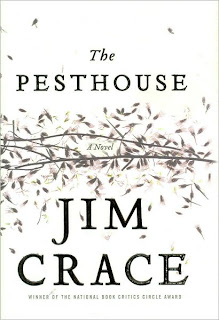 Jim Crace is well known mainstream novelist.  When he makes a move toward the post-apocalyptic, people take notice.


Long the province of genre entertainments—science fiction, dystopian fantasy, post-apocalyptic movies—the future has been boldly explored in recent years by such writers as P. D. James (“The Children of Men”), John Updike (“Toward the End of Time”), Margaret Atwood (“The Handmaid’s Tale,” “Oryx and Crake”), Doris Lessing (“Mara and Dann”), and Cormac McCarthy (“The Road”). Now comes a grim prophetic fable by the much admired British writer Jim Crace, who in previous novels—“The Gift of Stones,” set at the dawn of the Bronze Age; “Quarantine,” in the time of Christ—has shown a flair for imaginatively evoking the past.

It is an odd novel.  It has more of the feel of a reverse direction wagon trail - cowboys and indians - story:  the trail leading to the East Coast. The not too imposing bad men on the trail would not last long with the Comanche, but with the oddly incautious settlers in our story, they are dangerous enough.
The cause of the disaster is unclear.  It appears to have been a combination of pestilence, with peak oil.  I say the peak oil because the ocean going vehicles are using sail.  There is a drought in the land at the moment, but it is not entirely clear that that has been an ongoing problem, or more recent.
Given the archaic sounding customs, and the simplistic world view of the inhabitants (not to be confused with our own more enlightened modern views) , and the fact that people have an almost messianic desire to escape their current situation and travel across the Atlantic - an Atlantic Ocean that most have only the vaguest concept of- the author seems to positing a slow devolution from our current status of living high off the hog.
What does the book do well?  The book does a fairly good job of illustrating the problems of living in a society with very low margins for error.  The relative wealth of the net makers and pot menders does not survive one unfortunate encounter on the road.  It also does a good job of illustrating the difficulty of making choices with very limited information.  As I commented in a (partial) review of Doris Lessing's The Memoirs of a Survivor in a much more modern collapse setting:

All over the city were these groups of people, moving from one place to another , pub to tea house to bar to outside the shops that still sold televisions. These groups were like an additional organ burgeoning on the official organs of news; all the time, new groups or couples or individuals added themselves to a scene, stood listening, mingling, offering what they themselves had heard-news having become a sort of currency-giving, in exchange for rumour and gossip, gossip, and rumour. … Of course it was often inaccurate. But then all news is inaccurate. What people were trying to do, in their continual moving about and around, nosing out news, taking in information, was to isolate residues of truth in rumour, for there was nearly always that….

What goes for Ms. Lessing's modern London goes doubly so, for the much further along the collapse route post-apocalyptic American in this story.
The collapse is past, so the book does not fit the basic plot-setting requirement for a cozy.  The writing is fairly fluid, if a little slow in actual activity at times.  Much of what is observed seems to be more along the line of "Gee, isn't the collapsed future a strange place."   There is a fair amount of not very interesting navel gazing.

There is a fair amount of discussion about hunger, and a little bit of effective advice on how to beg for food from strangers (people in tidy houses can be shamed into helping, people in untidy houses don't care), and an allusion to the fact that horses, if they know your scent, are capable of tracking you (see tab on hunting).  And finally, there is the novel (to me) idea of netting birds as a food collecting method.

Using our metrics for readability, and for grittiness/realism, n our scale of 1 to 7 (7 being highest), I will say that it is a just above average 5 for readability.  It is short, and while it is not action packed, the scenery moves along.  For grittiness/reality?  We are talking about a world where people want to migrate to a location where they have no backwards communication from:  that is actually historically a pretty rare thing.  There are almost always a few trail blazers before the group sets off.  The level of technological forgetfulness seems more like a plot device than particularly well thought out.  The bad guys, as noted above, and just about everyone else, are tad bid incompetent about even going about their basic business.  The heroine has never left her immediate village, but is preternaturally competent at all sorts of daring activities.  Her young consort is, to an outrageously PC-level, not so much so.  It is not completely devoid of survival issues, but they are very muted. By the end of the story the survival problems are pretty muted.  I will say that it is a 3.
There some people who love this book: maybe they like the "strong" heroine. I did not dislike it, but I am underwhelmed.  The end concludes with a bit of bland sermonizing.   Shrug.
Posted by russell1200 at 5:00 AM