John Barnes’ Directive 51 is the first in a series  apocalypse-in progress novels of which Daybreak Zero follows.  The last in the series, The Last President, is scheduled for 2012:  hopefully prior to the Mayan Calender due date. 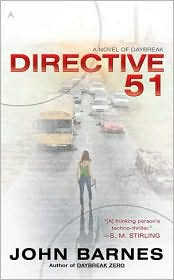 An odd, uneven sort of book.  It takes its name from (one of ) the Presidential Directives on the plans that in the event of nuclear Armageddon, or other type of disaster wipe out so much of the high government, the Presidential succession comes into question.   The various twists and turns that could occur in a world run amok are one of the main themes of the book.  While the details of succession have an element of interest, the actual playing out of the variety of disputes is not very compelling.  A series of unsympathetic people take control at times.
The disaster that occurs falls into the category of “other”.   Although there are some elements of this portion of the plot that are a little iffy, it is one of the stronger portions of the novel.  The book begins with a series of directed attacks against the various world governments in a sort of open source guerilla warfare gone wrong.  The planning and plotting of these attacks is fairly interesting.
The follow on portion of the story is the collapse story.  The collapse hais brought about by a variety of methods, but it is a very fast one.  Nanotechnology replaces the EMP-strike to get the job done quickly.  Frighteningly, I find elements of the nanotechnology scenario more plausible and effectively (in a near future sort of way) than your typical EMP-novel fare.

The actual collapse tale is not particularly well played out.  It is all very fuzzy, and has a high element of coziness to it.  The failure of this portion of the book seems, in part, to stem from a desire to keep enough of the United States going that there is a Directive 51 worth worrying about.  Even with all the chaos, they seem to have no problem keeping the military fed.  Their equipment may nano-melt, but they can be fed.
There are a couple of gun battles.  The first one in the collapsing suburb of Chevy Chase, Maryland almost gets the reader thinking we are going to see the start of an interesting urban Mad Max scenario, but the thread winds itself down fairly quickly.


Inter-sprinkled within the novel are a few small love stories.  These are not particularly exciting.  There is a reasonable effort to affect some personality to the various characters in the book, but the endless side stories slow up the reasonable efforts at a plot driven novel.  If there were a few less characters to keep up with it might have worked, but….
Grittiness is low.  Not too surprising for a speculative science fiction.  Only a few of the more survival orientated scenes could be viewed as having much connection with mundane reality, and they often have an odd hands-off viewed at a distance feel to them.  I would place it below the mid-point at a 3 (1 to 7 with 7 being “high” or very real).
Readability is difficult to access.  It is how “fun” the book is to read.  How accessible.  The language is not particularly difficult. But it is long book, and there are a lot of characters –often not doing a whole lot, truthfully it gets a little dull at times. I am again put it below the mid-point at a three.  Unless you really like this type of book, it is going to be a little bit of a slog at times.
What is my net assessment.  Trimmed down and with a slight shift in focus, the book might have been a classic.  It comes very close to building into a Lucifer’s Hammer scenario, except with some of the participants being witness to the collapse for the Presidential /Executive Branch point of view.  The portion where the disaffected protesters are going about their nano-sabotage is superlative.  But the collapse itself and the arguments over succession are drawn out way too long.  You spend huge portions of the book worrying about one government bad actor who is going to die in a couple of weeks anyway.  The entire machinations of the "Vice-Presidential in Peril"  plot line turn out to be a a bit plot gimmickry to push further into Presidential succession issues.   The scenario’s twists and turns are so odd that I don’t feel the lessons learned were worth the distortions in the other themes of the book.  So while it had the potential to be a Lucifer's Hammer, it was not, and in net failed even to be particularly entertaining.
Posted by russell1200 at 5:00 AM