Retrieved from the Future: A Review

John Symour's  Retrieved from the Future I have seen billed as the first peak oil novel: to my mind more precisely, the first apocalypse-in-progress peak oil novel.  Published in 1996, it is set primarily in a cul de sac farming area along the coast of East Anglia some time in the first decade of so of the 21st century.. 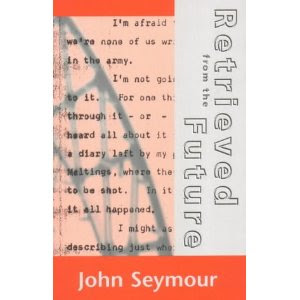 s
John Seymour (12 June 1914 – 14 September 2004) was key figure in the British post-war self sufficiency movemen and a prolific authort. In his twenties he move to Africa and made a living in a variety of fashions including  living with  Bushmen.  During the Second World War he served in East AFtica as an invatruy officer, first in Ethiopia ant then in Burma.  After the war he made his living on a Thames sailing barge.  Some of his experience on the barge are used within this book.  He married a Dutch artist, and as their children grew older decided to settle down on what today might be referred to as a homesteading farm in Wales and later Irleand.  He was living with his daughters family on his old farm at the time of his death.
John Seymour was not a regular writer of fiction:
The post-oil novel: a celebration!
Frank Kaminski, Energy Bulletin 11 May 2008

The inspiration for Seymour’s foray into speculative realms was his conviction that our modern “Age of Plunder,” as he called it, was inevitably coming to an end. Seymour saw the Age of Plunder as a natural result of the Age of Reason, “the Age in which humankind decided that it knew better than God.” In a getting-and-spending spree of unprecedented greed and ruthlessness, humans had exhausted the forests, seas, soil, air, and (of course) the cheap, easy oil. This epoch of plunder was doomed because the world system had grown too large and unwieldy to manage, and because there was little left to plunder. It would be followed by either an Age of Chaos or an Age of Healing. We ordinary citizens could help effect an Age of Healing through our everyday choices, from refusing to work for the plunderers or shop in their supermarkets, to working for a decentralist economy, to participating in local politics and buying or growing our food locally. (Source noted:  John Seymour, “The Age of Healing.” Resurgence 173 (1995):10-11)

The novel starts off in a little tiny corner of coastal East Anglia - the portion of England that is northeast of London and across the narrow seas from Belgium and the Netherlands rather than France.  It is written as a set of short recollections of what happened when it all fell apart.
After a decade of slow oil induced decline, there is a ferociously cold winter and revolution in Mexico and the Middle East have caused already tight oil supplies to begin drying up.  Without the fossil fuels to make fertilizer, run machinery, or transport to market the United States begins to stumble first, and with it goes much of the worlds excess food supplies.  In Britain there are a variety of strikes and disruptions.  A combination of protests, sabotage, and accidents put an end to hopes for an nuclear energy age.   The Prime Minister gives a speech of encouragement telling everyone to stay home while it all gets sorted out (retrospectively reminiscent of G.W. Bush's speech post 9-11 speech telling everyone to shop).  It is the last anyone hears from her as the final collapse sets in.
At the start of the book it seems as if we are on a pace to begin a cozy little adventure of small self sustaining community working together to start a new world while fighting off some bandits.  A blander version of Maleville possibly.
But than the Army shows up. and it is a rather rough uncivilized military.   They demobilize the local militia that had been keeping order.  The local attempts to divide up a small portion of the available local land to grow gardens is plowed under at the behest of the manager of the local agri-corp manager.   They begin rescuing unfortunate young girls who would otherwise go hungry and let them stay with the troops.
Eventually a little revolution starts.  It is a fun enough little revolution.  The guerrillas have a Carl Gustav 54 mm recoilless rocket launcher to blow up all sorts of fun stuff.  The rebels have a huge advantage in knowing the local terrain intimately.  However, as there is only half-a-dozen of them, the feel is a bit Red Dawn - like at times.

The book brings up a number of issues that are worth noting.  First, that even though oil is still coming into Britain,, eventually the refineries begin shutting down because they cannot feed there workers.  In many areas, there is complete chaos and anarchy.  In other areas, a variety of military units take over and keep the peace.  As martial law is declared, and then the civil government collapses, they become answerable to none.  They do help keep some stability in some areas.  And they have access to whatever limited fuel reserves are available, but in the long run there fire power is used as much to hinder progress as to help it.  Finally, much like with Malevil, the rural folk are extremely suspicious of the urban folk, and view their efforts to stabilize the situation and keep people alive as attempts to turn them back into serfs.  As the book is written, they are more-or-less correct in their suspicious.

The book is entertaining.  The action scenes are somewhat stylized and eccentric at times. A Carl Gustav is a dangerous weapon, but it is very unclear why their opponents seem to be so constantly annihilated by such small forces. The effectiveness and speed at which weapons act is, as is typical, too great. The sailing barge scenes early on are very good. The view of a collapse from a maritime captains perspective is unique.  It is an extreme cozy.  Based on the quote above, it is obvious that the author is very much in the Kunstler School of wanting to return to a quaint 19th century world.  As I have noted before, cozies tend to make fun reads: alls well that ends well.

For our descriptive (versus qualitative) ratings (1 to 7 with 7 being high) we will start with grittiness/realism.  It is not an easy call.  There is a certain amount of day-to-day reality, with some difficult decisions faced, but most of the trouble is generated by the evil corporate agribusiness and the military.    It is real, it is a dated version of our contemporary world, so I am going to say that it is an above average 5.

It's readability is very high.  It moves along very quickly. The character perspectives chosen are interesting ones, and they are generally a likable bunch.   In my view it is a 7.