Vivi Andrew's Reawakening Eden is a post-apocalyptic romance novel.  Really.  Up until very recently I had no idea that such items existed.  To me it seems more of a novella, and is priced as such, but apparently romance novels are generally shorter in length than many other genre fictions.  They are about half the length of typical science fiction novel.  I have never read a romance novel, so I have no idea if its tone is typical of the genre.  It is not quite as sappy as I expected it to be, but some of the stereotypes were certainly there: the chiseled, strong silent type hero, etc. 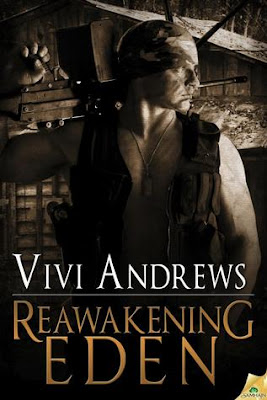 Vivi Andrews is a prolific author with a variety of works in the works. She was born and raised in Alaska, but travels around a lot, and likes varies outdoors activities and traveling.  She has an obvious conservative-libertarian bent to her philosophy: confirmed when I saw Atlas Shrugged as one of the recommended books at her website.
What types of plot lines do romantic apocalypse in progress thrillers have?  I will defer to a portion of an interview Ms. Andrews gave:
Interview & Giveaway with Vivi Andrews
MinnChica, The Book Pushers, 23 November 2011

The Book Pushers: Tell us a little bit about Reawakening Eden.

Viva: Reawakening Eden is my first post-apocalyptic romance. After a massive epidemic wipes out most of the world’s population, librarian Eden Fairfax goes into survival mode, taking care of two orphaned kids and navigating the strange remnants of society. Just when things are going to hell in a handbasket, she meets studly former-soldier Connor Reed. He may look like an action hero, but he just wants to be left alone to enjoy the end of the world in peace – but you can’t always get what you want. (And I’m gonna stop right there before I launch into a Stones song.)

As we have noted before, the convenient fast pandemic is the best way to get all of those people out of the way so that you can get to the us-in-a-lonely-world action.  Books with a grittier intent than Ms. Andrews use it effectively so I cannot fault her.
The description in part undersells the novel.  The beginning of the novel is actually a pretty good set up of for a standard on-the-road survival story.  Young lady, with her two kids, trying to make it south to survive the coming winter.  The author actually has a reasonable clue about what she is talking about and has either read up on some prepper preps, or done a reasonably good job of intuiting.  The gasoline seems to be lasting a little too long, but at least she knows that the batteries are likely to go.
The flu epidemic is past, and the world is in a bit of a sorting out period.  The pandemic came in two waves, and the second wave came so quickly that only a tiny portion of the population (less than 10% ) , and almost no children, are left alive.  This means that while comfort, and law-and-order issues are relevant, basic survival supplies are not.  There are still a lot of canned goods sitting on the shelves of the depopulated cities and towns.
The arrival of the male hero figure signals the end of the setup period.  In a world where there may be no tomorrow (fear of the third wave) the hero and heroine, waste no time in engaging each others interest.  The love scenes are slightly more steamy than your typical spy, or adventure novel encounter- but not grossly so.  They seem like they are having fun anyhow.
Well then heroine, gets in trouble.  Hero rescues heroine with no real resistance offered because he is so stunningly....camo garbed.  It's ex-Army Ranger against ex-Microsoft middle management.  Scary camo works.
So when I say that I liked what I read, it is to be understood that I like it in the way that you would like the first three chapters of a really good longer novel that was never finished.  The Kindle pricing was about equal to three chapters of a book, so I cannot say I did not get my money's worth.  But I am a little disappointed.  In looking at a review from someone (Night Owl Reviews) who liked the book, but is more familiar with the genre, she does not comment on this abrupt ending, so possibly that is just the way the genre works.
For our descriptive (not qualitative) ratings.  How realistic, how gritty was it?  The overly deadly pandemic does not count, and it does have a major impact on how a survival scenario plays out.  The first part of the book was written from an immediate "can we survive" point of view.  Having a mother worrying about two children, and the effect on them was a nice change from some of the more shoot-em-up scenarios.  However, at the point the hero shows up (or doesn't - remember that camo) the realness starts falling apart.  The bad guys know he exists, yet set no guard, and take no precations.  Oh well.  On a scale of 1 to 7 (7 being high), I will put it at the mid-point of 4.  First half a sedate 5 or 6, the second half a terse 2 or 3.
For readibilty, it is easily a 7.  The romance genre has been a popular genre for a long time.  It has had plenty of tme to develop authors who can put words toghether well.  With the exception of the fast forward ending the writing is very good.  Very straightforward, and descriptive.  No confusing attempts at high literary symbolism.  The short length of the novel (novella) doesn't really give you time to loose interest.
Posted by russell1200 at 5:00 AM