Lights Out: A review

David Crawford's (aka Halffast)  Lights Out is famous in a sort of underground post-apocalyptic sort of way.  It is the story of a small residential development in Texas' survival after a electro magnetic pulse (EMP) event.  Originally serialized on line with many pdfs available - that is the format I read it in.  The author originally made a point of it being gratis to the public as a service, and then pulled the copies (as he was able) so that he could sell generate some income from it.  The later version is slightly revised and shortened. 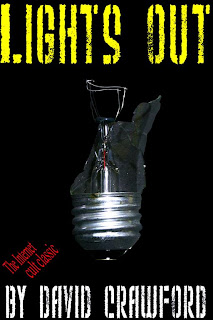 David Crawford (interview here by James Yeager) originally wrote the story under the name Halffast which as I understand was his "handle" at AR-15.com.  It appears to have been published in serial form at somewhere around 2003-2006. He has part of a second story called Lost and Found online.  He lives near (or in) San Antonio and likes a variety of outdoor activities and is a third degree black belt and teachs karate.

The disaster is introduced in the prelude so there is not a whole lot of surprises.  A billionaire Arab has scratched together some soviet surplus warheads and some rocket science technology to make the west go "lights out" with a major EMP strike.  The EMP of this book is the extreme version as found in One Second After.  It is not what I consider a terribly plausible scenario (unless as part of an overall nuclear campaign) but it gets the job done quickly:  in one second so to speak.

Mark Turner is trying to pull his family and neighborhood neighborhood (outside of San Antonio Texas) together to survive.  The very loose plotting of the novel puts you in the situation of Mr. Turner allows for a lot of "what if" type thinking.  The book is specifically written with the idea of helping people to prepare for a disaster.

The book is an absolute classic of the self-help survivalist style of apocalypse-in-progress fiction, and I am hard pressed to think of a better example of the typed.  The combat sequences are probably some of the more memorable parts of the book, but the difficulties and arguments of a large group of people trying to band together to survive a difficult event are also very much on point.  Mark Turner is a little to young, and a little to physical of a person to make his experiances that of an everyman, but he is not a superman either.  He makes a lot of mistakes.

For our descriptive (not qualitative) ratings (1 to 7 with 7 high), we will start with grittiness/realism.  Again the actual cause of the disaster is not factored into this rating, so the likelihood of a Saudi oil baron striking the West with an EMP burst is beside the point.

Written at least in part as a primer, with the distinct purpose of letting people think through their own reaction to the situation, and with no more knowledge being granted than someone would likely have in the given situation, you have to give it a 7.  It is very much an attempt at being real.

Readability is harder.  It is very long (shortened a little in the commercial version), and the characters are occasionally a bit stereotypical.  The information dumps are not as bad as some books of the type, but there is a tendency to be very slow in developing the various strands of the narrative.   I am going be cautious and put it at the midpoint of 4.