This discussion grew from another discussion on collapse in the American Southwest prehistoric societies and its relationship to our currant drought situation there.
To keep that post from getting too long, I am breaking out the discussion of some of the individual societies/empires that were part of a larger concurrent collapse.  Usually when I am doing a "collapse of an empire" post it is of a lesser breed to expand the discussion beyond the  Rome - Maya examples endlessly offered.  That is not exactly the case here.  The collapse of the Anasanzi (also identified as of, or within, the Mesa Verde Culture) is maybe only one step down in the collapse-fame category.
The area occupied by this culture is indicated below, and is from an excellent summary article here: 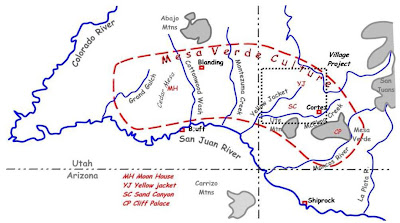 The ebb and flow of people within the culture is confusing.  You had various complex agricultural settlements that over the very long period of time discussed, greatly changed their settlement pattern based on various internal and external changes:  many of which can only be guessed at based on the architectural record.
What you can see is that there was a dramatic drop in the population somewhere after 1100 A.D or 1200 A.D.   This site, using the term "Chaco society" (of Chaco Canyon), puts the causal drought at 1130 A.D.  At that point, an with further droughts in the 13th century A.D., their were massive territorial and population contraction of what were to eventually become the Pueblo. 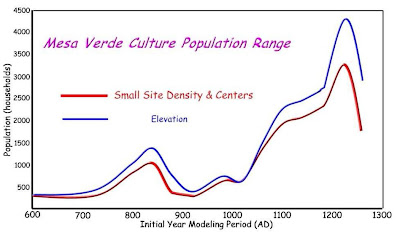 You will note that there is a drop off at the same time that the Wari, and the Tiwanku Empires fell apart, and there was a drop of in the Mississippian Culture at this time as well.
These broad area collapses across such a broad area, and coincide with long term weather patterns complicate the story of (every doomers favorite) Joseph Tainter's complexity collapse, and also Peter Turchin's biologically derived (cliodynamics) modeling.  John Michael Greer's Catabolic Collapse, although maybe a little more flexible, to my mind is not successful because it leaves too much power within the hands of human agency. Is it truer to say they collapsed because of the cost of maintaining their capital stock  ( "M(p)" as it were), or that we notice because they built up the capital stock in the first place.  Is it not fair to say that when modern humans are re-settling late gglacial period Scandinavia,  that the original culture has died out and been replaced.  It seems a little unfair to say that the first people don't count because they did not leave an Eiffel Tower behind (unless it was in ice-sculpture form) before they vanished.
I don't think that there theories are made null and void.  It just seems as if there is a dimension to the problem that our biblical ancestors seemed to have a better understanding of.  When the God(s) get angry, and you are dealt a poor hand, your time is up.  When your time is up, your time is up.  You can be complex.  You can be simple.  You can be numerous.  You can few in numbers.  When the volcano blows, when the earth shakes, when the rain stops, your time is up.
Posted by russell1200 at 5:00 AM