There is a long article (Tomgram) by William deBuys at  TomDispatch.  . It discusses in three parts the continuing and coming drought in the American Southwest. I am only touching on the third part of his long and excellent essay.
Mr. deBuys is the author of a new book, A Great Aridness: Climate Change and the Future of the American Southwest (I am using the TomDispatch Amazon link intentionally). 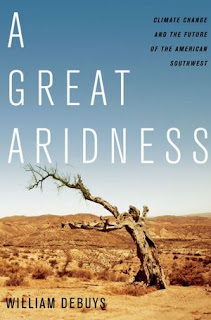 The Age of Thirst in the American West
Coming to a Theater Near You: The Greatest Water Crisis in the History of Civilization
William deBuys, TomDispatch, 4 December 2011.

Drought affects people differently from other disasters. After something terrible happens -- tornados, earthquakes, hurricanes -- people regularly come together in memorable ways, rising above the things that divide them. In a drought, however, what is terrible is that nothing happens. By the time you know you’re in one, you’ve already had an extended opportunity to meditate on the shortcomings of your neighbors. You wait for what does not arrive. You thirst. You never experience the rush of compassion that helps you behave well. Drought brings out the worst in us.

There is something in the way of a tautology how this reaction is decribed.  A variaty of ancient irragation and aqueducts displayed impressive cooperative effort and engineering to alleviate their societies water issues.  However, from the point of modern civilization, the his point is well taken.
Drought, as he notes is not new to the Southwest:


Because tree rings record growing conditions year by year, the people who study them have been able to reconstruct climate over very long spans of time. One of their biggest discoveries is that droughts more severe and far longer than anything known in recent centuries have occurred repeatedly in the American Southwest. The droughts of the Dust Bowl in the 1930s, of the 1950s, and of the period from 1998 to 2004 are remembered in the region, yet none lasted a full decade.

By contrast, the drought that brought the civilization of the ancestral Puebloans, or Anasazi, centered at Chaco Canyon, to its knees in the twelfth century, by contrast, lasted more than 30 years. The one that finished off Mesa Verdean culture in the thirteenth century was similarly a “megadrought.”…

Much of the Southwest is marginal land for agricultural production.
If you use sophisticated irrigation and water retention methods the land becomes less marginal. The more sophisticated the methods, the less marginal they are. You can see something similar in Of course the nature of that margin for error is not only dependant on how much you can consistently produce from the land, but also what sort of population load you are trying to carry. Very few people who live in the Southwest (as a percentage of population) are involved in farming or animal husbandry. If everyone not involved in those activities moved somewhere else, water usage would drop to the point where the margins of water usage would be much larger.
Something can be seen in the earlier history of Europe. The areas that hug the Mediterranean were always very productive. The Mediterranean climate zone for agricultural production often pushed well up into what is now Germany and France. But occasionally, and for extended periods of time, weather patterns would shift, and the middle European latitudes could no longer grow the same amount of crops. And people would start moving. You would have the Dorian invasions, the Sea People, the Celts, to name just a few.
In the Americas, agricultural products started in South or Central America and tended to travel North. First was squash, and latter corn. The American Southwest is an obvious early destination for these crops.
From Wikipedia we can see that some of these droughts were very wide spread.  In the case of the Mississippi culture, we have discussed them before.

The ancient Pueblos attained a cultural "Golden Age" between about 900 and 1150. During this time, generally classed as Pueblo II Era, the climate was relatively warm and rainfall mostly adequate. Communities grew larger and were inhabited for longer periods of time. Highly specific local traditions in architecture and pottery emerged, and trade over long distances appears to have been common. Domesticated turkeys appear.

After approximately 1150, North America experienced significant climatic change in the form of a 300-year drought called the Great Drought. This also led to the collapse of the Tiwanaku civilization around Lake Titicaca in present-day Bolivia. The contemporary Mississippian culture also collapsed during this period.

And note, if I am understanding this correctly, this is the lesser of the two droughts that wiped out the Southwest agriculturalists, as the Pueblo were able to hang on as a remnant at the periphery.
Posted by russell1200 at 5:00 AM

The question today is how long until the cost of getting water to the SW becomes prohibited?

My guess is that if the area only had the same technology as the Pueblos cultures it would already be pretty much UN-inhabited. For the most part the SW is simply living off the surplus energy of other parts of the US in the form of massive water retrieval and redirection.

To some degree we are all living off the massive surplus of energy allowed by the harvesting of fossil fuels.

However, the Southwest along with our western breadbasket states both have to be a bit concerned with water issues in a low energy world.

It gets all tied into the old theory that rain follows the plow.

Simply because something can work for decades (or in extreme cases, centuires) does not mean that it will work forever.