Love in the Ruins: A Review

Walker Percy's Love in the Ruins (also made into a short movie in 1995) is an  apocalypse-in-progress set in Louisiana in what was the future (~1983) when it was written (1971).  It is a very slow apocalypse, one where the the United States has run out of fuel (it is in the post auto age) and is tearing itself apart with its warring cultural divide. 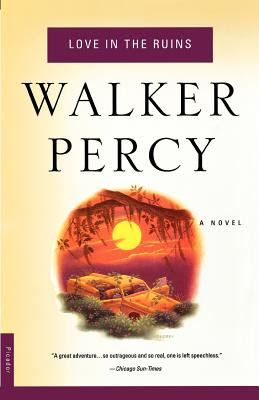 Walker Percy is stunningly famous within certain literary circles.  He is remembered fondly within Southern literature circles, and by many within the Catholic faith as well.   He made his success by being a Christian writer who did not write "Christian" novels.  It is very similar to the notion that John Jermiah Sullivan explores in his Pulphead Essays, where he notes that the very best Christian musicians are not in Christian Rock bands, but are simply Christians who happen to be in Rock bands
The story is satire.  It is meant to be, and often is, humorous.  It is extrapolation the events of the 1960s Vietnam War, and Cultural revolution and taking them to their illogical extreme.  The book can have a very dated feel at times.  But at the same time it is odd how many of the points of divide that he was worrying about and extrapolating from in 1971, are still with us today.
The viewpoint of the novel is told from the not very sober Doctor Thomas More.

"I believe in God and the whole business, but I love women best, music and science next, whiskey next, God fourth, and my fellow man hardly at all.

He is hanging out in an abandoned Howard Johnsons motel with three young ladies, knowing that the world is soon going to go pieces.  On the Fourth of July to be exact.

He has invented a machine that can look at peoples psyches-souls and see three true patterns.   With a little help from the Devil, who shows up in the guise of a Private-Public grant foundation representative, the device is also able to make some "adjustments."  It is all very bizarre, but needless to say it gets out of hand.
As I noted above, Percy is trying to do more than tell a story.  He has  a point to make.  While he is telling the story as satire, he is trying to say more about the state of modern life in the Western World.
ASS-KICKING FOR JESUS' SAKE:  Walker Percy's Vision of the Christian Artist
Matthew Woodley, Mars Hill Review, Not Dated

"Why does man feel so sad in the twentieth century?"

What is the bacillus infecting post-modern man? Why is the canary gasping for air and urging the miners to head for the surface? Or, in Percy's own words, "Why is the good life which men have achieved in the twentieth century so bad that only news of world catastrophes, assassinations, plane crashes, and mass murders can divert one from the sadness of ordinary mornings?"

For many of the characters in Percy's novels, life in post-modern American society is so unbearably sad, fragmented, alienated, and absurd it can only be labeled a living death. "I am surrounded by the corpses of souls," laments Father Smith in Love in the Ruins...

In Percy's view, then, God is the missing party who must be found. Those who find him must be wrested from everyday life and, Jacob-like, grapple with God, refusing to let go..

So there is more to the story than the surface events.  Sometimes the point is obvious.  Other times it is all very confusing.  The author had this himself to say about his third novel:
Walker Percy, The Art of Fiction No. 97
Interviewed by Zoltán Abádi-Nagy, Paris Review, ~1973


Love in the Ruin?

PERCY:  Love in the Ruins was a picnic, with everything in it but the kitchen sink. It was written during the Time of Troubles in the sixties, with all manner of polarization in the country, black vs. white, North vs. South, hippie vs. square, liberal vs. conservative, McCarthyism vs. commies, et cetera—the whole seasoned with a Southern flavor and featuring sci-fi, futurism, and Dr. More, a whimsical descendant of the saint. After the solemnities of The Moviegoer and The Last Gentleman, why not enjoy myself? I did. Now I have seen fit to resurrect Dr. (Thomas) More in the novel I just finished, The Thanatos Syndrome. He is in trouble as usual and I am enjoying it.

Walker Percy has been so influential at times, at least in some circles, that you can pick up very good point about his works in interviews of other authors.  Here we have an interview of Carl elliot
An interview with Carl Elliott
Michael Szpir, American Scientist, ~2004
How did you come to write a book about identity and "enhancement technologies?" The deeper question, I suppose, is how did you become interested in identity and self-invention?
It started in medical school when my friend Daniel Fort introduced me to the novels of Walker Percy. Percy's third novel, Love in the Ruins, is about an alcoholic psychiatrist and ex-mental patient named Thomas More. At that point in my medical training, becoming an alcoholic psychiatrist was looking like a pretty attractive career option, so I read the novel very carefully. Tom More invents an instrument called The Ontological Lapsometer—or as he calls it, a "stethoscope of the human soul." With the Ontological Lapsometer, More can diagnose and treat existential problems. If you're alienated or anxious or lonely, a quick temporal lobe massage with the Lapsometer will put you right.
What really struck me about Love in the Ruins, what made it cut really sharply, is that More's patients don't just feel good after a treatment with the Lapsometer. They feel fulfilled. They feel energized and creative and liberated. They feel like themselves. Their lives have meaning again. Now, a drug that gives meaning to an otherwise meaningless life: Here is a truly terrifying idea.
Love in the Ruins was published in 1971. When Prozac came along 20 years later, I started talking about it with my brother Hal, who is a psychiatrist at Wake Forest University Baptist Medical Center and a serious Percy reader. And for us, of course, the obvious parallel was the Lapsometer. Some of the people taking Prozac sounded eerily like the characters in Percy’s novel. They were saying things like, "On Prozac, I feel like myself again."
So the question became: If this drug really does make you feel fulfilled and authentically yourself, what's wrong with that? Well, maybe nothing. A lot of people think not, and it’s true that antidepressants are an essential part of standard treatment for full-blown clinical depression. Percy has a much darker view, of course. At one point in the book Tom More is approached by Art Immelman, who wants to buy the rights to the Lapsometer and market it for the drug industry. He tells More, "Doc, we’re dedicated to the freedom of the individual to choose his own destiny and develop his own potential." Art Immelman, of course, is the devil.
He is somewhat simplifying Immelman's role. Note that Immelman is the German World War 1 pilot, who perfected the reverse loop maneuver in areal combat. In other words looking like your going one way, when you are actually going back the other. It also important to note, that the Devil-Immelman is not lying when he’s says he wants individuals to choose their own destiny and develop their own potential. To Walker's mindset, that is the trap of the modern world: self-fulfillment in the absence of God.

There is a lot more I could go into, a lot more. But in the interest of "brevity" I will begin to wrap it up here.
Did I enjoy the book? Yes up to a point. I have always found his works to be a bit difficult to read. Very high on introspection, very low on concrete activity. This book has a little more activity than some of his other famous novels (Movie Goer, The Last Gentleman), but the satire is oddly dated at times. Both American conservatism, and liberalism have moved on to different places, and we now know that both the Flower Children, and the Black Panthers were soon to fade in cultural-political influence. By writing in such a contemporary style, he looses some of the universality of his message.
Well, we are back to the, as ever, descriptive (versus qualitative) ratings (1 to 7 with 7 being high). For realism/grittiness...well you have sulphur clouds coming out of sand traps....LOL. It is satire, it is intentionally surreal. The good doctor actually does use a fair amount of tactical skill in avoiding the occasional sniper, and unlike the much later Neuromancer, he actually anticipates cell phones, but they are dwarfed by all the rest.  It is an intentional 1.
For ease of reading.... Satire is often a bit hard to follow. Almost by definition there is going to be a fair amount of symbolism to puzzle. In this case the dated nature of some of the points in contention are likely to bring additional confusion. It is not without its occasional action scenes, but overall it is a relatively literary and somewhat lengthy (400 pages in the perfect bound version). If some novels are 2 because they are painful to read, this one is a two because it is a little bit difficult. Worthwhile, but difficult.
Posted by russell1200 at 5:00 AM