Starvation Ridge - These Will I Bring: A Review

Risa Stephanie Bear’s These Will I Bring, is Book I of the mid-Twenty first century post-apocalyptic  Starvation Ridge series.  The primary setting of the novel is an isolated remnant community in the mountains overlooking the Williamette Valley somewhat in the area of Coberg and Eugene, Oregon a generation after the collapse of the United States. It is available in a variety of e-versions, and hard copy. 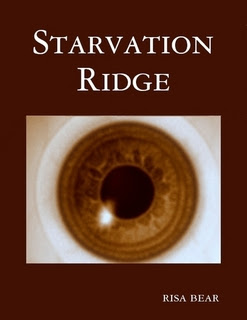 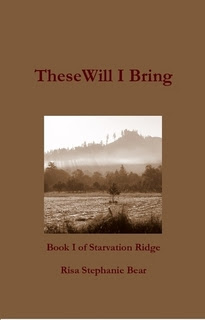 Risa Stephanie Bear is a retired archivist for the University of Oregon Libraries. This of course means that her work is better fact-checked than most fictional accounts. She has written a number of works in a variety of areas. She is currently a  self-employed subsistence farmer and writer.
Althoug the book uses multiple first person points of view, the primary character in the novel is Karen, a young teenager from Northern California who appears to have been born right around the time of a peak oil-economic collapse with an apparent longer term environmental collapse causing further problems. She is raised by her father in a hidden basement bunker and is taught a variety of pre-collapse skills (reading) but with an eye toward self-reliance, and survival awareness.
The book starts with a relatively brief telling of 14 year old Karen’s adventures in being forced to leave her hidden home after an attack on their compound, and the death of her father. Without a supply of food, she wanders around the very mixed bag that makes up this post-apocalyptic world. There are some older folks who are just trying to live out their last days in peace, and an allusion to a number of not very nice groups that Karen does her best to avoid. Although this portion of the book is not very long it does bring up a number of interesting observations- the author has an eye for the telling detail. It also avoids that feel of a surreal post-apocalyptic road trip that does so much to kill the immediacy and tension of so many books within the genre.
The final part of the book is the defense of a small isolated farming community at Starvation Creek against a small band of cannibalistic raiders. Some portions of the defense scheme are brilliant; other parts of it are inept. The Raiders themselves are fairly competent, but make their own mistakes as well. The casualties are extremely high – as would be expected from the close quarter combat that occurs when most of the participants are using muscle powered missile weapons (bows and crossbows), and a variety of edged weapons. Both sides learn why both the Indians and the American frontiersman on the East Coast avoided pitched battles when they could.
In general it was a very interesting novel. The greatest difficulty I had with it was that there were too many characters from too many families to keep up with. There was also a tendency to switch from points of view from characters who were in the middle of the action to characters who are ruminating and navel gazing on what might have been and should be. It lead to some agonizingly slow pacing at times, and tended to hurt the more sedentary scenes as they are being contrasted with fast-moving high-impact scenes.
The leadership dynamics of the cannibal band are a more thoughtful version of the Mad Max genre. Even if cannibalism is not a viable long term survival strategy, I will grant you that it is a popular way to bring some villainy to people who arguably would otherwise simply be people trying to survive. But a look at some of the most ferocious groups in history - Caribbean Pirates, Steppes Horseman, the Cheyenne - shows that their societal norms did not involve top down coercion. It is a very poor way to instill battle field cohesion. To see real world results of this type of leadership, you could look at the Italians right before the WW1 Battle of Caporetto, or any number of WW2 German minor-ally disasters. As it is, Wolf,  the charismatic leader of the bad guys, makes a fine post-apocalyptic Pirate Captain and is one of the more interesting characters within the book.
These Will I Bring is an enjoyable read. There is a lot of interesting factoids, and even applications of factoids, without the information dumps that “survivalist” fiction is prone to. The confusing array of characters does not hurt the action scenes. It just means that when everyone is sad because so-and-so got killed, you cannot remember exactly who ao-and-so is.
It is an odd book in that  twice(!) the author sets up a post-apocalyptic cozy, and twice (!) it falls apart. Coziness falling apart makes for some interesting reading. It is a little like a post-apocalyptic collapse versus the usual post-apocalyptic rebirth story.
For our descriptive (versus qualitative) cross-comparison ratings of grittiness (realism), and readability (ease of reading) on a 1 to 7 scale (mid-point is 4; 7 is high) :
Grittiness is an obvious 7. It is set in the very near future, there is very little speculative technology, and peoples activities range from cooperative to brutal. The range is actually more realistic than those novels where people tend to be brutal all the time.
Readability is more difficult. It is not written with the inaccessible sophistry -which I often like- of a literary work, but the non-confrontational parts of the story are confusing and jumbled. As I noted, it can be difficult to keep up with all of the characters. On balance, I am going to say that there is a little more clarity than confusion, and say that it is a 5. I read it once in its online version, and once as a pdf.  A twice read book cannot be all that inaccessible.
Posted by russell1200 at 5:00 AM

This is a perceptive review; thank you. For a first-time novelist, I appear to have gotten away with a lot. ^_^

Thanks- It helps that I read it twice. Once as you were posting it, and latter from a copy I bought online. Although the cast of characters gets confusing, it is an admirable attempt to try and bring a little more realism into the thought patterns and concerns of a post apocalyptic setting.