Holding Their Own: A Review

Joe Nobody’s Holding Their Own is a near future (2015) relatively slow apocalypse-in-progress novel set in a suburb about 25 miles outside Houston, Texas. 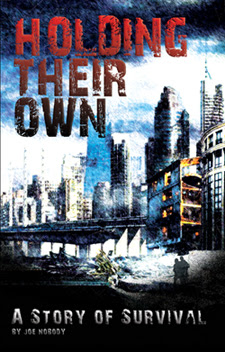 The author wishes to remain anonymous, but on his amazon biography it notes that he is involved in consulting and training with the U.S. military, and the Department of Homeland Security.   He is obviously a firearms enthusiast.  He apparently has become involved in the personal security measures of certain clients, and this has derived a series of books relating to this issue.
At the start of the novel, the U.S. is going through a second recession (presuming  of course that the 2008 recession ever ended) and gasoline is well over $6 a gallon.  Employment is over 20% and you have a great depression like cyclical downward spiral.  The first 25% or so of the book details the various agents of the collapse.   It is a combination of poor political decisions, poor economics, and an international crises brought on by Iranian terrorism.  It is the only novel I have seen that actually features a plausible EMP-strike: and it does not affect the people in the novel.
Realistically, the urban centers tend to burn down not because people willfully set them on fire, but because accidents and mishaps cannot be controlled when layoffs have stretched service staffing to the breaking point.  Some of his incidents tend to be on the spectacular side, but all it would take is the modern version of Ms. O’Leary’s cow to get the job done.
As noted, the initial setting is a suburb about 25 miles outside of Houston.  Based on stated concerns about hurricanes, distance, and a few other clues, I am guessing that it was modeled on one of the partiall-built subdivisions of Kemah, Texas. This of course has a lot of resemblance to the cul de sac development in David Crawford’s Lights Out which was set in the suburbs of San Antonio, Texas.  There are a few other notes in the book, not always major ones that seem to indicate that the author is a fan of some of the post apocalyptic genre.  Another example, is the death of a periferal character from dehydration when their elevator get stuck in permanant power outage (as in The Dead and Gone)
As we move further into the personal disaster portion of the novel, one interesting touch is that the initial reaction is very similar to that of a Hurricane threat.  People rush out and get gasoline, and then the middle class pretty much hunker down with their little generators to keep their food cold. As power goes out, and information becomes limited, there is a considerable delay before the scale of the disaster sets in.  In the case of this particular development, the lack of a through street allows the action to develop a little more slowly.  In this case the neighborhood does not realize that mayhem has erupted until they leave the neighborhood to go to the police station.  Once the action gets going, it goes from 0 to 60 mph in about half a chapter.  Soon it gets so hot, that our heroic couple decides on a belated bugout to the desert reaches of Texas near the Mexican border.
And I will stop our narrative description here.

In a society where maybe 1% of the population has military experience, it is generally the case that 80% of the heroes in these types of novels will not only have military experience, but extensive tactical experience as well.  Our hero, Bishop, is all of these, and a competitive shooter as well.  He combines these skills with impulse control problems, needlessly getting himself into some difficult spots even before the stuff hits the fan (SHTF).  He also seems to have a fondness for heavily overt sexual innuendo with his wife.  It reminds me of the constant cutesy talk in Donna Callea's  New Coastal Times.  I realize that some people talk this way, but it is the perfect device to make a character annoying:  more useful with a sidekick or flunky, than the main Ramboesque hero.  Take it from the expert, strong and silent works better.  As the novel moves along the "witty" dialogue fortunately lets up some - or maybe I just got used to it.

The author fully buys into the modern cult of the special ops - sniper.  These of course are very useful skills in a combat setting as far as it goes.  Within the story line there is a lot of aggressive action, as in either a Western or a in a Stephen Hunter sniper type novel.  This makes for an exiting story, but is odd in a  novel supposedly written as a primer to survival in a societal collapse. Stories of the "Wild West" and pioneer settlers are often quite exciting.  But the actually reality is another story.  Most survivors are not going to have much of a story to tell.  That is why they survived.  The exciting stuff happened to other people, and a handful of those people survived to tell an exciting story.

Here is an example from the story.  The hero and another special ops friend are going to mess with a bad guys compound.  In this particular case they were not able to do much scouting and know very little about the particulars of the  compounds defense.  They do have enhance night vision (not IR) and are smart enough to go in at night.. They have a rough idea of how many people are in this group of bad guys.

The two men circle around exploring the compound area a number of times.  They eventually spot a suspicious location.  They sneak up on the location, and feel around in the dirt for the soft soil.  Than they stab blindly through the cardboard (why cardboard?) of what ends up being a spider hole that an  ex-marine trained sniper is hiding in - killing him noiselessly and alerting none of the other guards.  As this particular action progresses, we find that  the bad guys, who have set up some incredibly intricate traps, cannot be bothered to sandbag their hidden blockhouse:  Impossible? No.  Likely?... Again, it makes for a lot of fun in a story, but a story that is advising people on how to survive a violent chaotic world should go something like this:  Get lots of food, and hide.  Don't make any noise.  If you see bad guys run away.  Avoid hidden snipers in spider holes, don't attack fortified bunkers, etc.
The good guys in  an effort to get across a highway choke point,  are willing to take on multiple-groups of numerous bad guys, in what should be reinforced/protected buildings.  It would not be fun, but with those odds against you, wouldn't you be better off hiking your stuff across (they have a gasoline can)  deserted portion of the highway and finding a vehicle that ran out of fuel on the other side?
So what was my general assessment.  The first quarter of the book, the setup, was O.K. if mostly superfluous.  The action portions had some fun moments.  There are some nifty little ideas thrown in there.  It is hillarious to here the hero talk about his careful battery management program after having assaulted a couple of bunkers, and a small unit of mounted (as in Bradleys) infantry.  The author loves mousetrap triggered shotgun shell traps even more (maybe) than Rawles loves gelled gasoline in a bottle.  It is the Wild Wild West version of survival fiction.  A little more plausible, and a lot more tactical thought than Nova's American Apocalypse series:  no Nordic Gods.

Some of his advise is a little debatable.  Having worked in construction, I am a little doubtful that under less than ideal conditions someone would be able to produce Hollywood backdrop style props to hide vehicle sized objects behind.  Those types of illusions can work, but they usually require careful control of lighting and the angle of view.  He makes a big deal about how hollow point rounds make the relatively light 5.56 NATO round (M-16, M-4 and civilian AR-15) more deadly than the full metal jacket that the military uses.  Then his characters spend a lot of time shooting through semi-solid cover that hollow points have a hard time with:  that is why one of the Police TAP rounds that Hornady makes is intended for barrier penetration.   They also make the round with "low flash" powder to prevent self-blinding at night: something that does not seem to bother our heroes.  Bad guys (or redshirt good guys: sorry gramps)  usually die quickly, the hero gets injured: flesh wounds and cracked ribs.  So, in net, I found it to be entertaining, but with serious reservations.  If it had simply been billed as apocalyptic adventure novel (rather than a primer), my expectations would have been different.

It should be noted, that while the novel is a complete story, the ending clearly threatens a sequel.

For our descriptive (versus qualitative) ratings (1 to 7 with 7 being highest), we will start with realism/grittiness.  The quality of the collapse scenario does not count toward the rating, but in this case it would be a plus.  While you could never call any particular detailed collapse story likely, it is certainly plausible.  The book deals with near future technologies, and very real tactical problems in a contemporary setting.  If I questioned the "realism" above, it is because it claims to be a primer.  Within the context of the rest of the books within the class, it does very well.  If I start taking off points for morality-driven firearms damage, most of our action-driven novels would be dwelling in the cellar.  There is nothing that is trying to be fanciful, so I will give it a reluctant 7.

For readability, the book scores surprising well for what appears to be a first time effort at fiction.  Particularly in the early portions of the book, it wanders a little at times.  The double entendres are a matter of taste, but don't wast too much paper space.  I am going to say that it is a 6.  The action scenes are set up well, and are far more coherent and as well paced as any I recall within the realistic-ction-apocalypse genre.