Enfold Me - A Novel of post Israel: A Review

Steven Greenberg's Enfold Me- A Novel of Post-Israel, is an post-apocalyptic tale, almost an apocalypse-in-progress set shortly after the State of Israel has been overrun by Shiite Muslims coming from Lebanon, and "rescued" by Egyptian "allies" occupying the southern portion of the country to prevent it from being captured by Iranian forces.  An excerpt from Chapter 2 can be found here. 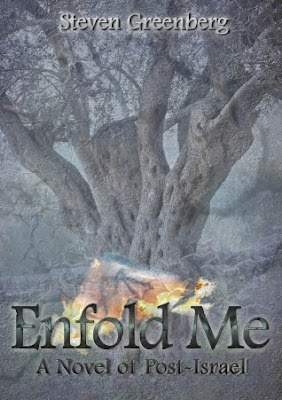 Steven Greenberg was born in Texas in 1967 and moved to Israel shortly after graduation from Indiana University in 1990.  As is typical in Israel, he served 12 years as a reservist-medic within their armed forces (IDF).   He has worked as a contract writer for ten years, but this is the first work that he has published under his own name.


There have been major energy source breakthroughs that have made the United States a little more complacent about Middle Eastern affairs and less willing to interfere.  Iran has stepped into the void and taken over Iraq, much of the Persian Gulf, and controls Lebanon, and even parts of Southern Turkey.

When a 7.8 Richter Scale earthquake hits just east of Tel Aviv, much of Israel is digging out of the rubble when enemy forces come storming across the border.  First it is the Shiites coming from Lebanon and Syria and grab the northern portion of the country.  Then the Egyptians, concerned that their Shiite enemies will roll up the entire country come in as "rescuers" from the South.  As the Egyptian position is a bit more ambiguous, they control the lion's share of the country.  The Northern occupation area, is a disaster.  Many Israelis are slaughtered, and many of those not slaughtered are pushed out of their homes to make room for Muslim families returning to their homeland from exile.  Islamic law is instituted, and the Jews are treated as serfs.   The novel starts 10 months after the fall.

The story begins with Daniel Blum, left behind in the collapsed Israel, as his family was able to make their escape.


Daniel had started almost every day like this since the Fall .  And, for the last six months every morning, he would step out the front door of the empty house -seeking the morning paper in his sleep-fogged habit.  Surveying the scene, and recalling again that no paper would be arriving, he would think it shouldn't look like this.  How could it possibly look like this?

Because it should be a Munchian nightmare - a flaming orange-swirled sky blocking a feeble sun, which, sapped by grief, would lack the fortitude to continue lighting the scene.  There should be no green, no flowers, no dogs frisking in the sunshine.  No people save the sexless, devoid figure in the foreground - with unseeing agonized eyes beseeching....Ten months after the Fall, Daniel stepped off the front porch - peeling paint and overgrown hedges more testimony to absence than to apocalypse- and he was again struck by the excruciating normalcy of the scene.

The scenes within the collapsed Israel are well done.  Not everyone is dead, but not everyone wishes they were still alive.   In another short piece:

Once he left the central region of the country, to the south..., the scenery had taken on a rustic, pastoral charm.  Post-apocalyptic pastoral charm, of course but charm nonetheless.  If you looked past the sprawling refugee camps that the sandy dunes ...had become, past the dirty-faced children waving at passing cars, past the dogs fighting over scraps in makeshift garbage dumps behind blackened bus stops, past buses abandoned on the side of the road that were now inhabited by two or even three families, past the occasional desiccated corpse littering the shoulder of the road - then you could always find beauty...

There is a level of detail.  The thought that there is a world there beyond what is interacting with our current story, and that it is a very scary world.    There are not a lot of books that pull off, not exactly world building, but more the sense of a scene, than this one.  Unfortunately not all of the book involves movement within these scenes.

There are a number of pace slowing flash backs, and even odder nightmare sequences.  Some to the characters personal lives, and others to some earlier experiences some had with neo-Nazis in the United States, or torturing brutal American troops in the First Gulf War (Desert Storm).  These scenes are very poorly done.  The exact point of them is a bit unclear.  So a couple of neo-Nazi's do horrible things in the United States in the 1980s and a handful of U.S. troops get a slap on the wrist in the First Gulf War?  I think we are long past the point where people buy into the idea that the United States is a country that will not stoop to the ugliness (some would say the necessities) of war.  And does anyone think Neo-Nazis are nice people?   These strange, nasty scenes, seem more to the point of showing, through the surrogate characters, why Daniel/Steven Greenberg immigrated (aliyah) to Isreal.  The release of the book to coincide June 5, the 45th anniversary of the Six-Day-War in 1967 was no doubt an intended irony.  Oddly enough, outside of the events unfolding from the practise of Koranic Law, there is almost no discussion, or really any concern, with religion.


Daniel himself is an odd character.  It would be a reach to say that he is incompetent.  It would be closer to say that he is a normal person stuck in a scenario where above normal is required.  He is frequently slow on the uptake, and given to (understandable) panic under extreme circumstances.  As the saying goes in wargaming rules, he fails his "moral check" frequently.


Did I like the book.  Yes, I did.  But I almost didn't.   It starts out well, but than the flashbacks, the ethical musings, and the nightmare sequences drag it down.  In addition, although the action gets increasingly real, and tense as the novel progresses, the earlier action scenes are a little less captivating, possibly a little implausible.  But it improves:  improves a lot.   The cartoon characterizations, give way to a more ambiguous, gray world.  In addition, though I won't hint at them here, the novel manages to pull off not one, but two fairly serious changes of directions:  plot twists most people won't see coming.

We have our descriptive ratings: Realism and readability:  1 to 7 with 7 being high.


Realism is high.  As I noted above, the collapse scenery and tone is well thought out.  It may not be as complete a collapse as some scenarios we have discussed, but in its well thought out details, it is grimmer than most.  I used to call realism grittiness.  Well it's gritty:  a 7.


Readability is a little harder.  It reads quickly, and accelerates almost to where it is a page turner about 2/3 into the book.  But is does have some rough going, and not all plot points (the dreams) are explained in sequence.  There is a fair amount of ethical musings.  But I don't think most people would find them confusing, they simply make parts of the book move slowly.    In net, there is just enough of an action-adventure to the story to rate it above the midpoint: it's a 5.

It would be an interesting read but from your review more than likely completely out of date and implausible by today's political winds.

Pioneer: It certainly begs a lot of questions.

But at heart, the basic scenario is that Israels neighbors use a temporary disruption to overun it.

That is not particularly implausible scenario.