The Rest is Silence: A Review

Scott Fotheringham's The Rest is Silence (Amazon.ca) is an apocalypse-in-progress occuring at the edge point of a civilization teetering at the brink.  Set near a very small town, Middleton, Nova Scotia, Canada, it is what is sometimes known as a soft-apocalypse:  no big bang, and instant pandemonium, just a slow slide downward.  Against the backdrop of  Nova Scotia countryside, a man tries to set up a small homestead farm and learn to live of the land, as news comes in from afar that the all is not well with the world he left behind.  Someone has let loose a bio-engineered bug that eats up plastic, and as we come to find out, the man seems to know a little about those who are involved. 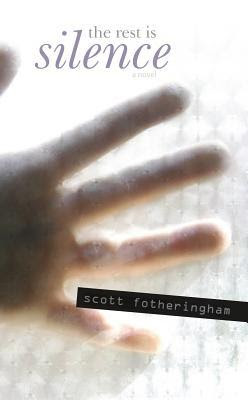 To some degree the novel's story parallels Scott Fotherinham's.  He has a PhD in molecular biology from Cornell University, and left a life in science to build a small cabin in the forests of Nova Scotia.  He now lives and writes in Ontario with his small family.  The novel has been reviewed well in Canada, and it won the Writers Federation of Nova Scotia H. R. (Bill) Percy (best novel) Prize  prior to publication.
Even without the plastic eating bacteria issue, the near future setting is not looking to good.  There are some hints early on.  The narrator notes coyotes in Nova Scotia without even thinking much on why Coyotes are so far North.  Ticks, previously unknown to the island, have managed to sneak in on a pant leg.  The  just started homestead farm is built on a little parcel of over timbered land, with only the thinnest of topsoil covering.  But these are hints, mostly the start of the novel.  The immediate story line investigates personal loses.  Reflections on the drowning suicide of his father, a nearby farmers wife invalided with dementia, the young Huron-Wendet  artist he meets who's family lost their original homeland centuries ago, and she is obviously looking for a place to settle.

Much of the story is a coming of age tale.  A very modern coming of age tale, where the boy becoming a man is involved with a fair amount of "adult" activities such as smoking pot, and casual sexual activity.  Activities that the teenager partake in, yet don't necessarily lead to adult ways of thinking.  So when our primary narrator leaves the modern world to set up his homestead in Nova Scotia, he is not yet fully an adult in temperament in spite of his being fairly on in age.

So the first thread of the storyline involves modern predicament of children/adults making their way in the world.  Granted the American post-war propensity for marrying at 18 and leaving to set up their own instant home was an accident of time and place.  In most cultures it took time for the men to build up enough wealth/prestige to be able to afford the expense of whatever passed for a household in their culture.  For example, the Victorians typically did not marry until they were in their late 20s.  But it is I think fairly unique to modern urban culture that people do not become full "adults" until they are in their mid-twenties - if they ever do.

Along with this problem of finding traction as an adult in a modern world is the extreme isolation that that is almost universal with the main characters in the novel.  The difficulty with finding meaning within the world drives much of the action.  The novel is suffused with (as the Smashing Pumpkins would say) melancholy and the infinite sadness: despite all our rage, we are all just rats in a cage.   The need to find the grand gesture, to make ones mark on the world, found in a minor key with your garden variety spree killers and reality TV "stars" plays out at a completely different level here.

There are different gender related issues that play out in an interesting sort of way, but at least to my mind don't really add up to much more than an extra twist to some of the novels proceedings.  I understand why they are there, but trying to illustrate universal truths through interesting plot devices is not going to lead to shattering revelations.
Did I enjoy the novel?  Mostly. It is well written.  The characters do tend toward that extreme introspection and wallowing self absorption found within our culture in general, but coming of age novels in particular.   The author, addressing the issue  from multiple character viewpoints, clearly has been put off by what his association of Christianity with hard noised, in your face mass market/grass root evangelizing.  He picks up fairly well on the selfish aspects of this culture.  He notes some sympathy for the divine retribution aspect of the religious apocalypse, but rejects most everything else.  He in effect has adopted the modern environmentalist stance that people are bad, without any corresponding positive message - a very stark world view.

I always find the play out in the soft-apocalypse novels to be interesting.  Characters are living their lives with the occasional benchmark of things getting worse popping up.  The barbarians may be at the gates, but we still have to pay our taxes, find a good water source, and convince our girl/boy friend to stick around.  This the novel accomplishes fairly well.  It is still a modern world, capable of some amazing feats, none of which will prevent the inevitable.
For our descriptive ratings: Realism and Readability: 1 to 7 with 7 being high.
The novel is in general very realistic.  There are a few logistical issues, like taxes, that are not particularly well addressed.  Homesteading, at some point unfortunately, becomes more than just an issue of getting the turnips to grow.  The authors experience with homesteading makes the hands on issues very real.  The authors experience with molecular biology, and bioengineering in general also make that sub-theme of the disaster very realistic.  Although I don't generally take off points for an "unrealistic" collapse scenario, that would not be an issue here. There is some elements of speculative science, so we will net it at a 6.
The novel reads relatively quickly.  There are occasional murky sections, and their isn't a lot of "action."    The novel uses the mechanism of a two track storyline (now and then), but uses it more as a means to double the "tracking of the mystery" than to accelerate into the action.   The novel very much has a low-key who-dun-it mystery aspect to it, and the suspense is ratcheted up by shortening the alternating narrative tracks as we approach the end.  So it is about as much of a page turner as you are going to get with such an introspective novel:  a literary 5.

sorry buddy - totally missed this post and don't know why??? great review tho, as usual! but based on your review, not a book i am gonna run out and get. plus, it's set on the mainland and us islanders don't care much for the mainland. sounds mean but it's true!

much love buddy! your friend,
kymber