Coming from an Off-Key Time: A Review


Bogdan Suceavă's Coming from an Off-Key Time (translated by Alistair Ian Blyth) is a satirical socially driven apocalypse-in-progress set in the Romanian Capital of Bucharest. 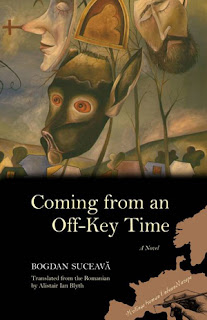 Bogdan Suceavă studied at University of Bucharest and Michigan State University. Since 2002, he has lived in California. He is the author of several novels: "Coming from an Off Key Time", "Miruna, A Tale", "Vincent the Immortal" and "The Night Someone Died for You", all of them written originally in Romanian. Published for the first time in Romania in 2004, this is the first of Suceava’s five novels to be translated into English.
It is the 1990s. Roumania is in tumult and chaos.  The Communist dictatorship has fallen and different groups are scrambling to find, or maintain their place in the world.  Where previously the authoriteis would have quelled any overt disorder that broke out, Roumania is now in uncharted waters.
At the start of the story we have the emergence of a small religious group that espouses an agglomeration of christian and new age-ish philosophies.  The charismatic leader is the relatively low key Vespasian Moisa.  Acting as something of an all-incorporating "big tent"  faith/philosophy, the core of the story is the way that the movement is pushed and pulled by both the varying internal aspirations of its members, and by its interactions with other social group:  social groups which include thuggish Nazi-like racial supremacists, and the still existent secret police.  As the group starts to spread, its very success begins to pull it apart.

The novel has a definite feel of a world in change. It describes a moment of chaos, when control breaks down, many societal forces, previously held in check, are unleashed.  The societal groupings previously in control can make no real sense of the affairs and their own actions have a somewhat random effect on outcomes.  In this case, the apocalypse is not a total destruction of society, but a continuing reassembling of its parts.

After noting that he came of age during the upheavals of the 1990s, the author in an interview makes this note:


That feeling of having lost something from long ago inspired quite a few scenes in Coming from an Off-Key Time, since these temptations and ideas resurfaced in the Romanian society after the fall of Communism. I dreamt for years of writing a novel that captured in a relatively short tale (perhaps about 200 pages) the whole local flavor of Bucharest, the colorful world that operates with inconsistent logic and vacuous rules, an eclectic atmosphere where the bohemian youth mixed with old apparatchiks, where fake scholars confuse concepts and ideas, where politicians and religious figures are despicable, and all of them together generate a bizarre political diorama. I can write other stories, but Coming from an Off-Key Time is the novel where I aimed to capture the logic of the world I grew up in.


Not surprising for a satire, there are many references to Romanian persons of literature and history, some are explained better than others.  The talking cat is a reference to Mikhail Afanasevich Bulgakov's giant talking cat in The Master and Margarita (written in 1940s, released in 1960s). One reviewer, who spoke with the author, noted that two of the followers of Vespasian Moisa,  Professor Diaconescu and Dr. Arghir, were based closely on  real people, and that they truly held to their theory of "vibrations".
What is interesting is that, intentionally or not, the story does a very good job of illustrating retrospective importance.  Because this story is told as the action unfolds, the participants are not aware of how events will all turn out.  Which people, events, and ideas turn out to be important are unpredictable and thus, from a personal point of view, random.  The story that gets told in the aftermath of events, is not really the story as it occurs.  The linear nature of specific acts of history is illusory.
Did I enjoy the book.  Yes I did.  It is a bit fanciful, but the various characters are entertaining, and you do get interested in seeing how events all turn out.  It is a very philosophical work, and probably leans more toward the dystopian than the apocalyptic, so it is not for everyone.  It makes far more valid points, in a much shorter period of time, than Dmitry Bykov's Living Souls, which we reviewed earlier.
For our descriptive (versus qualitative) ratings: Realism and Readability: 1 to 7 with 7 being high, and thus 4 the mid-point.
Realism is difficult to judge on some levels.  The book clearly has a lot of over the top events.  The Romanian spy who has been  turned into a cat (in homage to Bulgakov) by the KGB would certainly clue you in that it is not intended to be "realistic".  There are not a lot of survival issues going on either.  Life is chaotic, but most of the groups have some sort of monetary support that keeps day to day survival out of the picture - at least for the main leaders.  At the same time, the sense of chaos, and disruption are very well done.  The complete impossibility of being able to take into account all future happenings in a complex system is very well portrayed.  So rather than a talking cat 1, it is a 2.
Readability is a little more straight forward,  the translation is well done and the language flows smoothly.  It uses a lot of very specific imagery, which while not entirely necessary to understanding what is going on, does give the story some of its meaning.  I doubt I have caught all the allusions and symbolism.  It is not a long novel, so we will say that it is a little bit below the mid-point:  a literary 3.
Posted by russell1200 at 5:00 AM

And yet, the review is interesting and compelling enough, that I will hunt down the book. Thank you.

Jane: I did like the book. It's just not an easy read because of the literary references and symbolism. If Rawles "Patriots" is your idea of high literature, you probably won't like this one. LOL