The anthology 2012, edited by Alisa Kranostein and Ben Payne of Twelfth Planet press, features eleven short stories by Australian writers with the general theme of a near future apocalypse/unveiling.  Released in 2008, a number of the pieces seem to have been written during the heart of the G.W. Bush presidency, so the "predictive" qualities are a bit faded in some cases. 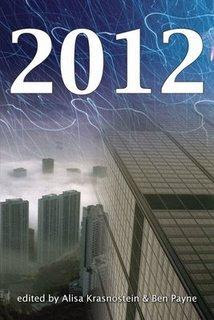 Alisa Kranostein is the driving force behind the small Australian publishing house Twelfth Planet Press.  They do ship to the United States, but this volume is out of print, and was hard to find even when it was new.
From a quick glance on past-works,  the two most apocalyptic writers, seem to be David Conyers (modern Cthulhu-style), and Sean McMullen (far future post-apocalyptic), and possibly Ben Peek - though he seems more dystopian (futures with mean people).
The anthology seems to have a general theme of a dark near future.  The stories are not in any way connected, although most of them have either a contemporary, or science fictional feel to them.
The stories are:
·         “Watertight Lies” by DeborahBiancotti
·         “Fleshy” by Tansy Rayner Roberts
·         “Oh, Russia” by Simon Brown
·         “Soft Viscosity” by David Conyers
·         “Apocalypse Rules, OK?” by Lucy Sussex
·         “The Last Word” by Dirk Flinthart
·         “Ghost Jail” by Kaaron Warren
·         “I Love You Like Water” by AngelaSlatter
·         “Skinsongs” by Martin Livings
·         “David Bowie” by Ben Peek
·         “Oblivion” by Sean McMullen
Although, I say science fiction, few of them that push much into technological speculation are particularly plausible.  We have ameoba-like creature based of a humane genome that can survive without a bone structure (Fleshy);  water-based soylent green scenario (Love You Like Water) that seem to have no concept of the inputs and outputs to a process (a clue: manufacturing almost anything uses tons of water); the most ambitious tale (Soft Viscosty) does not seem to understand how heavy water is, and why, even with pipelines, there is relatively little long distance water transport that does not involve gravity. Soft Viscosity's author has an engineering background, so he really doesn't have much excuse.  The way you transport water is by growing crops, or manufacturing water-intensive products and transporting the much lighter output.
O.k, so they are not great "hard" science fiction.  Few of them really try to be.  Shoot, one of them is a ghost story (Ghost Jail).  Do they work as stories?   Up to a point, but most of them seem rather "slight,"  drinking too deeply from the well of O. Henry with lots of clever little plot twists at the end.  Unfortunately, the plot twist driven stories remind you more of Lucy pulling the (American) football out from under Charlie Brown than the deeper insight of The Gift of the Magi.
It is extremely difficult to write effective short stories.  To my mind the best within this collection, are "Oh Russia", and "Oblivion".  Both of the stories counterpoint the collapsing world with personal loss.   The world is falling apart, but both focus on the death of a particular person,  in one a beloved wife, in the other an estranged father who is still grasping for a materialism that no longer is appropriate in a world of very limited means.

The book had a relatively short press run for the small press, so my guess is that the overall response was underwhelming.  My personal experience coincides with that assessment.  It is not devoid of entertainment value, but it is not particularly worth seeking out.  Should this collection seek you out in some O'Henry like coincidence, discounted at a used-book store, than it would be worth a look.

I am going to stick with my normal rating system.  Obviously this time these descriptive ratings should be seen in the greater holistic sense.  We have Realism and readability:  1 to 7 with seven being high.


Realism to some degree we already discussed.  They aren't trying to be hard science fiction, and in some cases, not trying to be particularly realistic either.  Most of them have a general sense of impending doom brought on by human hubris, and that is fair enough as to what the collection is attempting.  The "too cute" endings of many of these works tends to further distract from their applicability to real life.  They have entertainment value, but an apocalyptically themed collection should probably aspire to a little more introspection:  a 2.
Readability is fairly easy.  Most of the items that "cost" it in the realism department, tend to make it a fairly light fast read.  The stories can generally be read on a lunch break, and since they are not related to each other, they need not be read in one sitting, or truthfully, in any particular order.  It is a seven.
Posted by russell1200 at 5:00 AM