The Literary Conference: A Review

César Aira's The Literary Conference (translation by Kathrine Silver) is a mad scientist inspired apocalypse-in-progress set initially in Argentina and later at a mountain resort in Venezuela where there is, of course, a literary conference taking place.  The narrator of the story is a writer, translator, and mad scientist.  As a mad scientist he plans to put forward a scheme to conquer the world with the clones he will create.  But first he needs the cell for his supreme leader clone.  His target donor, author Carlos Fuentes - whose short novel Vlad we will be reviewing next. 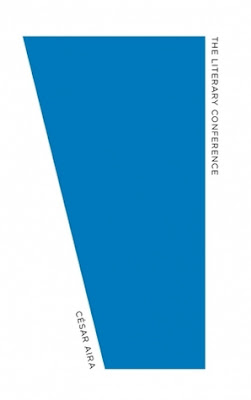 Starting with the  translator, Kathrine Silver is excellent.  As noted at an online  interview,  "Silver is a multiple award-winning translator who, in addition to wonderfully loopy Latin American novels, has worked on screenplays, plays, and a variety of non-fiction. She’s also a program director at the Banff Centre’s literary translation program..."
The author, César Aira, is a prolific Argentinian fiction writer, writer of literary studies,  and translator. He is apparently known for his avant guard styling, and within the novel here, refers to his preference for a "flight forward" approach to writing. In other words rather than back tracking and rewriting, he doubles down and fights his way through. This can lead to a little jumpiness in his narative.

Whether or not César Aira is Argentina’s greatest living writer, he’s certainly its most slippery. His novels, which number more than sixty, are famous for their brevity—few are longer than a hundred pages—and for their bizarre, unpredictable plots. In How I Became a Nun (2005) an innocent family outing climaxes with murder. The weapon? A vat of cyanide-laced strawberry ice cream. In ...Aira’s latest book to appear in English, Varamo (2002), two spinsters get caught smuggling black-market golf clubs.

It all this sounds like high-camp, but it is not.  Yes our novel features a mad scientist.  But the wording throughout our short novel here is both concise and thoughtful.  The story line is over the top, the writing is not.  There are more hidden little gems in this novel than I can count.  Some of the major themes include the situationality of both sudden inspiration and sudden wealth, love lost,  the creation of life, artistic creation, and vampirism.  From our novel, our mad scientist expounds to the readership:

Vampirism is the key to my relationship with others, the only mechanism that allows me to interact. Of course, this is metaphor. Vampires, as such, do not exist, they are merely a hook on which to hang all manner of shameful parasitism that need metaphor to come to terms with themselves.  The shape that metaphor takes in me is special, as I said.  What I need -which I suck from the other-is neither money, nor security, nor admiration, nor, in professional terms, subject matter or stories.  It is style. I have discovered that every human being, every living being in reality, in addition to everything he has to show for himself by way of material and spiritual possessions, has a style he uses to manage those possessions.  And I have learned to detect it and appropriate it.  Which has important  consequences for my relationship, at least for those I have established since I turned forty: they are temporary, they begin and end, and they are quite fleeting, more and more fleeting as I become increasingly skilled at capturing another's personal style. Any other kind of vampirism could lead to permanent relationships, for example, if I extracted money or attention from my victim, the other's reserves would likely become infinite.  Even if I were looking for stories, a single subject could supply me indefinitely.  But not style.  It has a mechanism that gets worn out in the interpersonal transfer.  Once in action, I watch my victim dry up, wilted and vacant, and I lose all interest.  Then I move on to the next one (p. 63).


It should be recalled that our mad scientist/literary narrator is looking for Carlos Fuentes, who along with many other works, is the author of Vlad, which describes the coming of Count Dracula, rather frighteningly, to prey on modern Mexico City.  Vlad was written only a few year (2004 versus 2006) before this novel.   His description of vampirism here, both describes the symbolism of Vlad the Impaler in Fuentes' novel, and also himself, Aira as author,  steeling the instant recognition of Fuentes' name and fame, by making him the target of our mad scientist.  Fuentes obviously did not mind. In La Silla del Aguila/ The Eagles Throne (2009), Fuentes has César Aira winning the Nobel Prize in 2020.
There is not too much point in telling all the details of the plot.  With only 90 pages, and a fair amount of thoughtfulness, the number of actions taken are limited.  The mad scientist with a literary bent wants to take over the world with his clones.  He knows that he is not made of the right stuff:


It was on this point that our Mad Scientist most differed from the stereotype of the Mad Scientist, who would typically dig in his heels with self-destructive resolve in order to maintain the central role of his own intellect. Ours reached the conclusion that he could only manage to take  a "leap forward"  [that phrasing again] from his current stage if he found a way to get out from the middle, if his intellect could be placed at the service of another intellect, his power at the service of another greater power...Therein lay his unparalleled originality (as far as Mad Scientists go): in recognizing that "another" idea is always more efficient than "an" idea, by mere virtue of being an-other. And an idea does not  get enriched through multiplication (clones), but rather by passing through another brain (p20).

So the Mad Scientist is willing to act as the side kick to his selected genius, the clone of Carlos Fuentes.  Both he, and Carlos Fuentes have been separately invited to a conference in the Venezuela.  So with some detours he is off to the conference to get himself a sample.
It is important to note that our Mad Scientist may be crazy, but he is not delusional, he has equipment, and strange things will eventually unfold.  That the birthing of the new clone race may have more flavors out of a (humorous) H.P. Lovecraft story simply illustrate the difficulties of extreme scientific experimentation on a shoe-string (or interpreter's) budget.

Did I enjoy the novel?  Yes very much.  It moved along fairly well.  For such a small novel, it is rather compartmentalized, so I was able to pick it up and put it down frequently on a busy weekend without loosing the thread of the story.  It reads well as both a fast, funny story, and as a slightly slower essay on a number themes, including any number of elemental topics of.

For our descriptive ratings we have Realism and Readability, rated 1 to 7, with 7 being highest.

Realism is only difficult as into which low rating to give it.  The setting is in theory the modern world, and it is not so surreal of a novel as to have no plot, but there is no real attempt to make many of the goings on particularly "realistic".  As with real real-life, reality at the edges of the random, where the dice mathematically can come up snake eyes 12-times in a row, does not seem particularly "real".  Adding one point only because of the fairly mundane setting (a literary conference), we will call it a 2.

Readability is straightforward.  Events move along quickly. Even the philosophical meditations move along quickly.  It is not quite a page turner, but it is pretty close.  The humor also helps to keep it moving.  It is the rare case of a literary novel, a novel with a fair amount of symbolism and differing levels of meaning, also being a very easy read.  It is a literary 6.
Posted by russell1200 at 5:00 AM