Evan Munday's Quarter-Life Crisis: Only the Good Die Young, is a somewhat comic post-apocalyptic graphic novel set in a devastated Toronto after some sort of cosmic event, likely caused by alien robots, has wiped out everyone who is not roughly 25 years old.  The story was clearly intended as the first in a series, although I am not aware of any latter issues..  Rather typical for the genre, it ends at a natural action point, but you wouldn't really say that all of the issues are resolved.  Note if you go to the link and click on the cover of the book displayed, there is a sample of the first 40% of the novel. 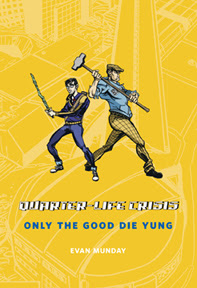 Evan Munday,  lives in Toronto,  is a publicist for Coach House Books,  a commercial illustrator of other author's works, and a writer-illustrator of comic books /graphic novels.  He is noteworthy enough to be interviewed by his local news hounds.

In "real-life" quarter-life crises refers to a (newly discovered?) crises period for young people.  My guess is that it was invented by parents who couldn't get their kids to move out of the house even before the current economic downturn.   Obviously, our twenty-five year olds (maybe 27 at time of story) have a very real and serious crises.
So what sort of crises do we have when everyone who is not 25 gone?  Toronto, per the 2011 Canadian census has 5,583,065 people.  Within the 25 to 29 age group there are 389,230 people (188, 235 men and 200,955 women).  If you take 1/5th of that group, you would have  37,647 men, and 40,901 women for 77,838 survivors. So a little over one-percent of the population has survived the immediate event.
While it is granted that 25 year olds probably make for a pretty good combination of maturity and experience to survive a lot of problematic events, having nearly 80,000 people to feed with no means of creating more food, and all of your leadership wiped out is a pretty good recipe for a lot of secondary casualties.  So if a little over 1% survived initially, it is a good guess that over half of those are now dead at the time this book starts a few years later.
The book centers around two brothers Harper and Aaron Yung, third generation (I am guessing) Chinese-Canadians.  The younger brother, Harper, our narrator, prior to the crises, lived at home, worked in a record store, while working toward becoming a science fiction novelist.  His older brother, Aaron,  was in medical school intending to be a doctor.  Something has happened to Aaron.  He no longer speaks, and on some levels is barely functional mentally, but at the same time has picked up a magical ability to control, manipulate, and create machinery.  The two brothers ride around in a trolley car, that Aaron can somehow propel.
The city is coalescing around a handful of gangs who have grabbed hold of the various large sources of food, and there is increased territorial wars.  The two brothers are one of the many small groups of independents that are getting squeezed between the warring groups.  The one wild card is the "1895s", the murderous robots that likely are somehow central to the strange death-event.  They seem to act as solo zombies scouts, creating fear and mayhem when they appear.  They are not invincible, but there are not a lot of firearms in Toronto, so most folks are helpless.
The novel starts quickly with our two brothers running into a hostile gang, that rides Vespa motor scooters, and likes to dress up in financial district garb, the Bay Streeters.


Later they go to the headquarters of the "Rogers", a larger rival gang, that treats them better, but is putting a lot of pressure on them to join with them.


I do not have any particular expertise in the  graphic novels, so I can only compare it on a stand alone basis, or in comparison with other fictional post-apocalyptic representations.

The story moves along well, but given the lack of "space", the story line is not particularly hurried.  The intention to use this novel as a setup for a continuing series provides too much deep back story, and too little immediate resolution of the story.  IMO, the author would have been better off just making it a standalone with the heroes surviving so that a sequel is possible.  As it stands, very little of the immediate drama was resolved.

The visual representation of an actual city was one of the more interesting elements.  The authors artwork is comic book realistic, rather than highly realistic.  Combined with the rather "jokey" demeanor of the characters, there is not a whole lot of tension generated regarding who lives, and who dies.  I suspect that people who are familiar with Toronto, might be better able to immerse themselves within the setting.  In net, I suspect that if you are a fan of the graphic novel presentation, or if you just want to see the ruined landmarks of Toronto, you will enjoy the series.  Otherwise, it comes across as a bit of very quickly consumed bit of light entertainment.

For our two descriptive (non-qualitative) ratings: Realism and Readability: 1 to 7 with seven being high.

Realism is intended to indicate the novels immersion into a reality that could actually happen, if not exactly to the reader, at least to people who are alive today.  With Realism, I do not  include the cause of the crises.  But the continuing effects of the crises do count, if they add a bit of surrealism to the ongoing events.  Random robots speaking gibberish to those they intend to destroy are surreal.  The gaining of "special" abilities, such as being able to power up and run mechanical devises through some intuitive machine sense are also not particularly "real".   On the other hand, gang violence and fighting over salvage are "real".  The novel swings all over the place, but the tipping point is the  comic superhero-like combat scenes: it is one point below average: a 3.

Readability is surprisingly mixed for the format.  There are a lot of unstated facts known to the characters, but unknown to the audience that do create some mystery to the proceedings, but make the story a little less straightforward.  The flashbacks, and even some of the combat scenes are little confusing.  But you have pictures, and when the action snap shots are confusing, the narration usually kicks in to save the day.  Its short length compared to a novel helps, but the deep back story flashbacks keep it from being a page turner.  Readability is one point above average: a five.