Michel Houellebecq's H.P Lovecraft: Against the World, Against Life (translation:  Dorna Khazeni; Introduction: Stephen King) is a series of critical essays on the now famous pulp horror fiction writer of the 1930s, H.P. Lovecraft, and also includes two of his works the longish short story The Call of Cthulhu, and the novella The Whisperer in Darkness. 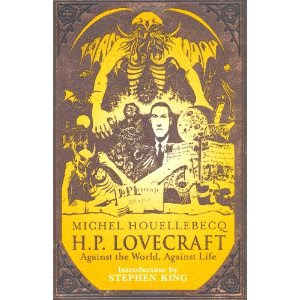 Michel Houellebecq is a famous modern French novelist.  Many of his works have been translated to English. His best selling Atomised, much like Lovecraft's work deals with the situation of modern man.  Given that Lovecraft has a number of choice adjectives thrown in his direction, it is probably fitting that an author who has been described as sex-obsessed, racist and misogynist, write a critical acclamation.

H.P. Lovecraft was a writer of pulp magazine horror stories.  Virtually unknown to the world at large, he was reasonably influential within the his own genre, both through his published fiction and the wide correspondence that he kept up with both other authors and fans.  It is estimated that he wrote somewhere in the neighborhood of 30,000 letters in his lifetime.  Some of his most notable correspondence was with Robert E. Howard, the creator of Conan the Barbarian, famous early science fiction writer, Clark Ashton Smith, and most importantly August Derleth, the writer who would tirelessly work to continue his legacy.  When H.P. died young (47) from cancer, he was penniless, but he left behind many friends.

More Victorian than the Victorians, he grew up a generation (or two, or three) too late to fit in well with the society he grew up in.  Much like many people today, he felt out of place in the newly industrialized world, that was teaming with immigrants from other lands looking to work in the new factories, lit and powered by electricity.  He is the perfect example of how upper crust families tend to slowly loose their affluence over time in modern mercantile societies.  The magic that struck in an earlier time and place for the families' founder, is dissipated over succeeding generations.  When H.P. finally left the nest, he had almost a charicature of upper middle class ideals, but not the money.

Houellebecq brings up a number of themes with regards to his writing.  I will only cover those that seem to be relevant to what made Lovecraft unique and/or apocalyptic in his style.


1.  Lovecraft's writing was science fiction based horror.  While he didn't go into the details of how the alien technology worked.  It was meant to be a potentially realistic view of mans place in the world, not supernatural or metaphysical

2.  Lovecraft essentially had an atheistic view of the world.  There was nothing out there that loves us, and what ever we did manage to find out there was likely to be inimical or indifferent to our interests.   We are no more likely to understand the greater sense of the cosmos than the butterfly making its rounds in the garden

In art there is no use in heeding the chaos of the universe; for so complete is this chaos, that no piece writ in words cou'd even so much as hint at it. I can conceive of no true image of the pattern of life and cosmic force, unless it be a jumble of mead dots arrang'd in directionless spirals (p62, from correspondence).

3.  Lovecraft's character are banal.  They don't have sex, there are no discussions of money, they tend to be single and unattached.  There personal life is not a matter of much concern,

Assailed by abominable perceptions, Lovecraft's characters function as silent, motionless, utterly powerless, paralyzed observers...They will remain glued in place while around them the nightmare begins to unravel...[Lovecraft] transform[s] perceptions of ordinary life into an infinite source of nightmares... (p69).

Not all of Lovecraft's stories threaten an apocalypse, but most of them outside of his dream sequence stories, tend to imply that there is always a horror waiting around the corner.

With regards to the included storiers, The Call of Cthulhu is, if nothing else, famous for one quote:

That is not dead which can eternal lie,

And with strange aeons even death may die.

This is one of his globe trotting tales.  A story which will eventually make its way to the South Pacific, where a sleeping giant, a mad god of sorts, is threatening to wake up, and rise from its sunken fortress.
The Whispering Darkness takes place near the famous Arkham, Massachusetts.  The small college town that is a setting for many of his stories.  In this tale a professor at the local college, interested in the universality of folk lore, see parallels between the local stories and sightings, with those of may other cultures.  As he comes to learn, there is a reason that there is a similarity.  Again, the horrific revelation is not of the demonic, but of the alien:  a cruel and bizarre alien.
There is no easy way to descriptively rate the entire body of H.P. Lovecraft's work, nor for that matter its readability across so many stories with such a variety of settings.   In general, H.P. Lovecraft's technology is too dated to appear realistic.  The mundane nature of the settings do give them a bit of dated realism.  The dream-sequence works are based on magic beliefs that most people would not subscribe to today.  Readability various a lot.  His fiction is heavily laden with adjectives and adverbs in an overwrought style that can take some getting used to.
The reason that Lovecraft is so influential today, is that stories of a hostile world, just beyond the one we see day to day, are very easy to update to a modern setting.  Each writer who adopts Lovecraft's themes and tropes, helps to revive interest in the original.  And the list of the "influenced" is extremely long.  There are concordances of Lovecraft based fiction that came out twenty years ago that were thick books then.  If they have been updated, they would probably be three times as large now.  Lovecraft's writing is pulp fiction, but considering the changes in time, technology, and culture, they hold their value well.  To the extent that today we struggle with the same issues that Lovecraft addresses, it might be said that he was prophetic.
Posted by russell1200 at 5:00 AM

Cthulu for President!
Why settle for the lesser evil?

John: Because, he is not a U.S. Citizen. LOL

What?!? I thought we had already done away with that.... Oh wait, I'm sure we can find a certificate of live birth for Cthulu in Hawaii...

Cthulhu is much older than the Hawaiian Islands. They are relative youngsters compared to him/her.

Of course Lovecraft was not aware of continental drift as that was considered a rather extreme theory, and not really accepted until the mechanism of plate teutonics was clearly demonstrated in the late 1960s. So I don't think he was aware that much of the modern world has been greatly rearanged since the time of the dinosaurs.

Oh okay, isn't there a provision for beings living here when the Constitution was adopted?

LOL- Not exactly. It revolves around what is considered a naturally born citizen.

Cthulhu was born overseas - way overseas. To the extent he may have had parents, they would not have been U.S. citizens.

Key in his/her case would be the fact that by definition (per Lovecraft) there is nothing natural about Cthulhu.

Possibly some of the Mi-Go of Yuggoth if they hatched/sprouted some young while they were hanging out in the mountains of Vermount/New Hampshire (so that they would be Mi-Go of Dartmouth?) would be eligible. Again though, I suspect they would be considered non-natural by declared definition of creator.