Dmitry Bykov's Living Souls (abridged translation: Cathy Porter) is a dystopian apocalypse-in-progress set in Russia in the near future.  The collapse is partially economic, their oil exports have lost much of their value, but is more directly caused by a bloody civil war fought between the Northern and Southern portions of the country, and brutal repression within the Northern (Moscow centered) part of the country.   After three years of warfare, both sides have exhausted themselves. 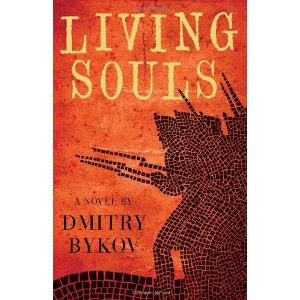 Dmitry Bykov sounds like an interesting man.  To grab some comments from some other reviewers who have gone before me:
Living Souls (Review)
Jim Murdoch,  The Truth About Lies, 20 February 2011
Nick Harkaway met Bykov in Russia (and later interviewed him in the UK) and describes him as follows:
Bykov is elemental; a huge man with a huge voice and huge passion. In Russia he’s basically a rockstar – radio host, biographer of Pasternak, novelist, poet, TV personality… he’s a kind of cross between Melvyn Bragg and Bob Geldof; a cultural force who takes delight in causing outrage to enlighten…
I can’t help but hear an echo of P G Wodehouse’s Vladimir Brusiloff in the assertion that it’s the best possible book in the world – and since Bykov reads Wodehouse, that’s not so far-fetched
Living Souls ZhD (Review)
Glas, 2006
Dmitry Bykov (born 1967) is the author of several prize-winning futuristic novels invariably inspiring heated public debates. He is also a noted poet, essayist, critic, a popular TV presenter and journalist. Bykov is the winner of the top literary prizes including the “National Bestseller” and “Big Book”.


In the near future, the world has discovered a substitute for fossil fuels, and Russia losing its one salable item to the world collapses. The novel centers around a semi-mystical struggle between three factions, the brutal traditional rulers of Russia, the Varangians, the mercantile and cosmopolitan Jews, the Khazars, and the unnamed downtrodden traditional folk. The first two fight each other tooth and nail as the country collapses into starvation and anarchy.


The story involves a number of different misfit couples who span the ethnic divide.  The very long first half involves their getting to a semi-magical village of plenty, Degunino.


The book is somewhat playing off  a famous work, Gogol's Dead Souls (1842), which is as I understand it is a satire on Russian provincial life of the time.   Flannery O’Connor is quoted in the introduction to Dead Souls :  Do you like the novel Dead Souls?  I like Tolstoy too but Gogol is necessary along with the light.


Living Souls was very controversial when it came out in 2006, and the English language translater saw fit to abridge the work, and tone down some of the content:


Bykov, half-Russian, half-Jewish, described his book as "both Russophobic and anti-Semitic", and in the preface to the Russian edition apologized to anyone whose feelings he might have hurt. The editors of the sanitized English version went further and got rid of at least half of the novel's provocative statements and offensive language, including most references to "Yids". Even the title ZhD - an abbreviation that sounds like Yid in Russian, brilliantly translated as "Jewhad" by Francis Greene - has been rendered more mildly.
The original was 685 pages.  The abridged translation is a densely written 439.


It is an interesting novel at times, but I would hesitate to call it enjoyable.  Too much time is spent on a faux-history that does not make a whole lot of sense, and with detailed settings that are eventually left behind.  The translation is more hostile to the traditional ruling class of Russia than to the Jews.  But having the first group being representative of an odd Nazi-like cult, and the second group reforming a long dead Jewish kingdom in Southern Russia makes the brutality and conflict into something  of a farce.  Given the not too distant history of the Jews, squeezed between the Nazi's and the Soviets in World War 2, and nearly exterminated, I am not sure that a satire that makes them one of the power grabbing groups is coherent enough to have any real bite.   Satire itself can be fanciful, but the subject being satirized needs to be real if it is going to be effective.  It is doubly frustrating because when you are reading a book like this you would like to get a better sense of the reality of the country.  This book is not reliable enough to make you feel comfortable with its (satirical) representations.

For our descriptive ratings - Realism and Readability - 1 to 7 with 7 being high.

It is not realistic.  It is both satirical and fanciful.  Magical happenings occur frequently as the book progresses.  It is a one.

It is also a difficult read.  It uses a lot of symbolism, and has an odd take on what would be to many non-Russians obscure historical episodes.  That I know about Varangians and Khazars almost proves that point.  Many of the peoples names sound a lot alike, and there are a lot of people to keep up with beyond the main couples.  Call it a literary 2.