Carlos Fuentes' Vlad is a dystopian novel set in modern day Mexico City with the primary agent of doom being the one and only Count Vladimir Radu (a.k.a. Vlad Tepis -Vlad the Impaler), commonly known as Count Dracula. 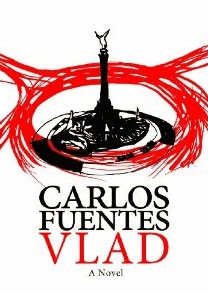 Carlos Fuentes (1928 -2012) is a famous Mexican novelist and essayist.  His first novel, Where the Air Is Clear (La región más transparente) was a success, and I gather he never really looked back.  He is so famous that it is almost pointless to try and summarize his career. Until his recent death, he was often referred to as Mexico's greatest living author (es el escritor vivo mas importante de la literatura mexicana).  Although he is noted for his socialist leanings, the Mexico City portrayed in this novel is a fairly nuanced one.  The depiction of middle class life within  a city of of 20 million people seems to be dead-on.


To summarize the storyline, I am going to get a little help from the New York Times:

My anticipation was that the book was going to be a bit of a farce, a sendup, and it did have some of those elements at first.  The Lawyer, Yves Navarro, has his beautiful wife, a realtor, find a house for an old friend of the senior partner at the law firm.  Of course, given the title of the book, we know exactly what is happening here when the client wants a large remote house backing up on a ravine, and all the windows blacked out, but of course Lawyer Navarro does not.

Very quickly there is a bit of melancholy introduced as Navarro recalls the one black spot on his otherwise ideal life: the death from drowning of his teenage son a few years ago.  The melancholy does not last.  Soon the book turns to terror, and is surprisingly creepy and frightening it is for such a short novel about such a well trod subject.  Everyone knows Count Dracula, what sort of surprises can this book hold?  Surprise!

The book addresses a number of themes,  The impermanence of life.  The inevitable fate of even the most successful people to eventually face the death of loved ones, and if they have no loved ones than you must face your own slow fade into oblivion alone.   Here Navarro (the "I") is being addressed by the senior partner at his firm, a very old man who has managed to attach him self to succeeding generations of ruling party politicians as they come and go in Mexico's six year -one term only- Presidential cycles.


"So you see Navarro, the advantage of living a long life is the opportunity to learn more than one's circumstances alone would allow"

"Circumstances?" I asked in good faith, not certain what [he] was talking about.

"Sure", he said as he brought together his long pale fingers.  "You descend from a great family; I ascend from  an unknown tribe.  You have forgotten what your ancestors knew.  I have learned  what mine never knew." (p. 17).

And we haven't even met Vlad yet.
There is another theme I struggled to pin down until I read the (oddly) related novel,  Cesar Aira's The Literary Conference, (our previous review).  Vampirism has a variety of meanings, but I was missing another word to go with it: parasite.  The vampire is a parasite.  But as this novel knows the world is full of parasites.  In economics, some people would call them rent-seekers.  They hive off value, while producing nothing of consequence themselves.  In the capitalist world, that seems almost normal, but earlier it referred to a variety of landholders, and tax collectors, whose activities seemed less geared toward the general common good.  In a world with no economic growth, the rent seeker could be seen as a parasite.
He does not beat you over the head with it, but here we get a scene where our hero (Navarro), realizing there is trouble, jumps into his BMW and drives to where he hopes he can get some answers:


I had never before been so tortured by the slowness of the Mexico City traffic; the irritability  of the drivers; the savagery of the dilapidated trucks that ought to have been banned ages ago; the sadness of begging mothers carrying children in their shawls and extending their callused hands; the awfulness of the crippled and the blind asking for alms the melancholy of the children in clown costumes trying to entertain with their painted faces and the little balls they juggled; the insolence and obscene bungling of the pot-bellied police officers leaning against their motorcycles at strategic highway entrances and exits to collect their bite-sized bribes; the insolent pathways cleared for the powerful people in their bulletproof limousines; the desperate, self-absorbed, and absent gaze of old people unsteadily crossing side streets without looking where they were going, those white-haired, nut face men and women resigned to die the same way as they lived; the giant billboards advertising an imaginary world of bras and underpants covering small swaths of perfect bodies with white skin and blond hair, high-priced shops selling luxury and enchanted vacations in promised paradises (p79-80).

And they say Germans can write some long sentences: take that Kant!


It is an excellent novel.  Short in length at 122 pages; it is a very fast read; and yet it most reminds me of the much longer Bram Stoker's Dracula for both the sense of dread, and twisted romance of gothic horror that it brings to the proceedings.  The tension mounts throughout the novel, and when we get to the last line, there is a big payoff.
We now come to our descriptive (not qualitative) ratings: realism and readability: rated 1 to 7 with seven being high.
Realism is tough.  It is set in the very real modern world, and the story interacts within a very normal, Mexican, middle class setting.  But Vlad Tepis is no phony vampire.  He is dangerous, and deadly, and very fantastical in nature.  You cannot replace Vlad with a Drug Cartel Baron and get the same story.  I am tempted to call it is a three, because it feels very real, but that is just good story telling:  it's a 2.
Readability is easy.  It is short, it is very much to the point.  It is very much a page turner at times.  There is a little bit of symbolism, and double meaning within the storyline, but nothing that keeps the story from being well delivered as a story:  a literary 6.

I am still chuckling about that one Russ!!!

Pioneer: Kant is still probably the champion example. I gather that in the original German, he has sentences that can go on for pages.

I have notice that a lot of great writers violate many of the supposed rules of good writing. The long sentence can be a very effective way to build up to a sort of punchline conclusion.

You just have to have something to say.