Set in a post-World War 3, black and white Paris, Chris Marker's La jetée is both a famous 29-minute 1962 French science fiction film that was composed almost entirely of still photos, and slightly differing companion photographic novel, La jetée ciné-roman, a collection of  photos, captioned in both French and English.  The apocalyptic movie 12Monkeys was inspired by the film. 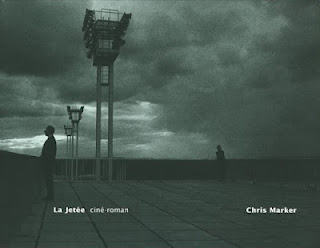 Chris Marker (1921) is a French writer, photographer, and film director.  He has has a long career, but this appears to be his most influential work outside of the French language.

As the story is told in large photographs, with very short captions, I could probably fit the entire text within the length of one of my normal reviews.  Obviously Monsieur Marker is maximizing on the concept of a picture is worth a thousand words.

The setting for the novel is the bleak underground galleries, and shelters of post-nuclear war Paris.  It is a cruel world, with a lot of fruitless experiments, often with not entirely willing subjects, directed to finding a way back to a life above ground.

The scientists have discovered a time anomaly.  They want to send a subject back in time, or possibly to a different world entirely.  If the subject can survive, possibly the rest of the survivors can follow.  Because the whole process is so unstable, they decide to send back a man who has a particular powerful memory of the past: a scene on a jetty (an airport loading dock); the jetty at Orly airport to be exact.  And thus we have the title.  The initial experiment is successful in so far as the man goes back in time to a place where people still walk around in parks, the pigeons still roost, et cetera.

But of course, if the solution was that easy, that simple you would not have much of a movie. Oddly enough for such a short length, this novel actually has a few complexities not found in the movie 12 Monkeys.  After success in the past, the attempt is made to send the man to the future, to beg for help from whatever people can be found there.  After all, if the future people, do not insure the survival of the past people, how will there be future people?  It all starts going askew there.

The whole effect of the black and white photos, and the alternating cruel, cold, or remote images reminds me a lot of the dark images from Jean Cocteau's Orpheus: this being a retelling of the Greek classic with black clad motor cycle riders. Oddly enough, I am not the only person to make this connection (completely independently), Janet Harbor in her book that focuses solely on this movie, notes that the story is to some degree a story of going back in time, and makes a less specific connection to the Orpheus tale.
Chris Marker: La Jetée
Janet Harbord, Afterall Books, London, 2009

La jetée is a story about going back.  It tells of a man whose desire is to return to the past, and as such it is a film that echoes other stories, cultural myths that are full of warning. Orpheus loses his lover through a backward glance…it echoes the (often misplaced) desire of many noir films, to go back and reconstruct the past in order to elucidate a truth about a woman.  Going back is not something that one can get away with.

Did I enjoy the book?  Yes, of course I did.  Since I liked the movie 12 Monkeys, I was predisposed to like La jetée.  The photography is wonderful.  It is a very short story, and a rather sad story, but it is a story that stays with you.
As to our descriptive ratings: Realism and Readability: 1 to 7 with 7 being high.
Realism:  hmm.  Well the guy starts in a future destroyed world living underground and then goes back and forth in time.  Nothing like this is going to happen to you or your close associates: even if a few of them happen to be French.  There are no elves or faeries: a 2.
Readability:  is almost beside the point.  It is a captioned picture book.  There are some plot twists, and it will get you thinking, but you cannot get much easier to read than this: a 7.
Posted by russell1200 at 5:00 AM

Russell - i haven't been commenting on all of the reviews but i have been reading them! i was waiting for your review of this book and was pretty sure what your review would be.

i normally hate movies that are based on books, The 13th Warrior being the ONLY exception. but oftentimes i have seen movies that i wish were then expanded in a book. 12 Monkeys is one of those.

i love reading all of your reviews and you always give me something to look up, investigate or learn more about. what a great way to learn! thanks buddy!

You can see 12 Monkeys in Jetee, and Jetee even helps explain some of what is going on in 12 Monkeys, but 12 Monkeys is a more traditional (if odd) narative.

In our review of Ashes Ashes, we had the author (if not the book) who is said to have started the concept of the time loop.

And of also of course, I even found one that (After the Silence) set in Nova Scotia.