The Decline and Fall of the British Empire: A review 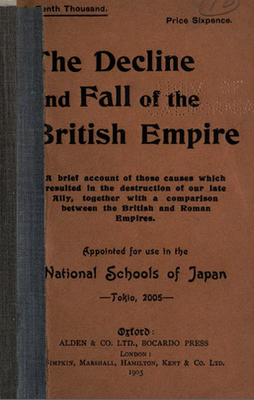 There is not much information on the author, but I did find a note that ties in his general fears of a weakening British Nation with the founding of the boy scouts as a way to invigorate the youth of the country.  Apparently Robert Baden Powell excerpted portions of the work in his Scouting For Boys. After Mills wrote this "novel" he wrote National Service and the Welfare of the Community.  National Service generally meaning the draft.  And has a list of other books (also here) on public interest issues.

Note that there had been a number of alarmist novels that preceded this one.   Enough to generate a Wikipedia entry under invasion literature.   Possibly the best known, because it was the first was The Battle of Dorking (1871):

The rich were idle and luxurious, the poor grudged the cost of defence. Politics had become a mere bidding for radical votes, and those who should have led the nation stooped rather to pander to the selfishness of the day, and humoured the popular cry which denounced those who would secure the defence of the nation by enforced arming of its manhood, as interfering with the liberties of the people.


Further writing ensued:  Louis Tracy’s The Final War (1896) and The Invaders (1901), Headon Hill’s The Spies of the Wight (1899), and Walter Wood’s The Enemy in our Midst (1903) (quote and list from pdf here)Finally we come to our novel here.  It is set up as a lesson to Japanese students about how to avoid the fate of the British Empire.  From the preface:

Any Empire, which wishes to play a notable part in the history of the World, must realize that other Empires as proudly exultant as herself have passed away. If she wishes to avoid a similar fate, her inhabitants must from childhood be acquainted with the errors of their predecessors if haply they may avoid them.


The author patterns his collapse very closely on Gibbon (1776) Decline and Fall of the Roman Empire.  Gibbon felt that the Romans fell to the barbarian invaders because of the collapse in social morals, and civic virtue in particular.  Gibbon was very harsh in condemning the early Christian Church, and viewed the Roman change in philosophy, from one of looking to ones city, to one of pacifism and looking to the world to come, as a major contributor to the collapse.  Our author here, parallels this collapse, but has updated it (in 1905 terms) to include a collapse from Christian virtues as leading to the downfall.

Much of his history makes little sense other than as a general feeling that the English of his day were growing effete.  They were living soft lives in their cities, and relied on others to provide their wherewithal.  They took holidays at the seashore, but no longer sailed on the seas.  It is a wonderful example of how the physical fitness mania, and the camping organizations, came to be seen as critical to national health.  U.S. President, Teddy Roosevelt, is his heroic ideal of a politician.  Throw in a little Social Darwinism and your all set:

‘too effete and nerve-ridden to guide the destinies of the world’, and, desperately lacking in ‘men with a genius for duty, with seasoned bodies and masterful minds, who would not permit the nation to slumber amid the deafening armament of Europe’, could not avoid its own ruin in accordance with ‘God’s law concerning the survival of the fittest’(Also from pdf here).

Interesting that survival of the fittest has become "God's Law".

The choice of a Japanese professor as the narrator is not accidental.  The Japanese were very strong British allies in 1905, and this alliance was maintained through World War 1 when the Japanese secured the German Pacific Islands so that the British could maintain their home fleet in European waters against the enlarged (since 1905) German High Seas Fleet.   Not surprisingly a book that is written from the perspective of 100 years in the future is going to miss a lot of radical changes - it was the Japanese themselves who probably did the most to collapse the British Eastern Empire holdings during World War 2.

At the time of writing, the British had just had a hard time suppressing a rebellion in South Africa (The Boer War), and the Japanese had just surprised everyone by being the first Asian Country to defeat one of the European powers in the Russo-Japanese war.  The narrator notes how the British infantryman were not able to carry their packs or shoulder their rifles for any extended period of  time.   Given the food available, and the living conditions of the British industrial class of that day, it would not be too surprising if they did have a certain amount of health problems.  But records of inductees into the Union Army during our (not very) Civil War show that the earlier rural workers were themselves often in very poor shape.  Only modern sensibilities of a bucolic past have the back breaking work of  pre-mechanical farm work as making  for good exercise.

You catch a sense of this when the pamphlet notes (p27):


Shareholders and Directors who controlled the capital of the country were satisfied if they fulfilled the meagre requirements of the law in dealing with their employees, but they cared little or nothing for their health or general well-being.

The author also puts in a little plug for home schooling (p36).

The home and note class room is the best school in which to educate an Imperial Race. The schoolmaster may do much with the raw material entrusted to him; but dealing as he must , with boys or girls en masse, he rarely finds their hearts and minds opening to him with that frank confidence which a child intuitively feels towards those who brought him into the world.

In the end it is a coalition of enemies of likely enemies (from a 1905 perspective) that brings Britain down: Germany and Russia.
It is enjoyable as a curiosity piece.  It helps to have a little background knowledge to understand some of the background to what the author is concerned with.  The copy write is long gone, so it is available in numerous online locations at no charge.

Well, it is a fictional account, so I guess we can do our usual descriptive catagories - realism and readability - 1 to 7 with 7 being high.


Realism?  It is a 1905 fictional work speculation loosely on a time period which we have already moved beyond.  I don't want to say that it is a one, because it is not completely fanciful.  His general warning that the British Empire would collapse under a future weakened condition to a coalition of enemies, in very (very) broad outline, came to pass.  But most of his "causes", did not have much bearing on the issue, and his "cures" likely would not have helped.  So we will say that as a general warning to empires it is a two.


Readability is easy.  It is sixty short pages of funny, odd notions.  The English language has not changed much in one-hundred years, so there is not a lot of problems with comprehension.  Some of the allusions to events would need a little more historical knowledge than most possess.  Call it a 5.