The End of the House of Saud 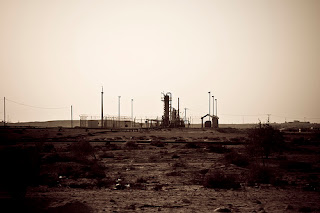 Peter Turchin (who I seem to quote a bit) had a piece from a few years ago about the high likely hood of the collapse of the Saudi Arabia.  Given that many people’s post apocalyptic scenario involves peak oil, this should be a matter of some interest.


One of the hallmarks of a mature discipline is its ability to make predictions thatcan be used to test scientific theories…
The specific case study I develop is the possible state collapse in Saudi Arabia. The theoretical setting is provided by the demographic-structural theory of state collapse. The starting point is a previously developed model for political cycles in agrarian societies with nomadic elites, loosely based on the ideas of Ibn Khaldun. I modify the model to fit the characteristics of the modern Saudi Arabian state and estimate its parameters using data from published sources. The model predicts that the sovereign debt of Saudi Arabia will reach unmanageable proportions some 5- 20 years in the future; the fiscal collapse will be followed by a state collapse in short order.
The core of the theory, as it is currently formulated (Turchin 2003: Chapter 7, following Goldstone I call it the demographic-structural theory), concerns the relationship between population growth and fiscal stability of the state. Briefly, population growth in excess of the productivity gains from the land leads to persistent inflation and rising real costs, which outstrip the ability of the state to increase tax revenues. Rapid expansion of population also results in an increased number of aspirants for elite positions, putting further fiscal strains on the state, and intensifying intra-elite competition and factionalism. Increased rural misery, urban migration, and falling real wages lead to frequent food riots and wage protests; expansion of youth cohorts contributes to the population mobilization potential; and elite competition and popular discontent fuel ideological conflicts. As all these trends intensify, the end result is state bankruptcy and consequent loss of military control; elite movements of regional and national rebellion; and a combination of elite-mobilized and popular uprisings that manifest the breakdown of central authority (Goldstone 1991:25).
Scientific Prediction in Historical Sociology: Ibn Khaldun meets Al Saud1
Peter Turchin University of Connecticut, December 11, 2003.

The primary variables appear to be:
He includes liberalization of political system: but not that it is unclear how this would change the underlying system.
What is particularly ironic is that this one scenario that exacerbates the peak oil situation, is somewhat alleviated by it as well.  Peak oil drives the higher oil prices that allow the House of Saud to stay in power. Turchin's basis for oil prices in 2003 was around $30/ barrel; a price that we have been exceeding fairly regularly since then.
Oddly enough in the same time period, and apparently independently, a Robert Baer at the Atlantic, was writing about "The Fall of the House of Saud"- go figure.
What is even odder, is that in addition to outlining lots of political cronyism on the part of American politicians, he also outlines almost exactly the same scenario (too many princes) as Turchin.
From Robert Baer’s The Fall of the House of Saud

Americans have long considered Saudi Arabia the one constant in the Arab Middle East—a source of cheap oil, political stability, and lucrative business relationships. But the country is run by an increasingly dysfunctional royal family that has been funding militant Islamic movements abroad in an attempt to protect itself from them at home. A former CIA operative argues, in an article drawn from his new book, Sleeping With the Devil, that today's Saudi Arabia can't last much longer—and the social and economic fallout of its demise could be calamitous...

The House of Saud currently has some 30,000 members. The number will be 60,000 in a generation, maybe much higher. According to reliable sources, anecdotal evidence, and the Saudi gossip machine, the royal family is obsessed with gambling, alcohol, prostitution, and parties. And the commissions and other outlays to fund their vices are constant. What would the price of oil have to be in 2025 to support even the most basic privileges—for example, free air travel anywhere in the world on Saudi, the Saudi national airline—that the Saudi royals have come to enjoy? Once the family numbers 60,000, or 100,000, will there even be a spare seat for a mere commoner who wants to fly out of Riyadh or Jidda? Reformers among the royal family talk about cutting back the perks, but that's a hard package to sell.
Saudi Arabia operates the world's most advanced welfare state, a kind of anti-Marxian non-workers' paradise. Saudis get free health care and interest-free home and business loans. College education is free within the kingdom and heavily subsidized for those who study abroad. In one of the world's driest spots water is almost free. Electricity, domestic air travel, gasoline, and telephone service are available at far below cost. Many of the kingdom's best and brightest—the most well-educated and, in theory, the best prepared for the work world—have little motivation to do any work at all...

Not all the wishing in the world will change the basic reality of the situation.
* Saudi Arabia controls the largest share of the world's oil and serves as the market regulator for the global petroleum industry.
* No country consumes more oil, and is more dependent on Saudi oil, than the United States.
* The United States and the rest of the industrialized world are therefore absolutely dependent on Saudi Arabia's oil reserves, and will be for decades to come.
* If the Saudi oil spigot is shut off, by terrorism or by political revolution, the effect on the global economy, and particularly on the economy of the United States, will be devastating.
* Saudi oil is controlled by an increasingly bankrupt, criminal, dysfunctional, and out-of-touch royal family that is hated by the people it rules and by the nations that surround its kingdom.
Signs of impending disaster are everywhere, but the House of Saud has chosen to pray that the moment of reckoning will not come soon—and the United States has chosen to look away. So nothing changes: the royal family continues to exhaust the Saudi treasury, buying more and more arms and funneling more and more "charity" money to the jihadists, all in a desperate and self-destructive effort to protect itself.