Costumed stickup men and women have delivered a twisted trick-or-treat over the last few months, pulling off a series of unrelated robberies that experts say are as rare as they have been unprofitable.

There was the robber in the "Scream" mask and the one dressed as Catwoman; the football player and Darth Vader, helmet, cape and all; and two people in gorilla suits accompanied by another dressed as a chicken.
A 15-year-old was riding his bicycle in front of a strip mall on Route 25A in Rocky Point on Long Island when he was approached by two men wearing gorilla suites and another dressed in a chicken costume. One of the gorillas punched him in the head, knocking him off his bicycle. The chicken then grabbed the bike and pedaled off with the two gorillas running behind him, police said.
Robbers Show a Creative Side, SEAN GARDINER, The Wall Street Journal link

Most criminals try to avoid standing out in the crowd.  Although masks will hide your immediate identity, the attention they bring tends to work against the perpetrator in the long run. The spectacular nature of the crime gets people talking.  There are 55 people being robbed in New York City and Long Island every day.  According to FBI statistics of the four major violent crimes (murder, rape, robbery, assault), robbery has by far the lowest closure rate:  28% versus 41% for rape and 57% for assault.
Why the unusual outfits?  Amateurs with little previous association with the crime world culture.  They are making very large efforts for often very little money.  The Gorillas and Chickens after all got away with a bicycle, and the Catwomen got $86.
The catwoman further illustrates the amature nature of these robberies.  She is reported to be Shanna Spalding, 28 years old, she is reported to be the lead singer of the death metal band “Divine Infamy”.
On the other hand she was caught when she pulled off a robbery and didn’t bring her mask. 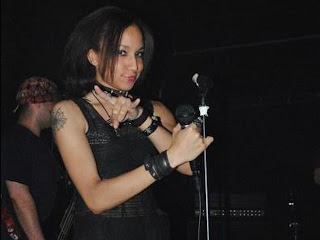 The Catwoman: Shanna Spalding
Posted by russell1200 at 5:11 AM