When you speak about a world population of 6+ billion people, it can all get rather fuzzy.  It is a big world after all.

So it may be helpful to take one illustrative example:  Shanghai in China is very quickly approaching the 20 million mark.  And understand, this is a vibrant booming metropolis.  Not  city core with enormous shanty town, periphery.

So how may people is 20 million?

A quick look at  wiki notes that the United States has two States (California and Texas) that are larger than 20 million, and one (New York) that comes close.  So Shanghai by itself would be our third largest state. 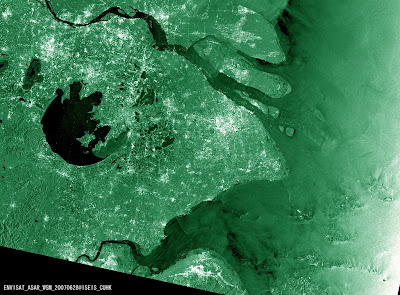 Shanghai at Night
For a very good sociological discussion of this I recommend:  Super High Density Shanghai from Understanding Society.
They note that there is a very good arguments to be made for this type of mega-city, and that it is not necessarily dysfunctional at all.
Being a blog, to some extent, of limits rather than possibilities, it goes without saying that if you maximize for efficiency, you may have some problems down the road if inefficiency are imposed on the system.
Posted by russell1200 at 4:54 AM

I can't say that I agree with you on Shanghai being a "vibrant booming metropolis". Having been there and having wandered out of the sanitized western business zones, I would posit that there is a great deal of desperation and a healthy dose of shantytown.

It reminds me of Rio, with the posh downtown and the slums where the cops will pull a westerner over and send him back to the potemkin village where the keep the westerners safe. It is the same thing in Shanghai and Beijing

China has an internal passport system. So you can be Chinese and be an illegal immigrant within the borders of China.

In general these policies are to keep the desperately poor from completely abandoning the countryside, so the general restrictions attempt to limit (amazing as that may sound when you have 20+ MM cities) the size and sprawl.

The Chinese have gone so far as to establish ghettos within the cities, where the rural folk are allowed to live. They have very limited ways of going in and out of these enclaves. An obvious attempt to keep control over the migrant population.

So even with all that the cities are becoming a sprawl of shantytowns? Wow!

As a side note: China seems like it is on a course to explode. The main difference between China and the Japanese, and us, is that the central government seems to see it coming, and has tried measures to slow up the train. But China is not a monolithic entity and many of the constituent parts are working against them.