The Story of First Survivalist's In-laws

IMO, pilgrims, if you replace the biker gangs with Indians, we are pretty much in the same situation that many survivalists see themselves in.  Of course the Indians eventually become much more dangerous than the typical portrayal of a biker gang: but more on that later.

Many survivalist fiction tales  have the heros hoed up in their little retreat finding supplies, fending off biker gangs,etc. What really happens?   The In-laws show up!
So we have here the actural true story of:
The Story of The First Survivalists In-laws
﻿


In June, to the great annoyance of the Pilgrims, two vessels came into the harbor of Plymouth, bringing sixty wild and rude adventurers, who, neither fearing God nor regarding man, had come to the New World to seek their fortunes. They were an idle and dissolute set, greedy for gain, and ripe for any deeds of dishonesty or violence. They had made but poor provision for their voyage, and were almost starved. The Pilgrims received them kindly, and gave them shelter and food; and yet the ungrateful wretches stole their corn, wasted their substance, and secretly reviled their habits of sobriety and devotion.

Nearly all the summer these unprincipled adventurers intruded upon the hospitality of the Pilgrims. In the autumn, these men, sixty in number, went to a place which they had selected in Massachusetts Bay, then called Wessagusset, now the town of Weymouth, which they had selected for their residence. They left their sick behind them, to be nursed by those Christian Pilgrims whose piety had excited their ribald abuse.

First interlude:  They run out of food. Captain MilesvStandis, a rather brave, wild, and un-pilgrim-like figure  manages after some difficulties to deliver supplies to them.


But these lawless adventurers were as improvident as they were vicious and idle. By the month of February they were again destitute and starving. They had borrowed all they could, and had stolen all they could, and were now in a state of extreme misery, many of them having already perished from exposure and want. The Indians hated them and despised them. Conspiracies were formed to kill them all, and many Indians, scattered here and there, were in favor of destroying all the white men. They foresaw that civilized and savage life could not abide side by side. The latter part of February the Weymouth people send [another] letter to Plymouth…They had become so helpless and degraded that the Indians seem actually to have made slaves of them, compelling them to perform the most menial services.
The letter contained the following dolorous complaints:

"The boldness of the Indians increases abundantly, insomuch that the victuals we get they will take out of our pots and eat it before our faces. If we try to prevent them, they will hold a knife at our breasts. To satisfy them, we have been compelled to hang one of our company. We have sold our clothes for corn, and are ready to starve, both with cold and hunger also, because we can not endure to get victuals by reason of our nakedness."

Captain Standish is not someone to mess with.  He shows up, and when an Indian get carelessly impudent, her runs the Indian through with his sword.  The Indians, not taking undue umbrage over a straight up fair fight, decide that everything is still all right between them and the pilgrims.


The Weymouth men, thus extricated from peril, were afraid to remain there any longer, though Captain Standish told them that he should not hesitate to stay with one half their number. Still they persisted in leaving…to go to Monhegan, an island near the mouth of the Kennebec River, where many English ships came annually to fish…. He then returned to Plymouth, and all were rejoiced that the country was delivered from such a set of vagabonds.﻿ 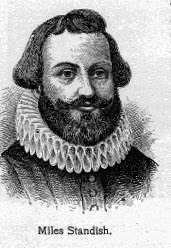