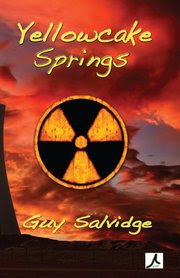 We discussed Mr. Salvidge’s background earlier when we reviewed his Kingdom of Four Rivers (now released for Amazon Kindle) earlier, so we will simply cut it short and say that he lives with his young family in Western Australia where he teaches High School.
The tone of the book is very close to the earlier cyberpunk novels without the glamour of the high tech wiz-bang gadgets of highly paid assassins or computer hackers.  The gadgetry is replaced with somber mix of overpopulation, economic decay, and environmental erosion.  There is technical progress in evident, but its effects are muted within the overarching solemn background.
Yellowcake Springs is a privately owned nuclear facility.  The Japanese Corporate menace of the cyberpunk era has been replaced by a Chinese Corporate menace of today.  The Chinese have made a deal with Australia to rule this little corner of their continent under their own laws.  Both countries have a lot of problems and, when so many are dying in the streets, neither is very willing to rock the boat to worry about individual rights .
There are four threads  within the book that struck me in particular.
Economic collapse, presumably through over population and the consequential environmental decay, have made much of the Australian countryside a no-man’s land.  Although the countryside is depicted as a brutal place, the actual tone of the action does not seem to quite live up to the potential horror.   It is interesting, but even though there are some similarities, you don’t have the sense of desperation present in say McCarthy’s The Road or Theroux’s Far North.  I think this is unfortunate because this makes Rion, a young man born to the wastelands, a less sympathetic character then he might be otherwise.  He is part of a bandit gang early in the novel, but both his participation, and the way that he participates, give an odd detachment to the character.  The book is trying very hard to indicate that the split between the people who have choices, and those who have none, is widening.  It states it, and comes very close to making you feel it.
Another major theme is increasing corporate control over the workplace.  If today’s corporations use key word checkers to sort through resumes, and type stroke counters to measure productivity, then the corporations of the future are working very hard toward direct mind control.  With the economy under so much stress, the cost of failure for the worker is also very high.  As one of the Chinese bosses notes, if he fails, he is going to be going to the work gangs, and he is too old to survive that.
The final global issue is overpopulation and environmental degradation.   With the planet having about 9 billion people at the time the story is taking place, the countries of the world are starting to run out of options.   The desperation is enough that some self be-knighted folk are willing to wipe out a considerable number of people to slow or end what they view (plausibly) as the destruction of the world.
The last issue, in my mind one of the more interesting ones, is the issue of culture and survival.  The remaining middle class spends its time in an artificial dream state (a more fanciful version of a Star Trek holo-deck if you will).  If many of us live in a world of video games, digital on demand movies, twitter and chat rooms, they are simply pushing the envelope farther.  It is fairly obvious that people will choose to live as slaves in ease, than free men with discomfort.  At some level many of us already make that choice today.  Yellowcake Springs is an oversized barely disguised work camp.  And its citizens are just fine with that so long as the air-conditioning is turned on.  As a newly incoming Chinese worker notes:
There were fences, barriers and walls.  But what enemy could there be out here, in the middle of nowhere?
However, it is obvious that the survival skills of these people are minimal.  Rion the child of the wastelands, who is anything but a sharp-actor, is better at quick footed survival then they are.  When trouble occurs, it is an adventure for one of the middle class figures to walk 12 miles to the nearest town.  When she is picked up almost immediately by the police, she is rather relieved, as she clearly little idea of what to do with herself.  The reaction of Rion to the these troubles is revealing:

Rion saw each of these trials as rituals….  If they were dejected, than he was elated; where they saw their lives being taken away from them, he saw his own being handed to him for the first time.

In other words, he views the shaking up of the status quo as an opportunity.
In the end Yellowcake Springs is an interesting book.   It moves a little slowly in some of the middle portions so for readablity I  would rate it a 6 on a ‘1 to 7” scale (7 being best- see here for comparison to earlier reviewed books).  On the grittiness scale I am going to say it is also around a “6”, not completely real in its effect, but very high for a book that is written as science fiction.
What gives this book it “twist” is an element of greater horror.  If H.P. Lovecraft had the horror of human insignificance in an uncaring cosmos, and Ervin Sims’ End of The Age (review coming shortly) would highlight a cosmic origin and ending to history where humans have only token influence,  this book seems to hammer home how vulnerable and ineffectual humans can be when the tide (or tidal wave) of demographics washes over them.
Posted by russell1200 at 5:00 AM

Thanks for the review! I'm glad that you liked the book and that it raised some interesting issues. Your criticism of the tone of the badlands environment, and Rion's movement through it, is a good one. I'm going to be writing a sequel and I hope to make it grittier in this regard. Unfortunately (or fortunately, depending on how you look at it), my life thus far has been more like Sylvia's than Rion's, so depicting the grim reality of these badlands is a challenge. The book definitely doesn't approach the hyper-realism of The Road - I can agree with that. But thanks again :)

Hopefully you will get some interest on this side of the (really big) pond. Australian fiction can be hard to get hold of over here.

Grittiness/Realism is not intended as a "per se" qualitive indicator unless that is specifically intended. However, some genres are much easier to work if they have a high realism level: horror, and action-thriller in particular come to mind.

Science fiction tropes and stylistic sensiblities tend to inhibit grittiness. Even in a dystopian setting, the technology gets in the way of reality. Gibson's style is more like an espionage novel; which is probably why he doesn't seem to have this problem.

Scarrow writes in an action-thriller style. In his case I would say that it is the immediacy and speed that gets him over the hurdle of realism.

Nova in his Gardener Summer combines extremely dysfuntional characters with the "knowing detail" to pull it off. You would almost think he is writing it from his cot in the homeless shelter. But he is uneven. His action scenes are all western shootups.

At times Paolo Bacigalupi in the Wind Up Girl seems to be trying to substitute graphic perversity for tonal quality: it is the only real failing of a very good book IMO.

I think the key, is the knowing detail. For instance Rion finds "a pistol". But Ryan has been around a violent gang for a while. So to him it would be: "another Spanish Glock knockoff. But it had the extended mag and if you held the trigger down it just kept on firing. Thiry rounds in 5 seconds tends to get your attention in a hurry. Which may have been our dead hero's problem."

Guy was too kind to mention that you mangled his last name. (Hint: it's on the book cover.)

Thanks! I went back to my review of his earlier book and noticed that I got it right two out of three times: I am regressing.