Rubber Shock! Would we bounce back?

Charles C. Mann wrote 1491: New Revelations of the Americas Before Columbus, and now 1493: Uncovering the New World Columbus Created. I have both books, and have read and enjoyed greatly the first of them.


Razib Kahn, of Gene Expression, did a ten question interview with him that is recommended. Number 6 in particular was enlightening and relevant to us here.


[Question Number] 6 – The sections on rubber were fascinating and shocking. Fascinating because I had not considered in detail how much of our industrial system depends on natural rubber. Shocking because I was not aware of the vulnerability of the rubber monocultures of Southeast Asia to pathogens from South America due to globalization. Have you considered writing a short science fiction story set in a near future with massive shortage of natural rubber? What would be the biggest changes in such a scenario?

Response: An apocalyptic science-fiction story set off by a rubber-tree epidemic? I can envision J.G. Ballard turning over this idea in his mind and saying…. Naaaah. Since he had impeccable taste in this sort of thing, I’ll stick with his judgment.

But that doesn’t mean that such an epidemic wouldn’t be a huge problem. Thanks to just-in-time manufacturing, companies no longer carry large stockpiles of raw ingredients. I don’t know the normal lifetime of, say, airplane tires (100% natural rubber), but I’d guess that we’d begin to run out of them fairly quickly—in weeks, perhaps. A world with a sudden limit on air travel would be tremendously different from the one we live in now. And that’s only one example.

Realistically, what would happen after a rubber collapse is that industry would begin to synthesize high-quality rubber. Right now nobody does this because it’s too expensive, especially given that trees do it for next to nothing. But when the trees go, factories will step in. It will take years to build the factories, and there will be major economic shocks along the way (hope they don’t occur in the middle of a downturn like the one we have now!), but eventually a substitute would be available.

Meanwhile, the environmental effects would ripple outward. Right now, rubber monoculture covers an area about the size of Great Britain in SE Asia. I can’t even begin to imagine what would happen ecologically if blight killed all those trees in a short period of time, as happened when Henry Ford tried to create a huge rubber plantation in the lower Amazon in the 1930s. In the next few years, the rotting trees would send a big pulse of CO2 into the air. But who knows what would replace them. Nor do I know what would happen if the tens of thousands of workers on those plantations suddenly lost their jobs.

The book has a lengthy section on the development of rubber.  Although I associated rubber production with King Leopold's Congo, and Conrad’s Heart of Darkness, Thailand, Indonesia, Malaysia, and now China are primary producers.   It is not harvested heavily in Brazil where the primary commercial plant came from because of leaf blight and natural predators.  The majority (~60%) of rubber is produced synthetically using petroleum.


The book notes that Asian rubber trees come from a very few varieties and are generally propagated by grafting from the wood of high-yielding specimens.


Because trees are grafted from the wood of high-yielding specimens, the great majority of the rubber trees in Southeast Asia are clones.  And the majority of the trees used to create those clones descended from the few sprouts that survived from Henry Wickham’s original expedition-a slice of a slice of a slice…. As the area of rubber increases, it becomes an increasingly inviting target for pests. “That’s the lesson of biology,” Tang said. “Diseases always come in. Sooner or later, they find a way.”


For a century, isolation-the isolation of Southeast Asia from Brazil, of Southeast Asians from each other-has spared the rubber plantations.  But the world is knitting itself together ever more closely.  There are still no direct flights between Amazonia and Southeast Asia, but they will come. And in April 2008the governments of Cambodia, China, Laos, Myanmar (Burma), and Thailand opened a brand-new highway that for the first time links all of these nations and connects them to Malaysia and Singapore…. 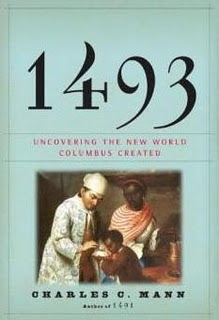