I Sniper: A Review

Stephen Hunter's I Sniper is an action thriller- a "Bobby Lee Swagger" novel. 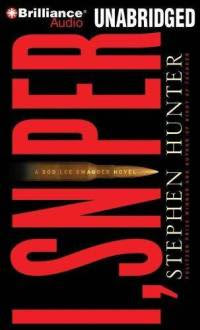 Stephen Hunter is a film critic turned author, and a defender of Second Amendment issues.  For a recorded interview at National Review Online.
I read this book somewhat for the same reasons I read Louis L ‘Amour’s The Burning Hills: To try out a something from a related genre as test of relevance and interest.
It is set in the Fox News version of reality where conservatives, the police, and marines are good, liberals and lobbyists are bad, and there is little in between.  Bobby Lee is an ex-Vietnam veteran marine sniper who later went on to some sort of secret spy mumbo-jumbo career -often alluded to - but is now retired.  At 63 he is getting a bit long in the tooth for the hero of an action adventure.  But the net result of his age is that he can complain about his aching bones while he goes toe-to-toe in violent confrontations with people decades younger than him.  His recovery time is extended from the usual 3 minutes for an action hero to maybe 30 minutes.
The book has some pretty bad people, but lacks the grittiness and confusion to make it seem particularly real:  or at least street-level real.  That the author gets cute at the polemic level, and makes two of the characters disguised versions of Jane Fonda and Ted Turner does not help.  A younger audience, if they even know who they are, is not likely to know they were married at one time.  In what little description we get of the Ms. Fonda stand-in, we are referred to her Hanoi exploits, but the author appears to unaware of more sympathetic parts of her story:  her mother killed herself by cutting her own throat when young Jane was 12, and that since 2000, she has been a fervent Christian.