End of The Age: a Review

Ervin Sim's End of The Age is post apocalyptic fiction in the literal sense.  The Lord Emanuel is on the earth ruling his kingdom. 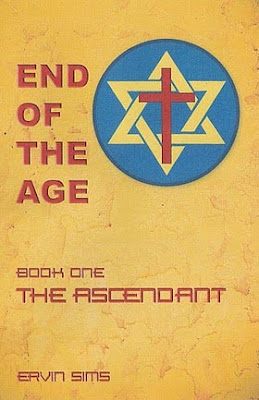 Ervin Sim's teaches Gaston College near Charlotte, North Carolina, and at Lee University. This is first novel, and while it is intended to stand on its own merits, there are two sequels planned. I should note here, that while I have not seen him in many years, we knew each other almost thirty years ago when I lived near Charlotte, NC. We were both much younger then, but the author was always a very considerate, devote, and thoughtful person. When I came across his book at Amazon, I did get back in touch with him via e-mail.

The book takes place after the return of God (The Lord Emanuel) to earth. It is intended as a serious exploration of what a world would be like within the context of the New Kingdom of God on Earth.  The plot, as such, is philosophy-driven rather then action-driven.

Before we get too far into the woods, we probably need to explain which "version" of the end times the author ascribes to. Even within groups insisting on strict fundamentalism in the protestant fashion, there are variations. Within the novel itself, there are comments to the effect that it is very difficult to know when to set the end-of-the-world-as-we-know-it timeline, as it is not always clear, even when exact durations are provided, what the intended starting point for the count-down is.

The end of times scenario here is roughly described as pre-millennial dispensationalist with a strong Calvinist (pre-destination) streak. The "pre-millennial" refers to idea that our current world-phase will end (Jesus returns) before the Kingdom of God is (re-)introduced into the world. The dispensationalism refers to the concept that during differing times on earth Gods relationship to his people has changed. How these different dispensations are broken up varies considerably. But at a minimum you will have the age before Christ, the time that Christ was on Earth, and a Church Age (which we are in now), and then some form of cosmic wrap-up. The Calvinism, not entirely obvious in the novel, refers to the concept that an all-knowing God, knows exactly how things are going to turn out in the end: who will be saved, and who will not being of particular importance. As the main character late in the book addresses a prayer to "Lord, you who determined the history of the Universe before it ever began," the Calvinism is strongly implied if not overly discussed.

The Premillenial view is not a new one, but it began to take a different form in the decade after the American Civil War (1870s). Prior to the war both pre- and post- millenniasts tended to agree that history was part of a cosmic struggle, and that current events were a manifestation of biblical prophecy. They just argued if Jesus was coming before or after the millennium. After the war, as modernism became much more a part of the American landscape there was a gradual split in viewpoints. The post-millenniasts (the dominant view) began to deemphasize the cosmic nature history, and began to look at history as driven by men. The pre-millenniasts went in the other direction and came to believe in a Kingdom of Christ that was supernatural in origin and discontinuous with the history of our (Church) era.

Premillenniasm became much more accepted after the horrors of World War 1, made it much easier to believe that it would take an entirely cosmic change to bring about a Kingdom of God on earth. Within the common culture of Christianity today you tend to get a mash-up of both views- a man driven history, with a supernatural end point.

The predestination part of the scheme tends to be important in the various detailed schemes of the end. Since these are not addressed in any clear cut fashion in the novel, I don't think we need to stir up that hornets’ nest. The 19th century theologians who started the modern dispensationalist movement were ardent Calvinists, and thus predestination is worked into the doctrine.
The story is that of a young man Paul Watanabe, who is going off to Purdue University to study history. In his world, the earlier Saints (C.S. Lewis for example) are around in the flesh. They are the upper echelon rulers of the world under the direction of The Lord Emanuel. In effect, you have a theocratic dictatorship that stringently enforces the moral and political rules over the various countries of the world.

One of the central tensions of the book that is well explored is the tension between God as Savoir and Spiritual Leader, and God as Ruler on Earth. It is fairly clear within the context of the novel, that The Lord Emanuel is doing a better job of taking charge of world management than has been historically been the case with human leadership in charge. Many are willing to concede his earthly role, truthfully they have little choice in the matter, but that does not necessarily lead to acceptance of his spiritual role.

There is another question that the in-depth future planning of the students brings up: "What does all this mean?" The college student’s life-choices seem to be affected more by the march technological of progress and extended lifespan than by the physical presence of God on Earth. Because you are in a theocracy, your student-bible study type groups are of course going to be much more popular. But the physical presence of The Lord Emmanuel does not seem to give much more direction than to obey those moral strictures that are presented in the Bible as understood by early 21st century novelists of Christian persuasion.  In other words, Emmanuel is not having daily personal conversations with his flock.  They are talking about building starships, but it is very unclear why anyone would bother. Where are they going? Why can't they just get an Angel to take them where they want to go?

The author has made an effort to make the book the "accessible" and readable by the general public. Up to a point he is successful. The language, presumably intentionally stilted to represent a different sensibility from today's loose vernacular, tends to get a little wearisome.

“Great, Dad, I’m ready for classes to start Monday, I’ve already got my texts and I’ve skimmed some through them all, but I must confess the history text got most of my attention.  I’ve never paid that much attention to the early ancients before but some of it is rather interesting.  I’m sure I’ll enjoy it.”
There are other points that some might not find very inclusive;  I doubt too many Mormons picking up the book are going to see much humor in a somewhat hedonistic character named Joseph Smith. The only people specifically mentioned as being among the revived saints are either Christian or Jewish.

One of the characters is studying biology. The cursory comments about the errors modern evolutionary theory seem addressed toward a simplistic understanding of the subject circa a 1050s high school text book. The intricacies, and confusion, of the actual subject, particularly as the research continues to march on is putting the biblical literalists deeper and deeper into a hole, To my mind, enthusiasm for exactitude is not one of the stronger points of modern christianity.  Turning a message of spirtuality into an argument on biology draws the focus away from its intent.

I would say the book is about half-way to being "accessible." It does not go too much into what does or does not involve proper belief in our (versus the book’s) age. If there is a comfort zone within the book, it is that the story is almost too similar to what a coming of age story would be today for a group of upper middle class devout students at DePaul might experience.

The novel raises interesting philosophical points. Most of the discussion is at a level, where even someone who is not a particularly "deep" reader of texts, will pick up the point. It is certainly set within an unusual time frame. I am not sure how "comforting" most people will find the novel.  The described reign of the Lord Emmanuel with its totalitarian theocracy is not an entirely comforting one.

Setting aside the scenario outlined in the novel for a moment, in my opinion (at least for today), both the prophecies of Daniel and Revelations were directed at the rulers and empires of their respective age. Since both of Empires did "blow up", the prophecies at least in a very general sense can be argued to have already taken place. I also think that most of the biblical writers were more inclined toward a post millennialist understanding of the universe. However, as I generally believe that we are likely to blow ourselves up in some fashion eventually, at which point God will pick up the pieces as he so chooses, I am of the opinion that the pre-millenniast persuasion is the more persuasive one of the moment.
Which brings us to the point of why reading this book is worthwhile.  Reading through the various end-of-times literature is often excessively boring, or excessively turgid (some might say vindictive).  Given that the human effect on a pre-destined history is minimal, it is curious that some of them are written at all.
Granted it is highlighting a particular scenario, it is not a useless exercise to think through what a literal interpretation of the biblical end of times scenarios might mean in literal terms in the modern world.  Even if they are not one’s own particular or exact beliefs, it is helpful to visualize the theories in more concrete terms.
Posted by russell1200 at 5:00 AM