Afterlight by Alex Scarrow (not to be confused Elle Jasper's book of the same name) is the sequel to his earlier Last Light which we reviewed earlier. In our review roundup, we gave Last Light the highest marks for reality of tone, and readability. 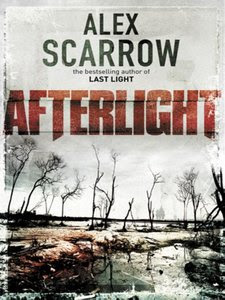 Most of Afterlight takes place ten years after the conspiracy related peak oil collapse of the first book.  There is some back dating to cover another group of survivors in London, whose fate will eventually intertwine with the Sunderland family that we met in the Last Light..
The Sunderland family is camped out with a group of fellow survivors on an oil rig just off the coast in the North Sea. I am curious if the author got the idea from the various characters using the offshore fortifications and radar towers left over from World War 2. In fact one of the Maunsell Fortifications in the North Sea has squatters claiming to be an independent nation.
Scarrow works very hard to avoid putting his book in the cozy category that we discussed extensively before. It is not a bucolic pastoral life style.
Leona is explaining to a sympathetic friend how she is thinking of just giving in:

"I guess I'm all done in , tired of the struggle. It just goes on and on and all you get every day for the hours of effort is enough food and water to keep you going for another day. That's not life. That's just_"

"Actually, it is. It's what life has been for more than half a billion years. The basic struggle to find enough protein to last another day."

The villain is a very interesting character. He illustrates well the very fine line between heroism and villainy. On the plus side, he makes very difficult decisions as a government administrator early on, that allows for a very small number of people within London to survive. But then uses this one point of very hard edged realism as a jumping off point to true villainy.   Because he started with  the largest pile of supplies, his the last of the large group of predatory looters.   The chooses he uses to take control take him down a path that causes him to wait far too long to try and set up a sustainable situation.  When he realizes his plight, he finds that he has himself trapped with very limited possibilities.  He is good at accomplishing violence, and even a little coercion, but not much else,

Here the villain ponders his circumstances.

What moronic government pencil-necks had thought the global oil crash would be nothing more than a three-month-long economic crises that could be more than catered for by setting up a couple of dozen over-sized soup kitchens.

So obvious now...Of course, armed with hindsight, he admitted that the old world had been heading towards something like that; an end-of-times-event. Not just a twelve-week-f___ing crises, but The End. He remembered an economist once calling it "Petri dish economics"- where a bacteria feeds on a growth solution, expanding to fill its grow space and finally, upon consuming the last of the free food, it turns on itself.

He looked back at the pale faces of the workers, gathering in ever larger numbers on the receding quayside, and realized all he's achieved these last ten years was to duplicate the old world on a much smaller scale; a twenty acre Petri dish.

Pretty deep thinking for an apocalypse-in-progress villain.
The author gives short shrift to the British version of survivalists who think they are going to live out the disaster in some very cozy glen in Wales. He notes that without weapons, people are simply going to plunder what they come across.
With respect to the history we have on the matter, he appears to be correct in this summation: particularly in such a densely populated country as Great Britain. In both the Greek Dark Ages, and the Dark Ages that preceded the Medieval period, survivors hid away in tiny little hamlets that raiders could not get to.
Britian today is about as poorly prepared for an economic-oil collapse as first-world western country can be. The North Sea oil is dwindling rapidly.  Britain has very few actual food and fuel resources on hand, and very few people who actually know how to grow anything. A collapse their has the possibility of being both very dramatic and very fast.  As the book notes, if you can hold on for a relatively short period (5 years of hell) most of the bad guys will have starved. In fact, in his scenario the better prepared governments of the Germans and French actually do worse in the long run.  By being better organized, they keep more people alive longer, and thus eat into their reserves.   When the situation becomes one of years, rather than months, the collapse is more complete.
Within the novel, there is also the concession  that a few countries may be able to hang on a little bit. Something the character find out via someone with a shortwave radio. Some parts of the U.S. still have access to both oil and refineries.  Some areas in the South are barely holding on.  Other section are in ruins:  the area from the Mid-Atlantic to the Northeast being noted as being as  bad as Europe. Cuba, which has already an oil collapse and very rigid government control, appear to be viable concern.  If you are going to fall out of a building, there are advantages to being in the basement.
I gave First Light marks of 7 (highest) for reality of tone, and readibility.  I would do the same for Afterlight.  In fact, without the first book's overplayed conspiracy theory, I enjoyed the second one more.   The novel actually plays very true to a number of collapse scenerios that would cause a severe disruption in the supply chain.  I  highly recommend it.
Posted by russell1200 at 5:00 AM