Kurt Cobb's Prelude is billed a peak oil novel.  I would say it is a modern espionage thriller involving peak oil. 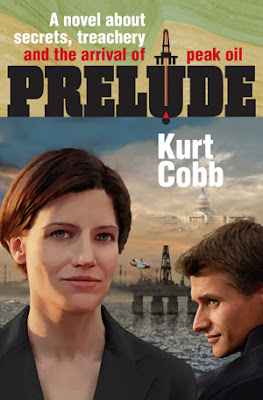 Kurt Cobb writes and speaks on peak oil.  He maintains the blog Resource Insights where he averages just slightly over one post a week.
I will admit I was a little bit disappointed with the novel because I was expecting some "collapsing action."  What you really have is people worrying about collapsing action.  If this was a cold war espionage, it would about the spy's getting information about the warheads, rather then what happens when the warheads go off.
Cassie Young works as an investment analyst for a firm that advises on the oil industry.  She starts off being sceptical of individual claims that the energy industry uses to tout its future prospects, and eventually becomes sceptical of the whole facade.
The espionage comes into play when she gets suspicious of some of the people at her firm, who appear to be secretly on the Saudi payroll, and begins digging into their activities, and their computer data bases.  She meets Victor, a Russian musician - retire hedge fund operator, who is very suspicious of the oil industry claims.
The introduction of this character almost make you feel like Orlov is making a cameo appearance: except I don't think Dmitry Orlov (video) is that wealthy.
Some of the spying activity is fairly well done.  There is a reasonable amount of tension throughout the book.
At about 2/3rds of the way through, the book begins to pick up the intensity of paranoia.  The protagonist, Cassie, is starting to wonder if she is being followed, and is worried that people are onto her suspicions.
Victor, her Russian friend, of all people seems to think she is over reacting.  He tells her, “You see, there again, you are frightening yourself for no reason.”  Which is ridiculous, but exactly the type of thing people say to make themselves feel better in the face of possible threats.  It has the advantage in helping you from “freezing” or “locking-up” in fear.  But it also allows you to continue in risky situations when alternative courses of action should be taken.
Of course, as this is a novel, her fears are eventually shown to be justified.  I will give credit to the novel in that for once they don't have the armature gaining amazing combat abilities and besting seasoned and prepared professionals.
About 1/10th of the book is glossary and research data on peak oil.  It is reasonably well done, but does seem a little like padding to lengthen a novella into a novel.
The book is a reasonable primer on peak oil issues.  It is not all encompassing, but seems to hit most of the main points.  It works fairly well as a modern business orientated spy thriller.  If you wanted to learn a little about the fossil fuel industry within the confines of a espionage novel, it would certainly be the route to go.