The Raggedy Edge: a review.

The Raggedy Edge is an almost near future, apocalyptic novel by Michael Turnlund.

The Author (info primarily from Amazon)

Michael S. Turnlund was born in Crookston, Minnesota, and raised in both Minnesota and Oregon. He resides in North Idaho where he is a teacher at the local high school.  An avid outdoorsman, he enjoys everything from birding to sailing and hunting to gardening. He has been married to Robbie for longer than he can remember and has three grown sons and one, very beautiful, granddaughter.
Apparently he is particularly into bird watching: publishing articles and coming out with a book recently.  He is on record as saying that the common house sparrow will outlast us all at the time of the apocalypse.  We have house sparrows, around here but I have never seen them take over a feeder.  Carolina birds must be tougher than the frozen northern sort.  Maybe they need to bring in some penguins to police the place.
.................
The Novel

Even to the point of being set in the same part of the country, this novel is a slightly happier, more cheerful, younger brother to the current big dog of dystopian future apocalyptic yarns:  Patriots.  Like Patriot the book belongs within the militia subcategory of post-apocalyptic fiction.  The fictional town of Purcell (likely modeled around Sandpoint, ID)  is in northern mountainous parts of Idaho about 40 miles north of  Palouse Hills region of Idaho.    Unlike patriots, none of the characters were interested in long term preparation, so it is more of an accidental survivalist than survivalist tone.
Set in a dystopian near future somewhere around 2025-2035, far enough out in time to make all sorts of odd speculations possible.  The fictional Purnell, ID is logging-farming area whose economy has collapsed except for an influx of retirees presumably looking for a low price version of Colorado.  The area is a bit of a rail hub, but the town is not one of the stopping points.  Gasoline is expensive, and people are using a lot of wood to heat there homes. Presumably not everyone as the U.S. has only about 4 years of potential wood fuel before we turned ourselves into Easter Island.  At the start of the novel, there have been a number of concerted terrorist attacks using hard to detect explosives that have shaken up the governing structure of the country.   United States economy has suffered a collapse back to a lower level, but not "The Collapse".
There has also been a cultural shift toward a pantheistic panglossian new-age religion.  Fortunately, it is a new age religion with a bite.  They like to bump of people that don’t agree with their all inclusive doctrinal points.  Given that we haven't had an aggressive pantheistic religion since the Romans threw Christians to the lions, it is an odd group to have as your dastardly deacons of doom.  That their doctrine seems closest to modern Unitarianism reinforces that perception. But thank god they are nasty, because without them you don't have much of  a story.
One area where the author works hard is to develop the characters.  He moves around the stories point of view more than necessary, and never stops with the lengthy introspective musings of his characters: ever.  The Christmas scene is dragged out to such a lengthy maudlin point, that when it is over you can only be thankful that the characters are not Jewish and thus have only the one day of Christmas versus eight days of Hanukkah.

At times the interior musings remind me a bit of Bridges of Madison County, but without the sexual tension.  And of course, if a collapse occures in Madison County just think who you would have fighting off the ApaKyKliptic New Agers: 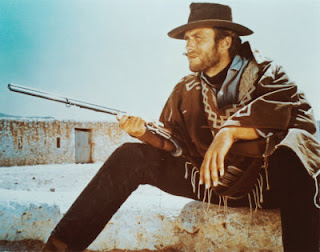 However, what we have as primary characters are one of the small town’s police officers, and a semi-retired minister that lives in a tiny hamlet just outside of the "big town".  So we don't have Clint , but as a big plus we don’t have the cardboard warriors of Patriots either.
Excepting its intentionality, the setup for our apocalypse is fairly straightforward.  Power and services go out, and everyone starts to run out of food.  Given that the we are seeing things through the eyes of a small town police officer, we get a uneven view of the problem. He makes a big mention of teenage girls doing soft-core prancing for young lads driving by their home (I guess they can’t text pictures?), but only noticing in passing the looting of the grocery store.  One interesting note, is that everyone in the small town tries to escape to the big city under the assumption that there will be more resources there.  In this case it is the big cities that shut their doors to the new comers.
Eventually our police officer, with a few fairly stock encounters with random roughnecks along the way, escapes to a hunting lodge in the mountains about 20 miles from town, meeting up the retired pastor.  Everyone gets along famously.  They run into another local group, but after some misunderstandings involving a lot of book space, but very little plot movement, everyone gets along famously.  There are no discussions of how long they can expect their centrally stored food supplies can last and no arguing over its distribution.
In their little hideaway hamlet,  the older folks mostly sit around there homes, and slowly start to drop without modern climate control and  medical assistance.  Given the energy the old folks portray, outside the obligatory tears, no one is too put out when they begin to drop.
One item that is believable is the amazing incompetence of everyone in tactical matters.  None of them have any current military training, and it shows.
The bad guys have an assassin hiding in the homey hamlet, and he wants to bump off the old preacher.  So he in the middle of coitus (really?) he sneaks off from his hiding place, and confronts the old guy in ….the most public place in town….. Where he proceeds to start up a conversation to explain why he needs to bump of the old guy.  Then instead of hitting him with a hammer, he starts to throw the old guy around.  At which point the police officer finally notices the commotion and clubs the guy in the back of the head:  √ one assassin.
Now if we switch to the good guys, it needs to be understood that various people have been casing out their hamlet from before the lights even went out.  They have heard gunshots in the distance, have seen attacks on fortified compounds, and have suffered attacks themselves.  So of course, they take almost no precautions when they are meandering out and about.  On one scouting mission to unsecured areas to look for extra supplies, the group of them are walking along in huddle whispering so as not to frighten the game.  Talking about a bunched up target.
Other descriptions clearly indicate that they have no concern for the exposing themselves over the military crest.  And the police officer seems to feel that his fully auto M16 is some sort of super weapon, rather than a good way to expend all your ammunition very quickly.
But bad guys are always spotted, because they always come from the predicable direction.  The idea of having an advanced scout at the trail head, and blazing a less obvious trail doesn't seem to be worth considering.   I could go on…
Which leaves us at what I feel is one of the greater flaws of the book.  Without the crazy pantheist fanatics, you have no problems.  Nobody in the communities steals foods.  Everyone has not only been able to stock up enough food for themselves, but also for all their neighbors as well, and the happy hamlets neighbors are the ones who have been doing all the heavy lifting fighting the fanatics.  All of which allows for a lot of character introspection and development, but seems to be somewhat detached from the direness of their situation.  Generally in a cosy catastrophe, the characters at least wait half a year before deciding that the new world is really a nicer place (fatalities aside) than the old.
So what is the net summation?
There is character development, and after awhile you can realize when the author is getting long winded and do some skimming.  After all, do people really read the entire birthing scene in Patriots?  The descriptions of the setting are well done; but as a moving drama there really is not much there.  Given the low literary bar for apocalyptic fiction in general, I would put it at the lower end of the worthwhile range.

Which is a shame, with a more plausible villains, or no (at least initially) intentional villains, and more concern for the likely much more dire situation of inexperienced modern people on their own in a harsh northern mountainous environment, you would have a very gripping story.  The author knows the setting, and with the introspection toned down at points he would have a story  that ranked at the top. 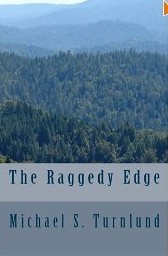