Before we go further with William Henry Waldron's scouting manual (part 1, part 2, part 3), I wanted to take a break and look at some graphic terrain presentations:  some maps.
Since his examples show woods and parallel ridge lines I have tried to find a location that had these features.  I also wanted to show the limitations and advantages of various presentations.
Ok, first let's add a road map: If you want to look for it yourself it is Mount Olivet Church Road 6.2 kilometers (3.8 miles) northeast of Franklinton, North Carolina.  There is nothing significant about this particular area, and I doubt I had ever been down any of these particular roads.  But I am familiar enough with the area to know that it has a lot of parrallel ridge lines and a lot of broken terrain.  Note the X for future reference. 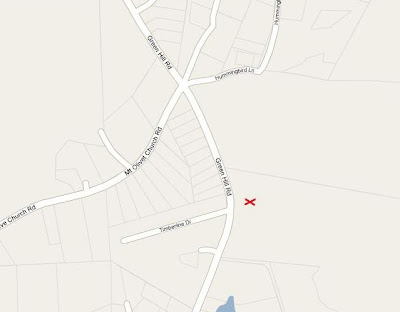 It does not tell you too much, I had to cut off the scale to make the sizing work, but it is 410 meters from the center of the Mt. Olivet Church Road intersection to the ﻿centerline of the Timberline Drive intersection with Greenhill Road.  The plot lines tell you there are likely to be some sort of buildings along the one side of Greenhill Road.

Now we will look at the satellite 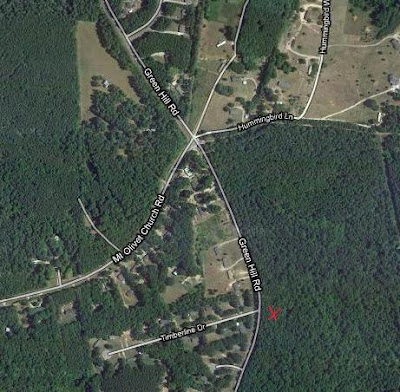 It is very difficult to read a satellite shot that is coming from directly above (no angle).   The lighter color roads are likely to be some sort of dirt road, as they will usually reflect more light than black top.  There are a lot of woods.
Then we can look at a rough isometric map  using the terrain feature on google maps. 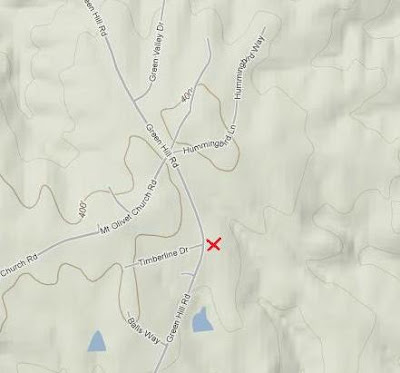 This is not a super detailed isometric map.  However, for the first time you are getting the idea that the area is relatively hilly-or at least uneven.  A close look at the isometric line shows "400."  This is going to be feet.  Franklinton lists at 459 feet above sea level.   You are above the fall line here.  It is just off the map to the right, but U.S. 1 roughly follows the east coast fall line.  On the upland side of the fall line, you are going to be in the Piedmont (hilly) region that leads up to the Appalachian Mountains.  Zebulon just on the other side of the fall line, is at 350' of elevation and the terrain flattens out considerably.  By the time you get to Greenville, NC-about half-way to the coast- you are at 150'.
Then we will get our first aerial (birds-eye) view from the same prospective (looking North).  Note the little red X is still there. 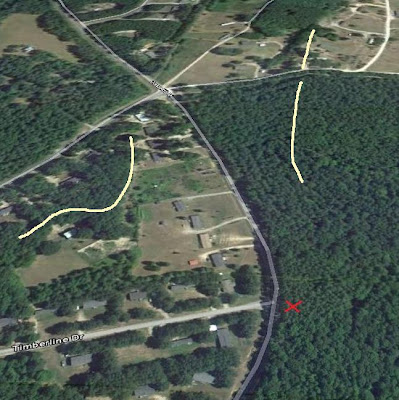 If the shot was a little less blurry, you would be seeing that the homes are either single story ranch homes or mobile homes.  The yellow lines I drew in are what appear to be slight ridge lines.  It is these ridge lines (ror maybe ripple would be more descriptive) that go a long way toward breaking up your lines of site and making shots much past 100 meters difficult in much of the east coast above the fall line.
Now we go for the google street view.  You can see the X. 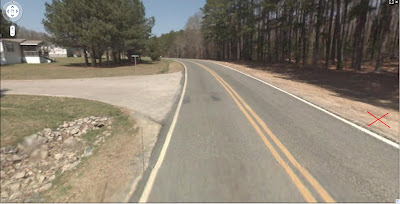 Roads are generally your longest unobstructed firing lines.  Oddly enough, you will often have longer potential shots in town-urban settings because of the flattened elevations, and lack of obstructions.  You also can see that these are "tooth pick" trees.  Relatively young secondary (tertiary?) growth forest.  In this case once you get past the woods edge they are fairly open.  This type of wood will slow you up, but don't make for terrific cover unless you are hiding/prone.  If you were to travel up and down this road, you would see what look like some fairly open mown grass fields.  But rarely is there more than 100 meters of unobstructed line of sight.
﻿
Finally we will use Bing to get an birds eye view from a different angle. 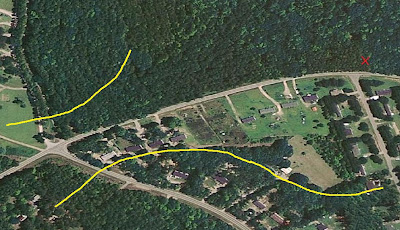 ﻿
Only with this view do you get a better view of the ridge lines, and you start to see the homes better.  You can also see some of the points illustrated earlier.
To illustrate:  You are at X.  If you are trying to bypass the area headed North toward the main junction, you can go straight into the wood line to the west of the road, and take a left turn when you hit the base of the ridge (ripple)  line.  It will be tricky, but as you get to the main road junction point you will hit the more open fields.  But recall that site lines are still only 100 meters, and the open terrain actually means that if you take care as to your path, there are actually fewer people around (people live in houses, not open fields) to see you.  If you stick to the base of the small knoll as you cross the open area, people beyond the  peak of the knoll will not be able to see you as well and hopefully you will not be at a high enough elevation that people in the residential area will easily see you.  Since Green Hill Road runs east-west, if you can wait for dawn or dusk the open field will be in the shadows of the trees that border, it but you would have enough natural light not to run into a tree.  In is sense you are trying to tuck yourself into the crease of the hill.  After you cross the open area you would want to avoid traveling in a straight line through the woods as that will allow locals to get ahead or at least try and head you off.
If for some reason you are trying to investigate the area, you are going to need to get closer to the houses.  But there is still an overlooking bluff  on the west side of the road which can be used to break up the longer side lines.  These houses are narrow and far apart, but if taken in series homes often do an excellent job of masking an approach.  If you take the triangle of Mount Ollivet and Timberline with Greenhill being the base, the outer edge of homes along Mount Ollivet and Timberline appear to be particularly easy to approach.
The area is so broken up, I don't see much in the way of good observation points that don't involve a tree stand.  If you were told you had to, I would probably go for the clump of woods in the middle of the triangle at some point where the elevation change would allow me to see the furthest, and with a reasonable retreat in all directions.  The open fields look problematic, but remember that someone looking form the homes along Mount Ollivet probably cannot see down below the line of the bluff well into the open fields.  The other possilbe point would be at the house that sticks out in front of its adjacent neighbors at the corner of the major intersection.  That might have the best view down two of the roads, but you would be very exposed if you 50 post apocalyptic biker-dudes come motering up one of the roads, and you decide to make a break for it.
Posted by russell1200 at 1:52 PM