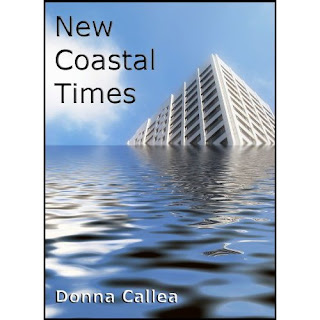 The New Coastal Times is an e-book by Donna Callea  is a post-apocalyptic tale that takes us through a personal apocalyptic moment in the form of a seaside town on the east coast of Central Florida, and then in a more general way the overall collapse of the country.
The primary initiators of the countrywide collapse culprits are global warming induced hurricanes, assists from terrorism, peak oil, and an untimely earthquake-Tsunami in California.  Except through the personal story involving a mega Cat 5 hurricane named Walter, most of the other disasters are mentioned, but not detailed.  The collapse could be roughly categorized as a quick total collapse for a few, a quick partial collapse for many, and a slow strangle collapse for just about everyone.  There is still a government, there is still money, but most people don't have much money, and government aid is limited to emergency food handouts.
It is also one of the most determinedly cheerful apocalyptic novels you will run across, with a definite sarcastic Yankee bite to the humor.
Almost at the very start, our heroine is trying to ride out the mega-hurricane in her employers small newspaper office.

"This isn't a g_d_ hootenanny for C_'s sake.  This is the big one. The ocean is swallowing buildings whole, and we're sitting here listing to [the boss] Yvette sing f_ing show tunes?"

This is pretty common to the tone of much of the novel, particularly the early novels.  One suspects she wrote her biography at Amazon as well:

Before Donna became a novelist, she was an award-winning journalist. OK. She didn't win any awards you might have heard about. We're not talking Pulitzers here. But she did work as a reporter for a minor metropolitan newspaper for a number of years, during which time she wrote numerous stories that elicited laughter, tears, outrage, civic pride, civic shame-- and won a few prizes. But not any Pulitzers.

The lightheartedness at times is somewhat at odd at times with the general content and theme of the story.  Her heroin  is a rather frisky lady who spends alot of time discussing her husbands private parts, her name for these private parts, and much of the usual newly wed baby talk that only newlywed couples enjoy.  All of this is at least on point with the books major therme.
The major theme of the novel is that happiness is found within.  If you have the bare necessities, and people around you that you love, you have the minimum requirements for happiness.  If you have those items, and you are not happy, the problem may not be your circumstances, but yourself.

When I was kid I used to like reading sci-fi novels, some of which painted very bleak and depressing scenarios of the future. But this was not how I'd ever imagined the future.  And anyway, I wasn't the future.  It was the present.
Besides like I said, all things considered, it really wasn't that bad.  Nor for us.  At least Aaron and I were together.  That was the main thing.

They eventually make a trip from Central Florida to their native Buffalo, New York.  The few areas in reasonable condition are under martial law.  The noted "Aaron" is a general practitioner, so is not likely to be left starving, but most people are subsisting on government handouts.  Electricity is available, but only at great cost, and gasoline is almost unseen.  Vehicles that can run on diesel-cooking oil are about the only thing that can keep going: and even there on a very limited basis.
In summation, it is a rather nice, a bit light hearted, apocolyptic transition novel.  The idea that joy and satisfaction are not within your circumstances, but within you,  is a very compelling one that more novels of this type should probably remember. 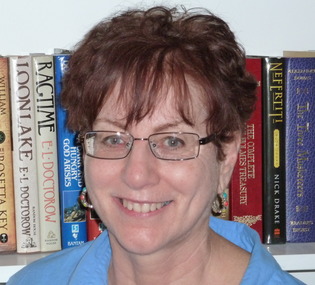