There had been some discussion about Japan being the first Domino to collapse in the house of cards known as the world economy.  Well some of the first numbers are out and they are not very good.  There is some hope that the additional money spent to repair all the earthquake and tsunami damage will boost the economy, but the government is already carrying so much debt they are going to be having a hard time covering their non-discretionary costs as it is.
Japan Slides Into Recession
Takashi Nakamichi, Wall Street Journal, 19 May 2011
TOKYO—Japan's economy contracted at a much-worse-than-expected 3.7% annualized rate in the January-March period, tipping the country into a recession as the March 11 earthquake and tsunami caused declines in consumer spending, business investment and private-sector inventories....
The contraction was almost double the annualized 2.0% drop expected by economists surveyed by Dow Jones Newswires. GDP, or the total value of goods and services produced by the nation, shrank a revised annualized 3.0% in October-December.
The first quarter decline was the sharpest since a record 18.3% contraction in January-March 2009, according to the data.
The supply problems in the world's third-largest economy also hit some of Japan's trade partners. U.S. manufacturing output fell 0.4% on month in April, the first decline in 10 months, as Japan's disaster limited the supply of parts needed to assemble cars in the U.S.

Bloomberg details:
The March disaster hit an economy already weighed down by years of deflation and subdued consumer spending.
While real GDP was down 3.7% in the quarter (annualized basis), nominal GDP was down an even higher 5.2% due to continued deflation. The chart below shows that nominal GDP is now at an almost 20 year low, hitting the lowest point since June 1991. 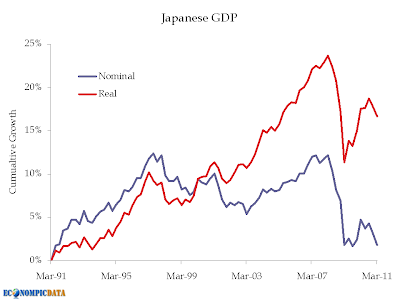 For a country indebted with an increasing amount of nominal debt, it makes you wonder how they will ever be able to get out of this situation.
Posted by russell1200 at 5:32 AM