Again, we continue with William Waldron's pre-WW1 manual on scouting and patroling.

Methods
Should you find it necessary to advance across a succession of open parallel ridges on one of which is is possible that you will find a patrol of the enemy, the procedure would normally be; Having made your way to the crest of the first ridge, observe the second for signs of the enemy.  If you are unable to determine definitely whether it is occupied assume that it is and proceed to out-maneuver your unseen opponent.  If you want to get anywhere, you have to keep pushing along.  Get up and cross the ridge taking advantage of any available cover, go down the hill, and when you reach the valley, move rapidly to a flank for several hundred yards and then go up the hill.  There is usually a strip of ground at the bottom that is not visible from the topographic crest of the hill and your move to the flank will be out of the range of vision of a concealed enemy.  If the enemy is on the hill, he will probably be watching for you were you would have to come up had you continued on your, course, and the diversion of attention will place you in a favorable position. (see example).

﻿﻿
﻿﻿
﻿﻿ ﻿﻿
Never emerge from woods into a clearing in prolongation of your route before entering the woods.  The enemy may be laying a trap for you, and if you appear at an unexpected point, his plans will be upset. (See example). 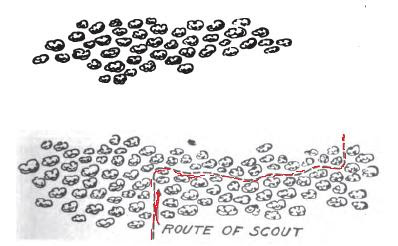 You should never enter an enclosure, artificial or natural, until you have made doubly sure that your retreat by your original entrance is secure or that there are one or more other outlets that can be used in an emergency.  Never enter a house alone.  Keep away from farm houses and corrals.  Do not use a road or trail with a high cliff on one side and an impassable water course on the other get up on top of the cliff.  Avoid fields where there is a succession of wire fences to climb, for you will lose time in getting over them, and you present a good target for a marksman while so doing.  Should you have mounted and left your horse to continue on foot, he should be in a position where he can be quickly mounted and the start made at a gallop.  Should a bicycle be used, it should be left facing in the direction of your retreat and at the top of rise from which point advantage can be taken of a flying start.  If you are working on foot, it is usually best to make for broken ground or woods where a horseman would be at a disadvantage.
When moving at night, keep in the hollows as much as possible so as to be able to watch the sky line all around you.
When advancing toward an opponent, it is better to have the sun shining in your face than to have it shining directly behind you.  In the former case, there will be few shadows cast by your person, while in the latter, your front will be all shadow darkly outlined against almost any background that may be behind you.
If you can possibly avoid it, do not move across an open space where the enemy may be able to spot you from a position on your flank.  Any movement of this kind that you may make by a flank will be almost sure to be observed.
It will often be well when firing over a wall or embankment to place a few hats several yards to the flank of your actual location.  They may serve to draw many of the enemy’s bullets away from you.  This trick is well known to experienced scouts, for it is a well known fact that one will aim at what can be seen.  For example, in our field firing if there is a figure that is less visible than the others through having a blending background; the chances are about five to one that the figure will not receive a hit.
In dodging an enemy around the outside of a house or building, always work around contra-clockwise, for you will (if a right-handed shooter) then be able to shoot around the corner without exposing yourself as much as your opponent.
Posted by russell1200 at 5:00 AM